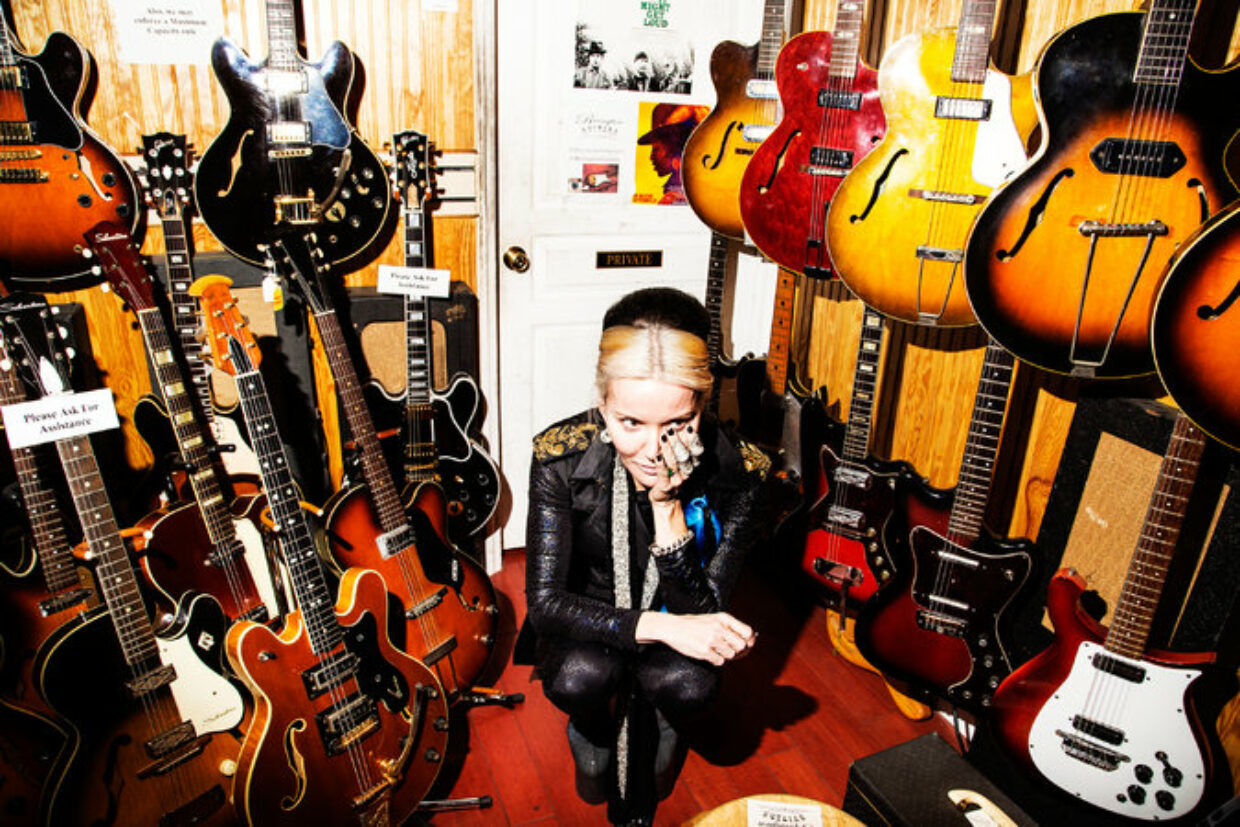 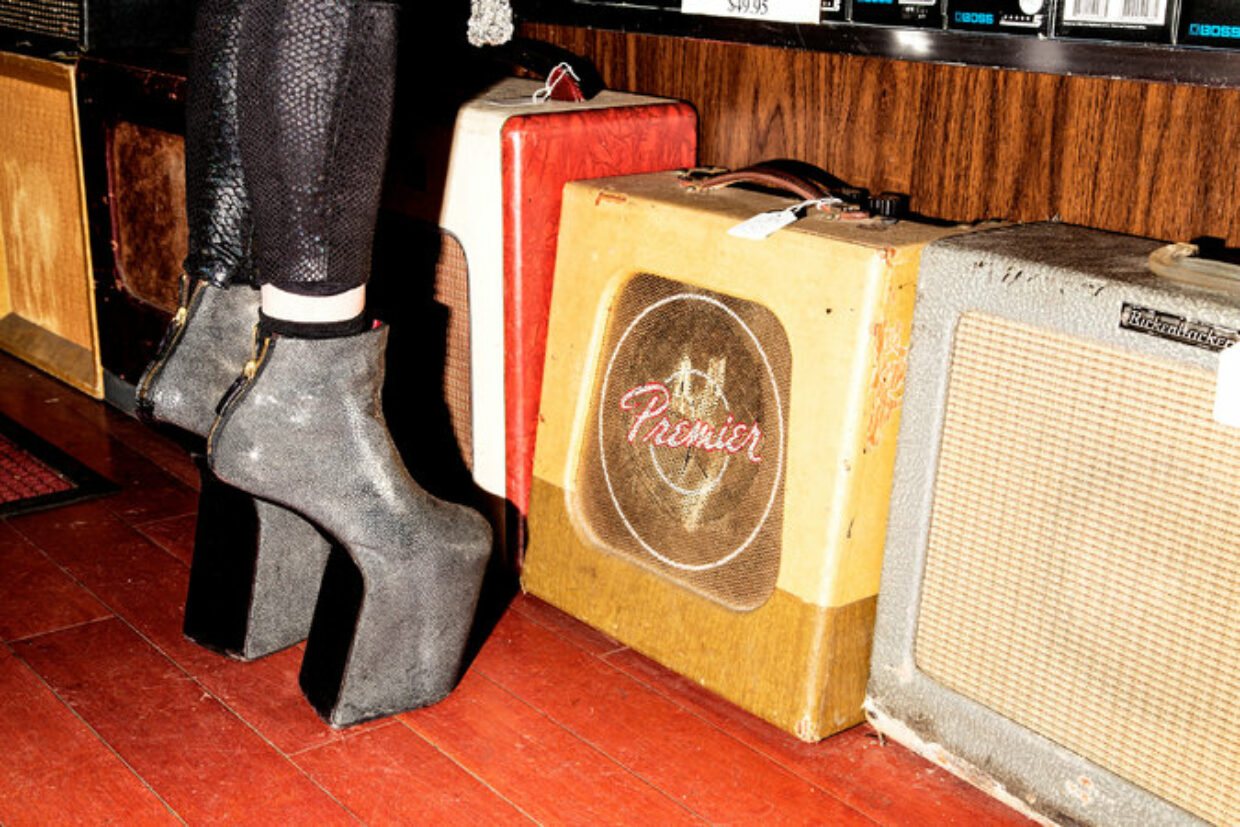 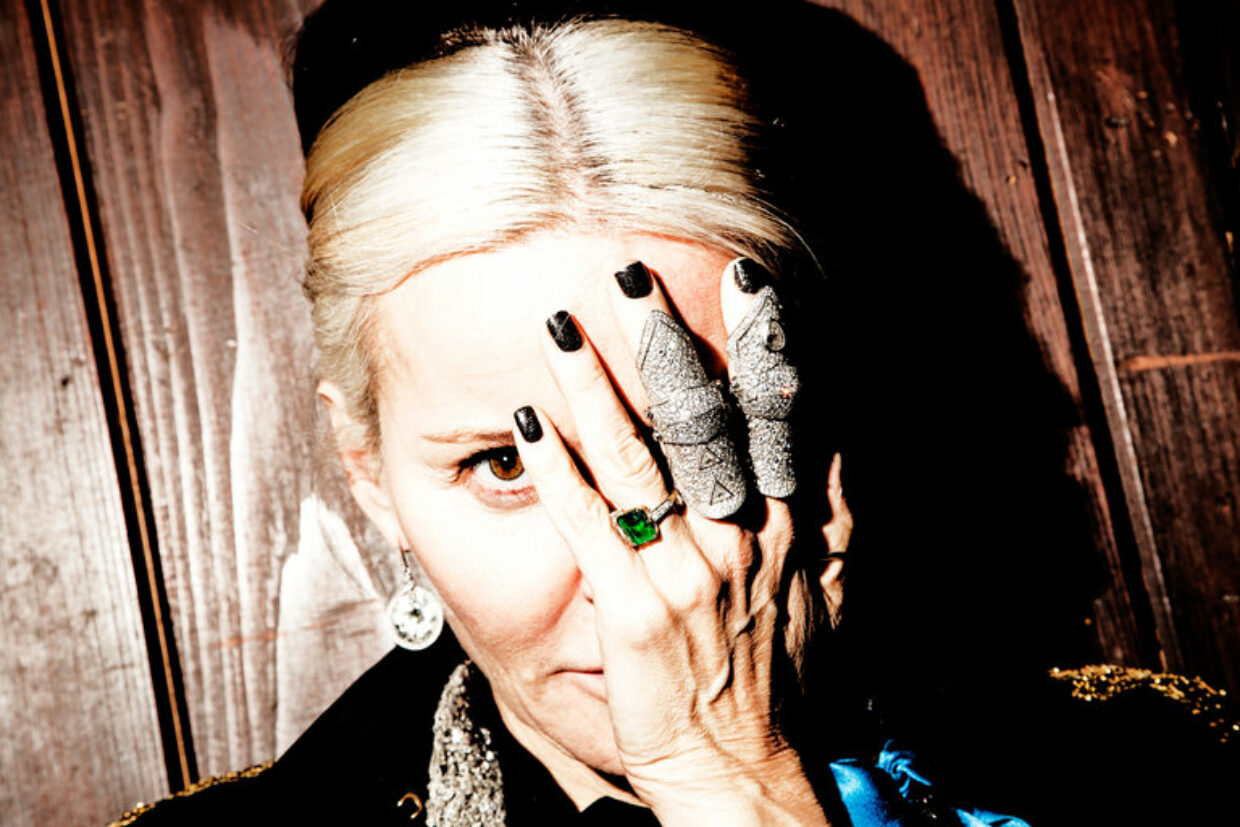 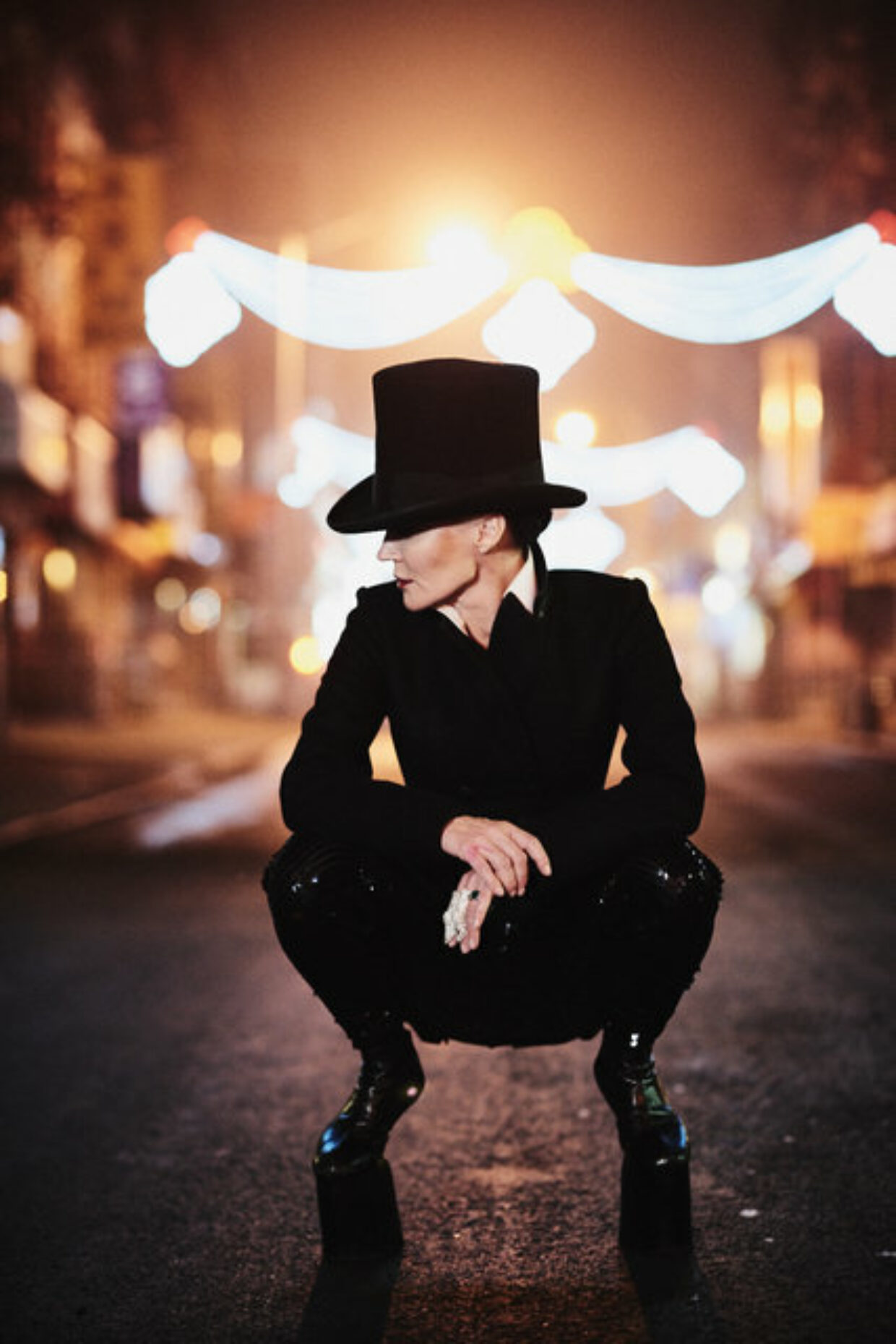 For Daphne Guinness, the World Is a Stage

Daphne Guinness (the Honourable, to use her proper title) was teetering on her usual heelless skyscraper shoes through Rivington Guitars a few weeks ago, addressing herself to guitars, pedals and amps with the awed focus and connoisseur’s eye she once brought to the salons of haute couture.

Spindly and unnaturally elevated, in a reptile-patterned catsuit under a lavishly embroidered vest by Alexander McQueen, a minor heist’s worth of diamonds and gemstones encircling her fingers, she cut a noticeable figure in the crowded East Village shop.

“Jimi Hendrix used that,” she said, nodding down at one pedal, and peppered a store employee with requests for rare and obscure pieces: Rickenbacker guitars, Mellotron keyboards. If the staff had been tempted to underestimate her, they soon thought better of it.

“Everything she’s asking for is what I call a ‘Holy Grail item,’” said Geoff Bennington, the store’s manager.

He took her email address to alert her should any of them come into the store in the future, and she took a four-figure, one-of-a-kind guitar. An assistant swept in behind her to pay.

Ms. Guinness, 48 — an heir to the Guinness brewery fortune; a baron’s daughter; a descendant of the Mitford clan; and famous in fashion and society circles as a muse, a patroness, a couture client, a socialite and an artist — is adding another title to her CV: rock musician.

In her previous incarnations, much-photographed and gawped at (Lady Gaga is one of many professed fans), she was both her own model and her own work, an artist of dressing up who made the world her own sort of catwalk, and who makes no apparent distinction between the catwalk and the world. (For one memorable performance, she got dressed in a street-facing window at Barneys.)

“It’s not like she changes into jeans or anything,” said her friend Nick Knight, the photographer. “I don’t think she has any.”

But as a model, front-row fixture and “fashion person’s fashion person” (as W Magazine referred to her in 2009), Ms. Guinness has been rather more seen than heard. With “Optimist in Black,” her first album, which arrives this week, she is having her say.

Ms. Guinness wrote the album with the Irish musician Pat Donne and used her own lyrics, which tend toward the grim and the arch, pronouncements from a life lived, not always happily, on high. (“There’s no nirvana of cooldom,” is a typical pronouncement, as well as a song title.)

She is a child of the ’60s, and her songs have a glam-rock-ish, slightly psychedelic flavor, anchored by her Sprechstimme vocals, a deadpan delivery equal parts Nico and Marlene Dietrich. Her inspirations, to hear her tell it, are all of ’60s vintage.

“Dylan was the first person to turn me on to stuff,” she said. “Then it was the Doors, Jefferson Airplane, Small Faces, Marc Bolan.” David Bowie, another major influence, was someone she discovered “a bit late” in her musical development, she said: “I was 6 years old.”

Mr. Bowie’s friend and longtime producer, Tony Visconti, ended up producing the album, after initial hesitation. “David Bowie told me I should at least meet her, so I did,” Mr. Visconti wrote in an email. “In a way, David was a bit like a godfather to the album.” Mr. Bowie stopped by the studio twice during the recording to give a listen.

Ms. Guinness had sung as a child and planned to study opera at the Guildhall School in London. Her marriage, at 19, to the Greek shipping heir Spyros Niarchos curtailed that ambition, at least publicly. “It wasn’t encouraged when I was married,” she said, “but I was singing.”

The eventual spur to songwriting came with the death of her half brother Jasper in 2011, which followed the deaths of her close friends Isabella Blow and Mr. McQueen. “All my friends have died,” Ms. Guinness said.

Her response was the title track on “Optimist in Black,” an elliptical ode to those who have gone. “They made for the exit,” Ms. Guinness chants, “the shining light of the exit.” (She called recording the song the nadir of the album experience.)

Ms. Guinness has been yoked — by choice and by circumstance — to Mr. McQueen and Ms. Blow since their deaths, and has become a de facto ambassador of their legacies. She bought Ms. Blow’s entire archive of clothing (including much by Mr. McQueen) and established the Isabella Blow Foundation, which provides scholarships to art and fashion students and supports charities working on mental health.

In the weeks leading up to the album’s release, she traveled to Australia for an exhibition of pieces from the Blow collection at the Powerhouse Museum near Sydney. Speaking by phone from London afterward, she sounded exhausted and miserable.

“It’s very difficult to be thrown all over the globe, to still be the poster child of fashion suicides,” she said. She spoke of reorganizing the foundation in order to take a step back from it, though she will remain attached and its figurehead. “I’m glad it’s working out, but I need to live my life, not all my friends’ deaths. Of course I’ll be there if they really need me. But for my own sanity, I have to.”

According to friends, the album has been part of a necessary catharsis.

“She was very close to Lee and to Isabella, and very tragically that all came to an end,” Mr. Knight said, referring to Mr. McQueen by his given name. “I think it left a lot of us feeling, ‘O.K., well, what do you do?’ Because you were close to them, you became a guardian of their memory, and to some degree you feel a certain responsibility for presenting them how they ought to be seen. I think she got caught up in that: She wanted not just to be that. The music is in some degree cathartic for her.”

Mr. Knight did his part to help by shooting a music video for “Fatal Flaw,”another of the album’s songs; other friends, like David LaChapelle and Luca Pizzaroni, directed others. (Mr. Knight had previously cast Ms. Guinness as Prospero in a short film adaptation of “The Tempest,” in which Ms. Guinness joined the Riddles, a rock band portraying the tempest itself, onstage to thrash.)

On the eve of the album’s release, Ms. Guinness said she felt excited and frightened. She has been performing her first small gigs, nervous enough to vomit before many of them, not that her stage persona differs markedly from her offstage one.

“She is onstage,” said her friend Sabine Getty, the jewelry designer whose Roman wedding last year Ms. Guinness attended in a black gown, mantilla and headphones. “She doesn’t even need to try.”

Before the album, she had rarely if ever performed publicly, and claimed she began recording without any intention of ever releasing the songs.

“Release?” Ms. Guinness asked theatrically. “I don’t know how to release my snake into the street! How do you release anything these days?” (When pressed, she acknowledged having had three snakes — “They’re nice. They’ve got very, very short memories, like lots of people.” — two of which she returned and one of which escaped.)

But of course, “Optimist” will be released, to a listening public that may or may not be familiar with her. Even Mr. Visconti said he knew of her only vaguely before they worked together. Early reviews have been warm, and Mr. Visconti, a tough critic if not an entirely impartial one, praised her “refreshing voice” and “compelling” stories.

Ms. Guinness is already at work on more music. She plans to record new songs with Mr. Visconti this summer, and has no plans to attend the couture shows in July.