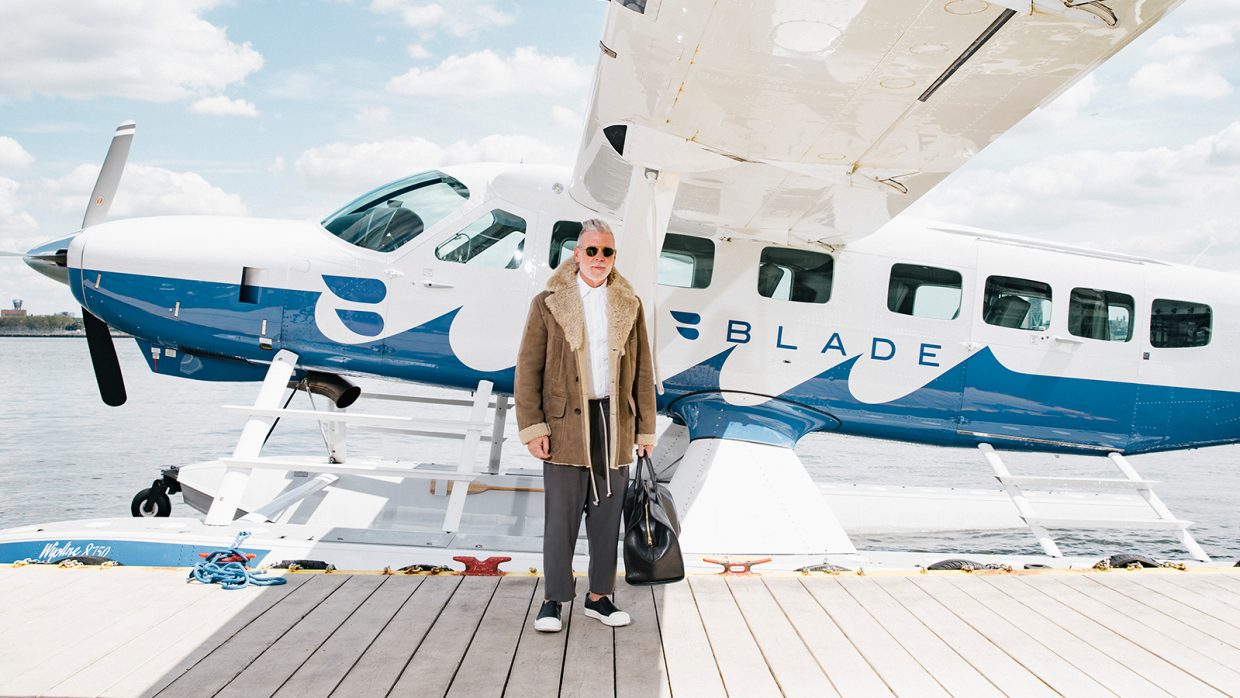 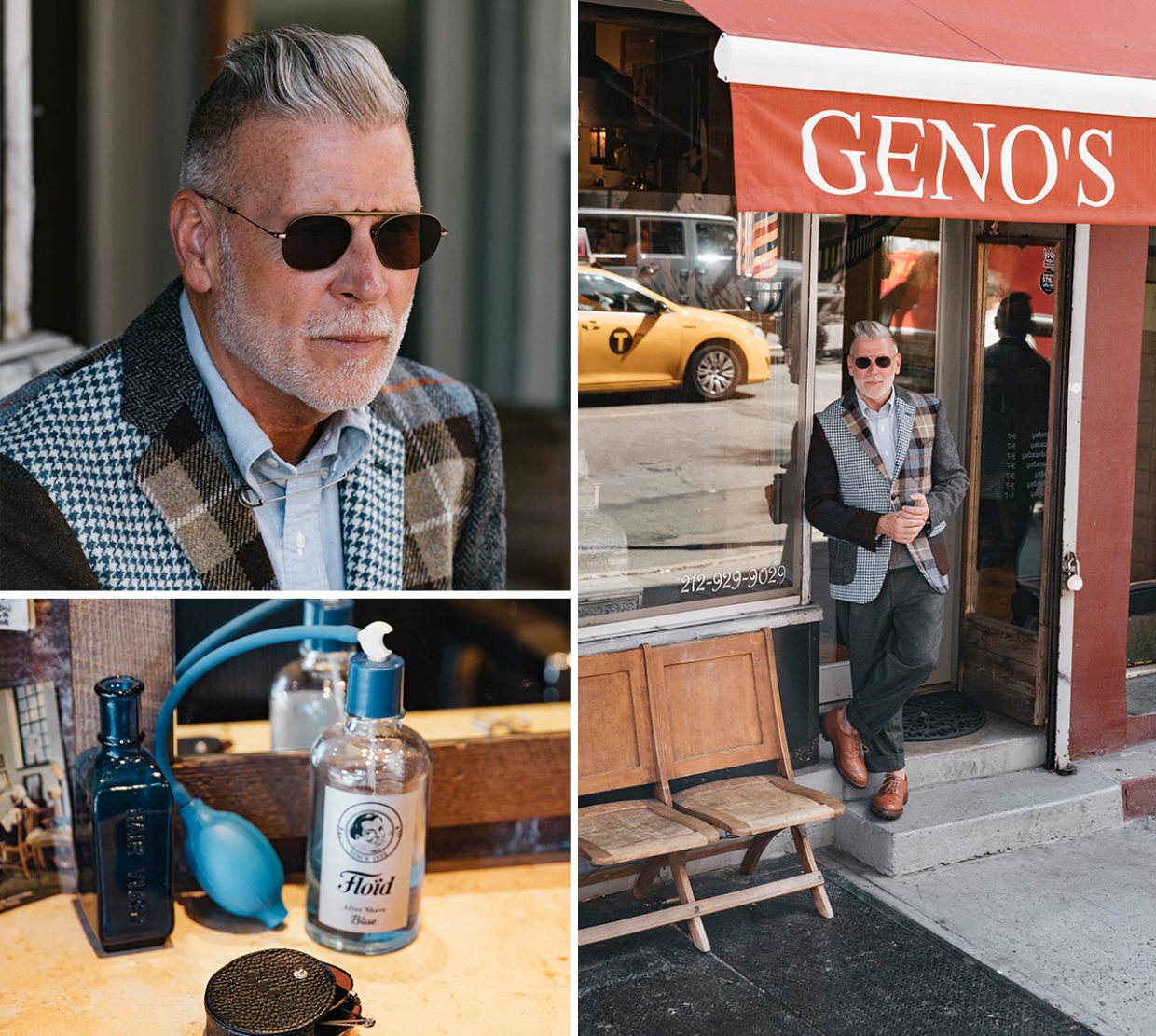 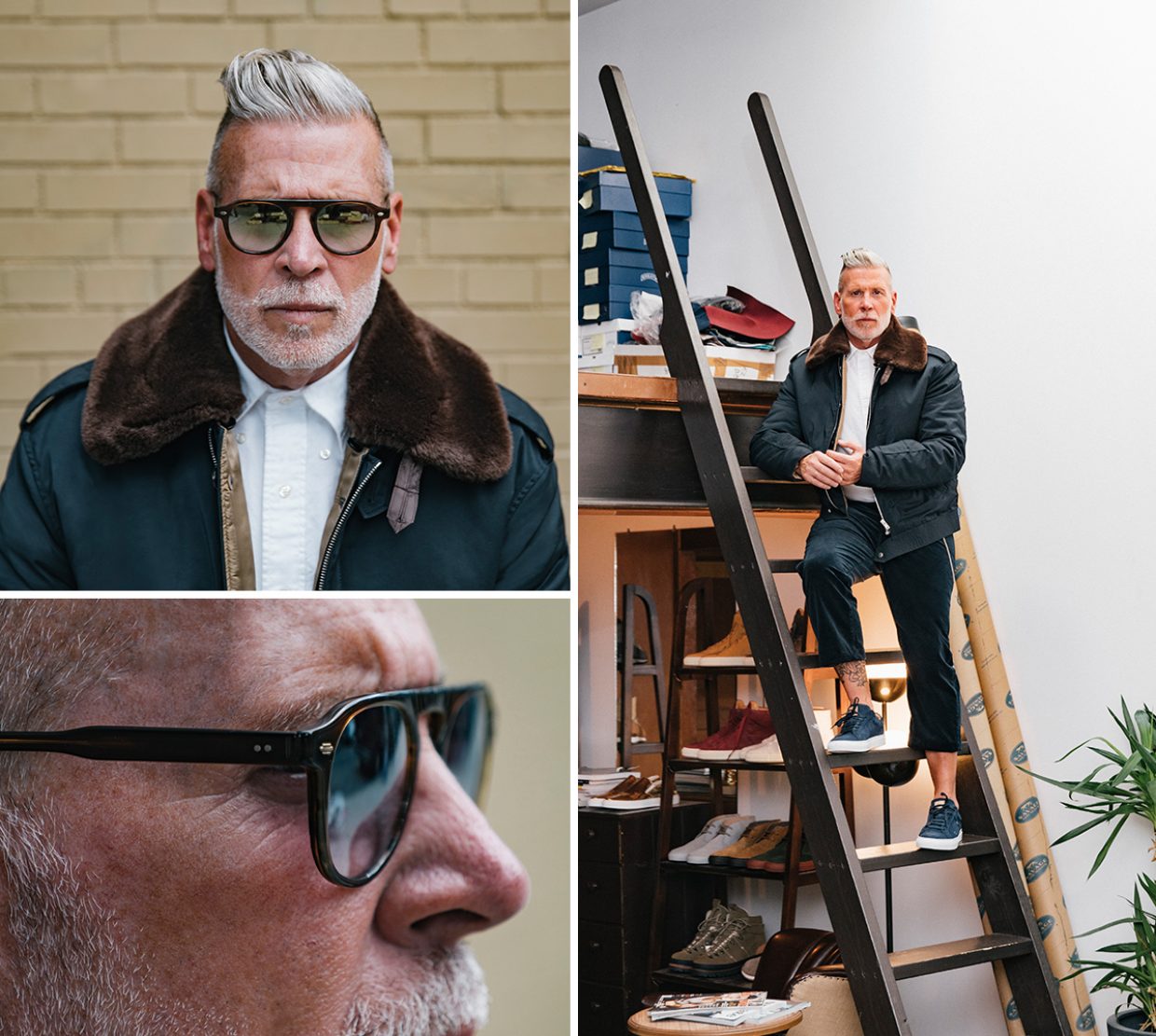 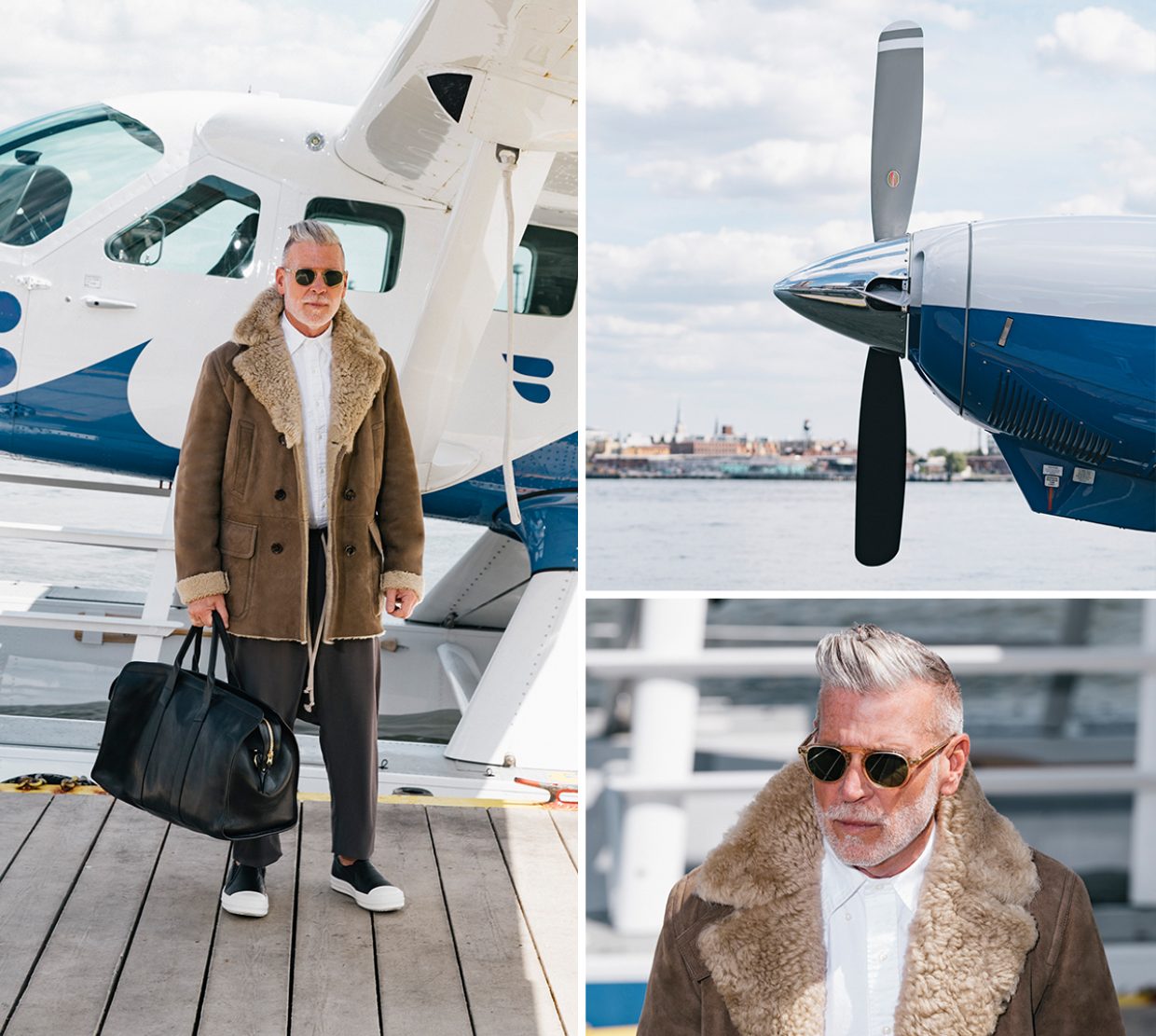 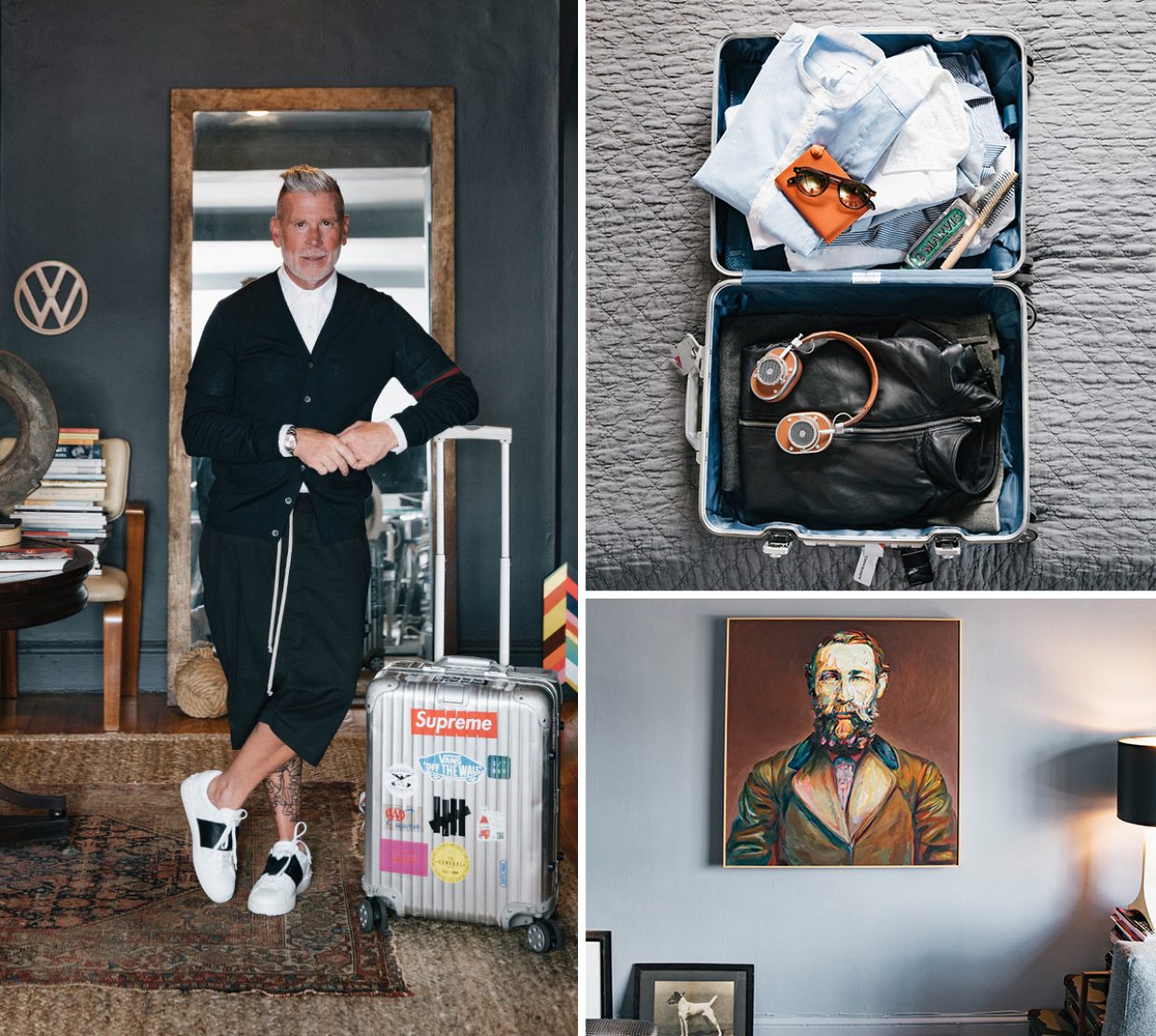 It happens almost immediately. We’ve just sat down at an outdoor table of Morandi, an Italian restaurant around the corner from where Mr Nick Wooster lives in Manhattan’s West Village. We’re about to order lunch when a passer-by recognises him, does a double take, stops and then reaches for his iPhone to take a picture of Mr Wooster. He doesn’t bat an eyelid – he’s used to it – and anyway, this is how it all started five years ago, long before Instagram and back when street style wasn’t yet a thing.

On 16 January 2010, Mr Wooster, then 49, and men’s fashion director of a New York department store, put on a J.Crew black and white herringbone Harris Tweed jacket, Carpe Diem boots and RRL jodhpurs (yes, jodhpurs) and went to the first day of Milan’s menswear fashion shows. “I just got dressed and went to work,” he says in a matter-of-fact way. That day, two men in the street took his photograph and posted the pictures online. One was Mr Scott Schuman aka The Sartorialist, and the other was Mr Tommy Ton – the two foremost men’s street-style photographers in the world. Overnight, Mr Wooster’s life changed. The pictures went viral. “It was a lottery-winning moment,” he says.

Since then Mr Wooster, now 55, has begun a new life as a menswear icon, with blogs ruminating on what he’s wearing, his tattoos and how he’s chosen to style the grey hair on his head or the white whiskers on his face. He helped to pioneer the popularity of the beard, the hipster moustache, tattoo sleeves and the pompadour quiff. “Actually, I have to credit Paul Burros, my barber from when I lived in LA, with that,” says Mr Wooster. “It was he who first suggested back in 2008 that I grow out my crew cut and try a beard and handlebar moustache.”

“I’m working harder than ever, but it’s on my terms. So  when I say I’m leaving to go to the beach, I don’t have to ask anymore”

Mr Wooster’s bubble shows no sign of bursting. His Instagram following has more than doubled in the past year to pass 500,000. “I actually hit the half million mark on the 20th anniversary of the day I finally quit drinking – which was the landmark day I chose to quit smoking,” he says. “That felt like a happy coincidence.”

Earlier this year, he launched his own line of clothing, Wooster + Lardini, and its second season recently arrived on MR PORTER. (Lardini is a respected Italian tailoring company that makes suits for the likes of Burberry and Ferragamo.) “I’m the world’s oldest start-up!” he says. “I’m working harder than ever, but it’s on my terms. So when I say I’m leaving to go to the beach at 1pm or I’m off to Italy for a week, I don’t have to ask anymore.”

Mr Wooster is forever travelling. So far this year, he has clocked up 125,000 miles on business trips – and given that he is travelling for the rest of the year, he estimates that he might even reach 250,000 miles. But New York is his base. “The great thing about New York is that the neighbourhoods are so close to one another, yet they have their own distinctive feel. The West Village has been my home on and off for 30 years, and I love how it retains the feel of local stores – my tailor, barber and shoemaker are all within 100 feet of my door,” he says of the key support systems for every gentleman.

“I am a fan of the sartorial equivalent of a mullet, where you’re business on top and party on the bottom”

Having worked for Ralph Lauren, Calvin Klein and Thom Browne, Mr Wooster’s one-bedroom apartment resembles an upscale menswear boutique. This being Manhattan, the furniture does double-duty: a vintage drinks cabinet stores T-shirts, the oven is full of sweaters, and two matching Ikea bookshelves artfully display the boots and shoes he can’t fit into his impressively ordered but over-spilling cupboards.

Mr Wooster’s basic formula is deceptively simple: he keeps one half of his outfit simple and has fun with the other half. “I am a fan of the sartorial equivalent of a mullet, where you’re business on top and party on the bottom or vice versa,” he says of his personal aesthetic.

He is renowned for his bold sense of style – pairing elaborately patterned tailoring with something contemporary and unexpected such as drop-crotch shorts or neon sneakers. And jodhpurs. “I’m an amalgamator, like a DJ, taking two things that don’t go together and making them go together.” Like tailoring and tattoos, or camo print and Prince of Wales check.

“The unifier is the colour grey,” Mr Wooster says. “I’ve worked in stores long enough to understand about display and balance. And I think that is what getting dressed is about: if you get enough of the right things together, it’s going to work out.”

Here, the internet’s best-dressed 50-something takes us on a walking tour of his favourite New York haunts and shares his sartorial advice en route.

“This is me arriving back home after another overseas trip. I am a chronic over-packer so I am constantly paying excess baggage fees. My problem is that I’m indecisive and I like to have options rather than plan outfits in advance. I approach packing like a game of Tetris: I make use of every available inch just as I do in my apartment. It’s a New Yorker’s skill.

“I keep all my travel perennials: underwear, sunglasses, grooming products and chargers pre-packed and in one place so I don’t have to think about them. What I wear to travel in is comfortable but not sloppy in case I get an upgrade. Rick Owens pants are my go-to because you can also sleep in them, and I cocoon myself in a cosy knit like thisGucci cardigan and wear loose shoes so my feet don’t swell.”

“The way I get dressed is actually quite simple. I usually start with some variation of dark pant – whether it’s a chino or drop-crotch shorts or woollen tailoring. I always wear a Brooks Brothers oxford shirt in white or pale blue which I never iron, I just wear them wrinkled. Then the only things that change are the shoes, jacket and outerwear. This jacket here is a product of my indecision. I love Harris Tweed and when we were buying fabric for Wooster + Lardini, I couldn’t choose between the tweeds so I bought a little of each. There’s a lot going on here, but it works because the rest of the outfit is plain.

“When I get back to New York after a trip, pretty much the first thing I do is go and see Geno, my barber. I feel dirty if I go more than two weeks without a haircut and beard trim, so when I travel I am sometimes forced to cheat on Geno. But I try and stick to people I know. The trust a man builds up with his barber is vital.”

“I do not cook at home, so Morandi is essentially an extension of my apartment. It’s a West Village icon that is 30 seconds from my front door and I probably eat 40 to 50 per cent of my meals here. I hold a lot of my business meetings here, too. They really look after their regulars.

“My diet comes and goes. I’m not a model, I’m just a regular guy, and I’m short so Japanese brands tend to fit me well. These tweed pants with a raw edge are by Sacai, for example. This jacket is from By Walid, which is not Japanese but it has that feel. Walid has such a fine appreciation for vintage textiles, and out of the blender of his mind he produces these unique pieces. They’re expensive, but you get what you pay for and they have an heirloom quality.”

“I have a lot of tattoos, but I made the very conscious decision not to have any tattoos on my hands or neck so I can wear a suit and no one need know. I like my tattoos, but if I could go back I wouldn’t do colour – I’d keep it black and white. Colour requires too much upkeep.

“In the summer I show my ankles, but actually I’m always wearing secret socks otherwise my feet would be destroyed and my shoes would stink. Falke do the best no-show socks. As part of my Wooster + Lardini line, I’ve been working with Brooklyn-based sneaker company Greats to do the footwear and I head over to their studio in Williamsburg occasionally to catch up with them and talk through designs.

“This bomber jacket from Maison Margiela is a great layer for fall. The faux-fur trim is detachable. It’s an investment piece: bombers have been around since WWII and they never go out of fashion.”

“All New Yorkers – in fact, anyone who lives in a busy city – needs to escape it sometimes. And to be able to do so quickly is a luxury. The seaplane base is 10 minutes from my apartment, and then it takes just 20 minutes to get to Fire Island where I rent a house. I love Fire Island in the off-season, right up until the end of October. It’s not as busy and the light is incredible. I find sunglasses a necessity outdoors at all times of year. I had LASIK [laser eye surgery] 13 years ago, which was a life-changing operation, but it has left me with light-sensitive eyes. I mostly wear Garrett Leight, Oliver Peoples, Moscot and Ray-Ban.