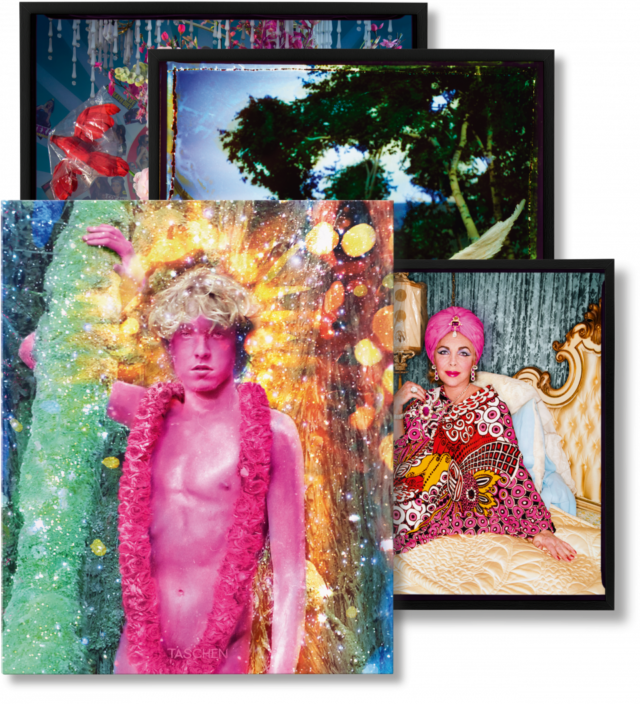 David LaChapelle returns with his first new publication in a decade. This two-volume collection narrates the photographer’s career through his own lens; the first tome traces LaChapelle’s rise in the heat of 1980s New York, while the second explores his spiritual and artistic renaissance in 2006–2016. Together, they constitute an unparalleled visual map to the inner workings of a unique creative mind.

Art Edition of 500 copies, each with three prints signed by David LaChapelle

Nurtured under Warhol’s wing in the ’80s, hailed as the Fellini of photography in the ’90s, emerging from a retreat in rural Hawaii in the noughties, David LaChapelle has spent the past three decades shooting some of the most luminous stars of his generation and transforming the realms of fashion and celebrity, sex and style with his own distinct, unorthodox aesthetics.

In this exclusive Art Edition, the artist’s first publication in a decade, TASCHEN presents two defining periods in LaChapelle’s career: his rise to stardom in the white heat of ’80s New York, and his creative renaissance following his “disappearance” from the fashion scene, post-2006.

Volume 1, Lost + Found, traces LaChapelle’s emergence through Warhol’s Interview magazine and his ascent to the status of global icon in the fashion world. Meanwhile, Good News explores LaChapelle’s spiritual and artistic revival following his retreat to a rural idyll in West Maui, Hawaii.

This Art Edition represents a typographical map to a dizzyingly creative mind, presenting over 300 unpublished works to trace LaChapelle’s career through his very own lens. Along the way, we encounter such high-voltage subjects as Miley Cyrus, Amy Winehouse, Michael Jackson, Lady Gaga, Tupac, and Naomi Campbell, as well as LaChapelle’s stylistic experimentation throughout the years, spanning classical, Baroque, and Pop art elements. We follow his ascent to the apex of glamour and his subsequent thematic exploration of consumerism, redemption, and spirituality.

From the controversial Rape of Africa (2009) series and the Kardashian-heavy Black Friday at Mall of the Apocalypse (2013) to the classic Angels, Saints and Martyrs (1984) and the brand new Paradise (2017), this is an intimate tour through LaChapelle’s thematic evolution, narrated by the world-class photographer himself. Throughout, we discover an unrivaled critical and creative eye, in thrall to hyper-polished sexuality, as much as to the profound questions of human existence.

Also available as two unlimited volumes: Lost + Found, Part I and Good News, Part II.
The photographer
David LaChapelle was offered his first professional job by Andy Warhol to shoot for Interview magazine. Since then his work has been exhibited in galleries and museums worldwide, including Tony Shafrazi Gallery and Deitch Projects in New York, and London’s Barbican. His images have appeared in countless magazines including Vogue Italia, French Vogue, Vanity Fair, Rolling Stone and i-D. In recent years he has expanded into music videos, live theatrical events and documentary film-making. 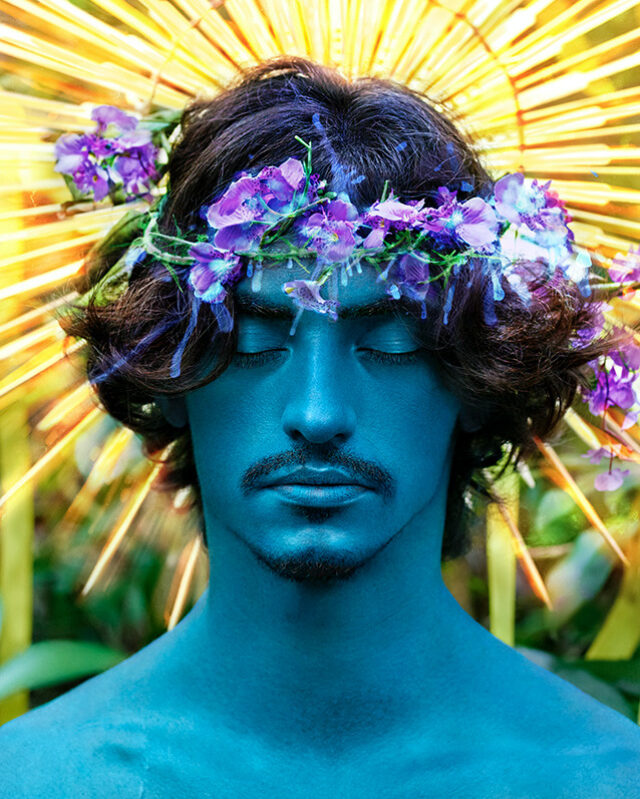 TASCHEN is proud to announce Lost + Founds, Part I and Good News, Part II, the long-awaiting, latest and final publications from atist David LaChapelle. The books are the Fourth and Fifth installments of Lachapelle’s five-book anthology, which began with LaChapelle Land (1996), Continued with Hotel LaChapelle (1999), and Followed by Heaven to Hell (2006).

Good News is a 278-page book that follows a creative renaissance by David LaChapelle’s five-book anthology, which began with LaChapelle Land (1996), continued with Hotel LaChapelle (1999) and left off with Heaven to Hell (2006).

Featuring a monumental Curation of images which have never before been published in book form, a sublime and arresting new body of work attempts to photograph that which can’t be photographed.

Good News completes LaChapelle’s narrative in a collection of books which has captivated a generation of viewers across the globe. 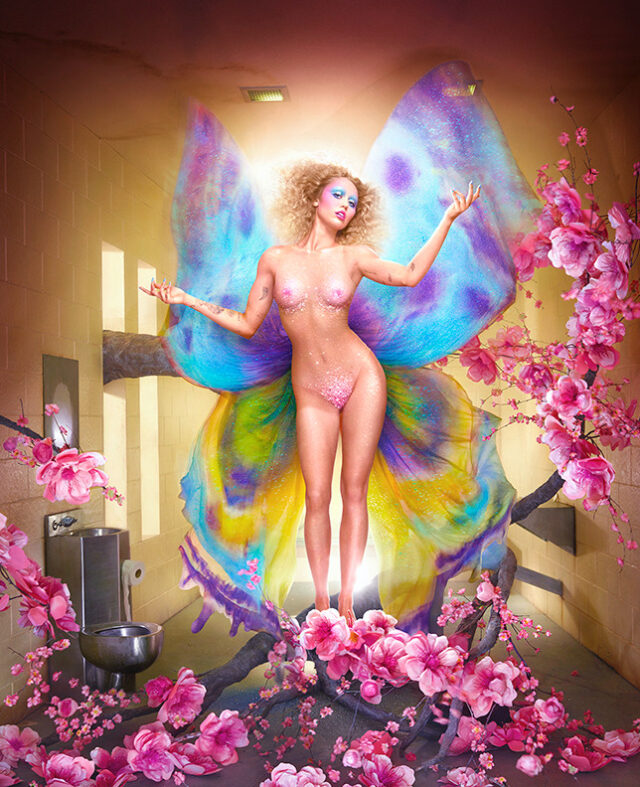 Lost and Found is a 278-page visual recording of the time we live in, and the issues we face, expressed through David LaChapelle’s unique and distinctive vision.

Featuring a monumental curation of images which have never before been published in book form, Lost and Found chronicles LaChapelle’s imagination from editorial photography, and his passionate return to fine art.

This fourth volume also introduces a decade of unseen work from LaChapelle’s creative renaissance, where he offers a bridge into paradise and the sublime, leading viewers into Good News. 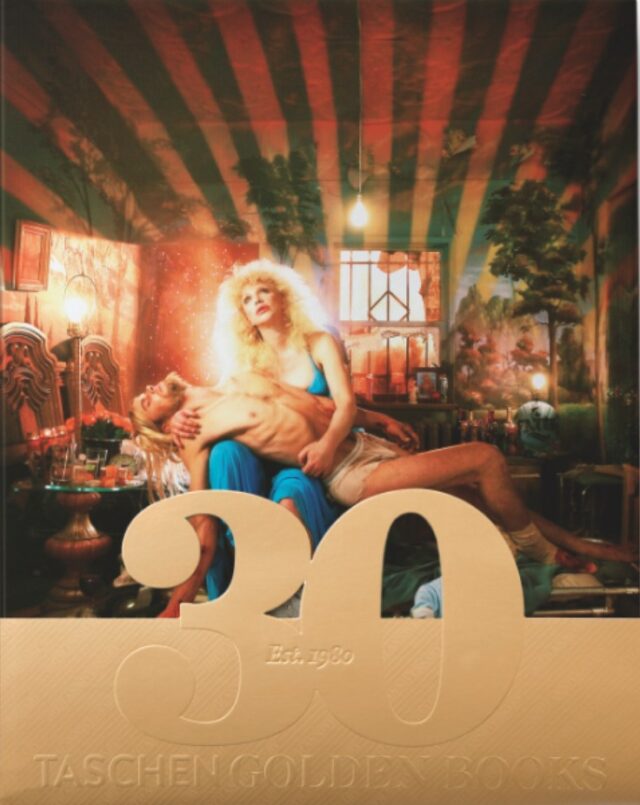 HEAVEN TO HELL: TASCHEN GOLDEN BOOK OF THE YEAR

LaChapelle Heaven to Hell is the third volume in an exhilarating trilogy that began with LaChapelle Land (1996) and continued with the infamous Hotel LaChapelle (1999). Packed with astonishing, color-saturated, and provocative images, those titles both became instant collector’s items and have since gone through multiple printings. Featuring almost twice as many images as its predecessors, LaChapelle Heaven to Hell is an explosive compilation of new work by the visionary photographer. Since the publication of Hotel LaChapelle, the strength of LaChapelle’s work lies in its ability to focus the lens of celebrity and fashion toward more pressing issues of societal concern.

LaChapelle’s images—of the most famous faces on the planet, and marginalized figures like transsexual Amanda Lepore or the cast of his critically acclaimed social documentary Rize—call into question our relationship with gender, glamour, and status. Using his trademark baroque excess, LaChapelle inverts the consumption he appears to celebrate, pointing instead to apocalyptic consequences for humanity itself. While referencing and acknowledging diverse sources such as the Renaissance, art history, cinema, The Bible, pornography, and the new globalized pop culture, LaChapelle has fashioned a deeply personal and epoch-defining visual language that holds up a mirror to our times.

This popular hardcover edition of LaChapelle Heaven to Hell is a must-have for anyone interested in contemporary photography. It is also keenly priced, especially for those who have coveted TASCHEN’s limited edition, LaChapelle, Artists & Prostitutes. 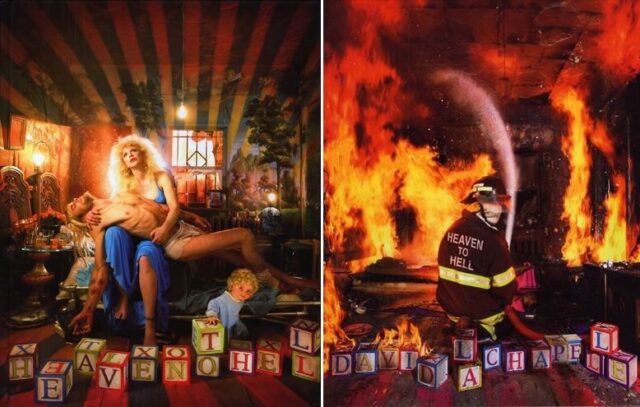 David LaChapelle. Controversial. Explosive. Thought-provoking. Considered the world’s most famous living photographer, he has been breaking all the rules for over twenty years. Heaven to Hell is the last chapter in a trilogy that started with the New York Times bestseller LaChapelle Land (1996), and continued with Hotel LaChapelle (1999), one of the most sought after and collected photography books of all time. Celebrated as the Fellini of Photography, LaChapelle has photographed personalities as diverse as Tupac Shakur, Andy Warhol, Elizabeth Taylor, David Beckham, Lil’ Kim, Hillary Clinton, Philip Johnson, Paris Hilton, Leonardo DiCaprio, Uma Thurman, Muhammad Ali, and Britney Spears, to just name a few. When Referencing and acknowledging such diverse sources as Renaissance art history, cinema, The Bible, pornography, and the new globalized pop culture, LaChapelle has fashioned a deeply personal and epoch-defining visual language that holds a mirror to the face of our times, reflecting back both the sacred and profane. 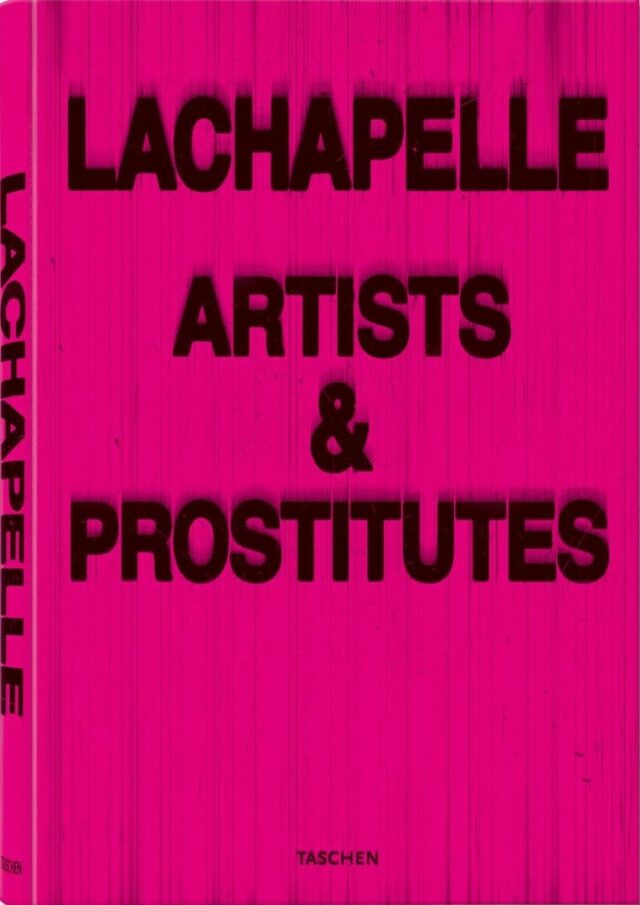 Celebrating the visionary LaChapelle’s truly extraordinary photography, Artists And Prostitutes, a 698-page XL-sized book is packed cover-to-cover with vibrant full-bleed images; the best of his entire career to date. Bursting at the seams with spectacle and drama, and saturated with colors that only LaChapelle can realize, this limited edition pays tribute to the most daring and ambitious photographer in the history of portraiture. Ranked among the top ten -most important people in photography- by American Photo magazine, LaChapelle’s work continues to be inspired by everything from art history to pornography, creating both a record and a mirror of all facets of popular culture. 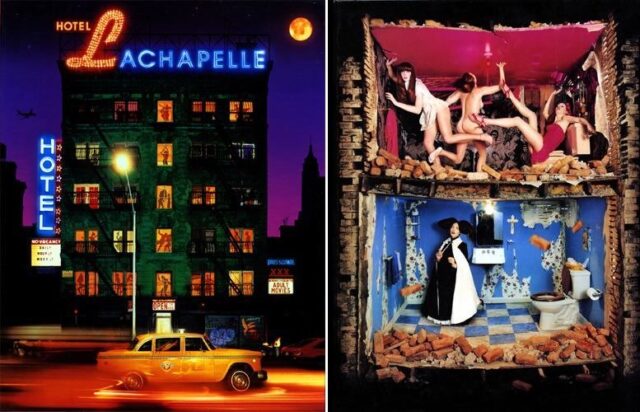 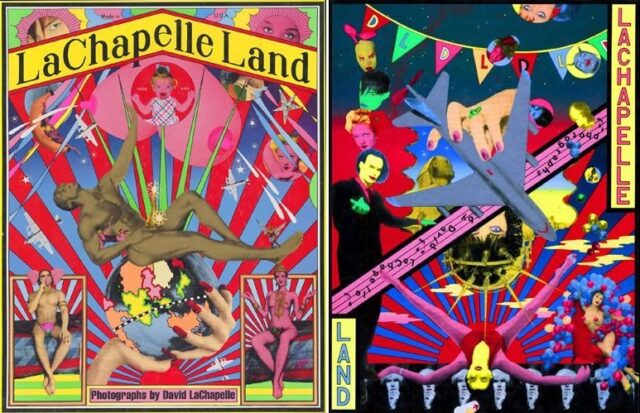