The 2002 multi-channel video installation, HalfLife juxtaposes surveillance video of gamers playing the popular video game Counter-Strike with a live video feed of the game world in which they are playing. The player’s expressions are seen from the cross-hairs’ point-of-view while the their virtual actions inside the game-world unfold in a progressively more violent and graphic video spectacle. A virtual cycle of life unfolds as characters are killed off in the game and disappear from the surveillance channel to be immediately replaced by the next player. The HalfLife installation included a third video channel of actual surveillance footage shot in a cyber-café in Garden Grove, California, where video surveillance systems were implemented by the City Council in 2004 to monitor a sudden increase in gang violence. More 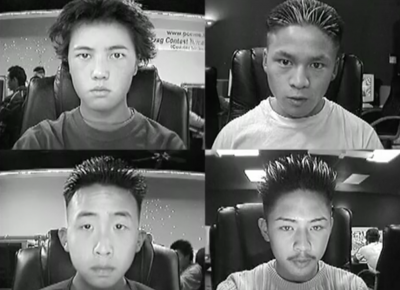