"Tank" is the result of a three-year research collaboration between Kaino and Grand Arts, with assistance from Aquamoon (Chicago), and academic and hobbyist coral husbandry experts throughout the United States. It debuted at Prospect. 3 New Orleans in the fall of 2014, and was presented at Grand Arts from April 17 – June 6, 2015. The centerpiece of the exhibition at Grand Arts was an installation of ten acrylic vitrines, each of which housed a colony of living corals cultivated from fragments and grown for over a year on individual resin casts from a decommissioned US M-60 military tank. A version of "Tank", also produced by Grand Arts, premiered at Prospect.3 New Orleans in fall 2014. "Tank" is inspired in part by Reef-Ex, a U.S. government program in place since the 1990’s, which involves the dumping of outdated military tanks into coastal waters in order to create artificial reefs and fish habitats. Says Kaino: "I saw a poetic contradiction in the notion that some of the smallest organisms in the world were reclaiming the instruments of much larger organisms. Corals are fascinating to me because they are reactionary and survive by responding to need but also to instinct. They have an embedded memory and programming that requires a battle with other corals for territory. Fighting is in their nature, but one would not see this unless they were trained to." Kaino’s delicate living sculptures enact these slow and silent battles for territory through largely invisible chemical warfare. Some of the corals also send out stinging tentacles in a bid to force the retreat of unwelcome neighbors. With "Tank", Kaino brings the history of human conflict and territorialization into relief against the colonizing impulse of an invertebrate species also vulnerable to the effects of the human march toward growth and progress. Special thanks to the teams at Aquamoon: Bryan Schuetze and Bob Van Valkenburg; Biologists: Brian Gauger and Sean Hewitt; Engineers: Brooke Riedel and Doug Bonar, Chicago, IL for their care of the coral animals. Gideon Webster, Los Angeles, CA for his expertise; Aaron Hartmann and Michael Latz at Scripps Birch Research Aquarium/Scripps Institution of Oceanography, San Diego, CA; Natural Resources Defense Council; and Matthew Plumlee, Leawood, KS, for their consultation on the project. More 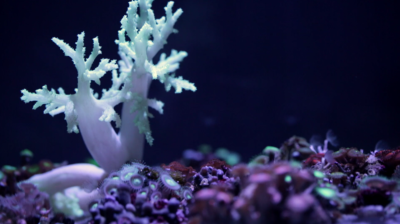