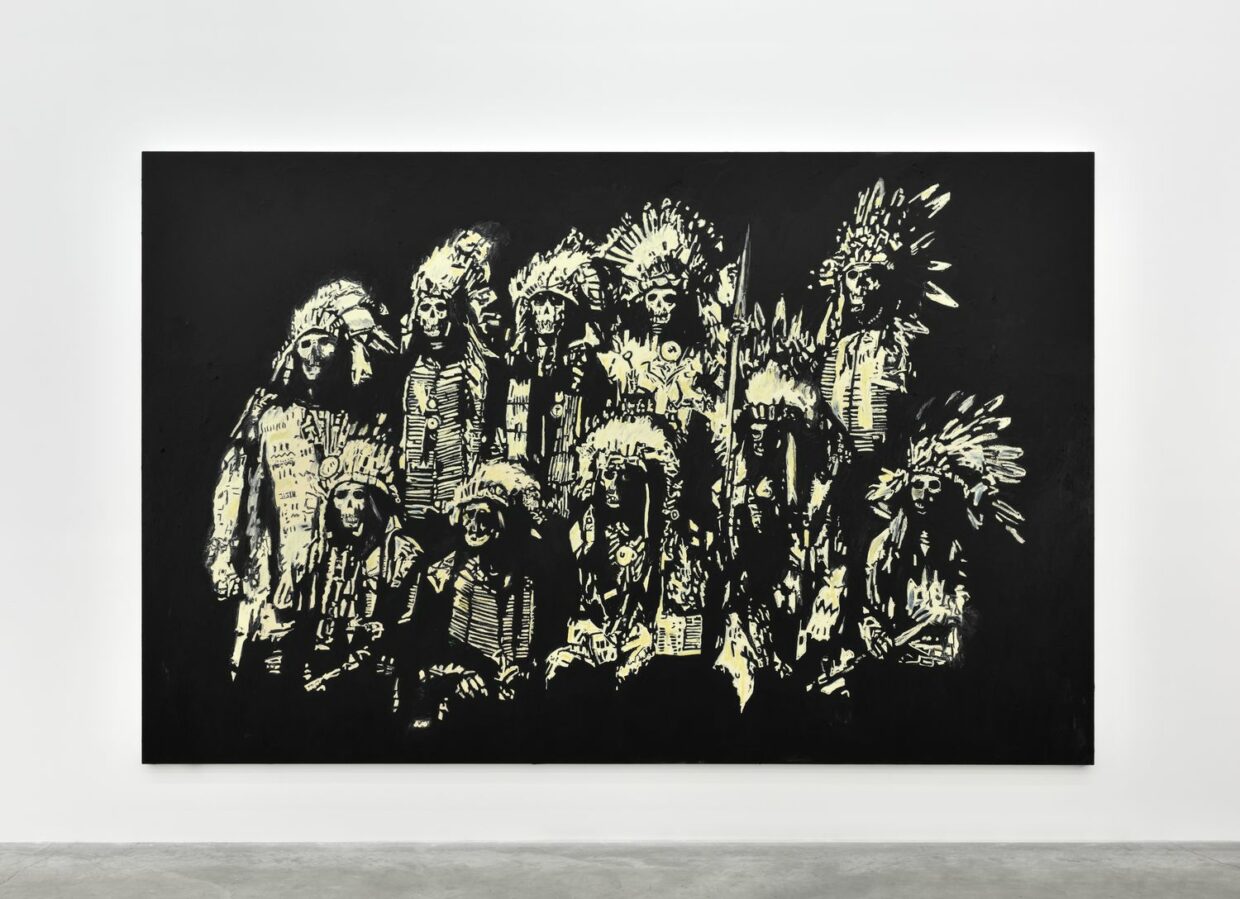 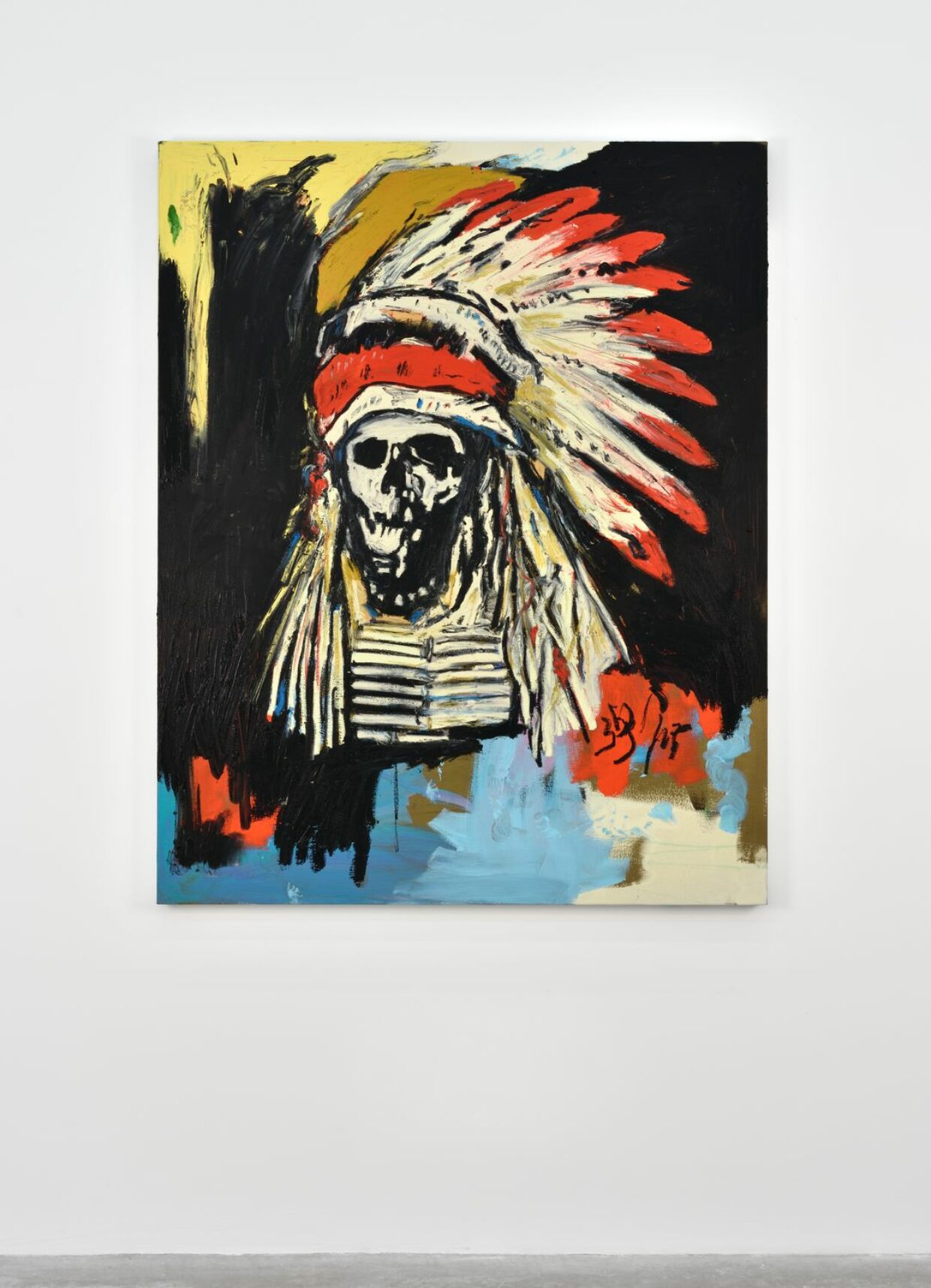 Over the last several decades, artist Wes Lang has been honing his craft involving, amongst other things, a tireless, obsessive mining of a post-pop American landscape. A great many of the artist’s influences are a function of a distinct autobiographical experience with certain exceptions; the indigenous American as well as other totems of the American West, and painters and sculptors from middle of last century such as Twombly, Guston, Kline, Mitchell, Bacon dove-tailing on up to the more contemporary such as Basquiat, Kippenberger, and Mike Kelley. To date, Lang has made his mark primarily on canvas and paper — though his practice extends to include cast bronze sculpture, collage, hotel stationary, fabric, glass and precious metals — and is known for creating surfaces that sizzle; bombastic mélanges often brimming with elegantly rendered, still rough-around-the-edges imagery of grim reapers, Indian chiefs, fallen country music icons, sultry seductresses, long lost folk legends, dead authors, motorcycles, roses and other flora, birds, horses, all of which jockey for prominence within compositions sewn together (and resolved) by cryptic scrawls with a bittersweet vernacular resonate of Ram Dass and the Tao by way of the edge of the universe.

Due to Lang’s feverish, pain-staking process of mark-making which he employs in an on-going quest for meaning — or maybe a simple truth — a canvas is likely to possess several earlier compositions buried underneath its top layer; though elements — either as ghost or left partially exposed — continue to smolder within. It could be said that Lang’s approach is a one brush stroke at a time ritual of revelation, both physical and metaphysical, wherein buried references and themes are brought forth as determined essential. Despite its varied iconography, Lang is forthright that his work, at its heart, exists entirely within the autobiographical; the time-tested objective correlative wherein the artist’s expression is a kind of funhouse mirror of both an internal life and an external quest. Given all that, it certainly does not hurt that Lang’s aesthetic is cool as fuck; yet still manages to mindfully avoid the pitfall of eye candy. Certainly, part of how he achieves this fire walk is by retaining the readily apparent possibility of vulnerability which isn’t always the case with artists who traffic in popular visual colloquiums. Each time Lang addresses a surface he offers up a shard of a deeply personal pilgrimage; a narrative aided at inception by a mother who not only handed the young artist the mystical Rubik’s cube that is the Tao Te Ching but also spearheaded a POV-transforming field trip to The Guggenheim to see the Robert Rauschenberg retrospective.

Lang’s latest offering at Almine Rech Paris marks yet another significant juncture in the artist’s steadily mounting oeuvre. While certainly quite visually cohesive with his earlier work, the new paintings seem to indicate the beginning of the artist’s even more fully realized and self-individuated voice; the artist’s formative inspirations and influences feel much more fully subsumed within the composition which, in turn, leaves much more space for Lang to showcase what he’s clearly always been working towards. In more literary terms, Lang has thoroughly digested his references and is now moving forward with a hard-earned and newly found freedom. According to the artist, his work has traditionally been about the past, the present or some combination of the two. That said, upon the conclusion of a group of paintings immediately prior to this work which exclusively delved into his deepest past, Lang says he feels liberated like never before which, in turn, has smashed open the creative floodgates, enabling the artist to execute entirely within the moment.

The genesis of Lang’s newest body of work was spawned by a single piece executed nearly two years ago which the artist kept mounted on the studio wall until eventually the inspiration and impetus fully revealed itself and became a catalyst for an entire series. The painting in question, “We Worship The Good” is 10’x14’ canvas featuring a mob of Indian Chiefs staring out, every inch of their body language exuding confidence and pride. Once the ice was broken, a grouping of smaller, singular portraits of Chiefs quickly followed. Lang points out that the compositions have a more joyous quality than similarly themed past works of he’s done, more color — the headdress feathers’ tipped in vibrant reds instead of a more signature black — evoking a kind of glowing aliveness which Lang says exemplifies a much appreciated and long-awaited overall sense of well-being in the artist’s personal life. Other larger scale canvases include ritual death and dance masks, buffalo heads, native American vessels — whose emptiness and openness are nods to the philosophy of the Tao — and as always, a smattering of skulls and skeletons; totems pointing to the always fleeting urgency of one’s mission which have been present in compositions from day one. At the same time, there is a quiver of works on paper; many featuring images of Lang’s current companion and muse as well as also a cluster of gem-like, loosely linked canvases.

In the artist’s words, he felt compelled to vary the scale of the works in the show, “from postage stamp to semi-truck and everywhere in between.” Also, certainly worth noting is the artist’s decision, for the first time ever, to execute the entire show in oil. In the past, the lion’s share of Lang’s work was done in acrylic, oftentimes using oil stick, which tended to create flatter more two-dimensional foreground-centric compositions. The exclusive use of oil paint has created a much lusher picture field; renderings of figures and objects seem suspended within the deep black space of the surfaces. Equally significant is the complete absence of text; a defining, core element of Lang’s practice from the get-go.

If “We Worship The Good” functions as the root expression of the show, then certainly “Glory Be…” functions as its centerpiece; a 11’4” x 48’ sprawling canvas, a vast and monumental piece, “Glory Be…” incorporates a potent brew of Lang’s signature elements; though worth noting that the canvas still very much echoes the more minimal, muscularity found in Lang’s newest work.

‘Glory Be is a deeply personal painting reflecting my path in life. It depicts different stages of my journey here on earth – the power of the true acceptance of my mortality, finding real love, being present in each day I have on this planet, and finally ending in the top right corner landscape – the place I plan on living out the rest of my days and also figuratively the empty space and inner peace that I seek to obtain within myself. The scale made it possible for me to show the empty spaces we must create inside ourselves in order to have a full life.’ -Wes