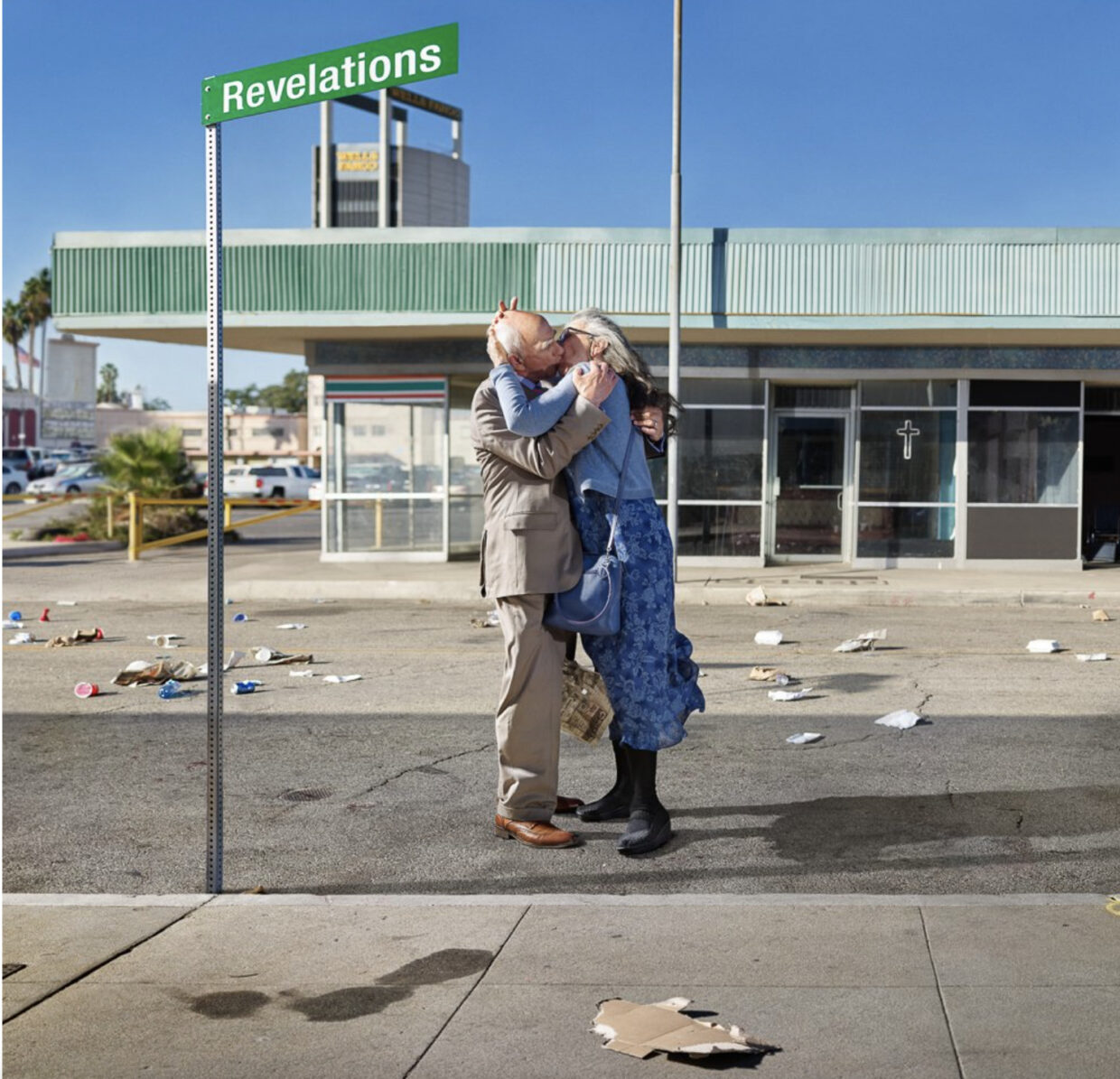 There isn’t a lot these books have in common, but they’re right at home here. Each was hand-picked by photographer David LaChapelle to provide a glimpse into the exhibit “make BELIEVE,” staged in the three floors below. The books do their job well, representing the unique blend of sex, spirituality and consumerism that saturates LaChapelle’s body of work.

The show spans LaChapelle’s career up to this point and marks the first time the museum has devoted its entire exhibition space to one artist.

LaChapelle is a generation-defining photographer for his use of light and color to create otherworldly, surrealist portraits. He’s well-known for his celebrity portraits, including figures like Elton John, Angelina Jolie and Lizzo.

Most importantly, LaChapelle’s work is deeply religious. Apart from carrying deep religious messages and modernizing traditions in religious art, his work contains a genuine empathy for humanity and a concern for its future.

“It’s always amazed me that at one point, most of the artwork being made in the world was religious art,” LaChapelle said in the exhibit’s audio guide. “Almost none of the art being made today is religious art. I just have always felt compelled since I was very young to explore these ideas of heaven and the holy family.”

Two of his large-scale photo projects are based on biblical events.

“Revelations” is based on the book of the Bible that details the end of time. The piece is a still frame from a series of music videos for Daphne Guiness’ album of the same name. In its key frame, a couple embraces in front of a deserted store, trash littering the street where they stand. Other iterations include other figures who are in much more panic.

It was shot in late 2019, months before the beginning of the COVID-19 pandemic, and now contains a kind of prophetic vision. The videos end with a closeup on a news channel and a headline that reads, “Every night on the news now, practically, is like a nature hike through the book of Revelations.”

Large enough to occupy an entire wall is “Deluge,” based on the great flood of Genesis and Michelangelo’s iteration of it in the Sistine Chapel. Set in a submerged Las Vegas (the “City of Sin”), it features a sunken car, collapsing phone lines and a crumbling Caesar’s Palace.

LaChapelle has a fascination with the Pieta, a style of painting or sculpture that features the Virgin Mary holding the dead body of Jesus in her arms. The style originated in Gothic Germany but became a large part of the Italian Renaissance thanks to Michelangelo, one of LaChapelle’s favorite artists.

Celebrities aren’t exempt from these religious inspirations. In “American Jesus,” Michael Jackson is cradled by Jesus in a reversal of the Pieta. In portraits displayed side-by-side in one room, Kim Kardashian poses as Mary Magdalene and Kanye as Jesus wearing a crown of thorns.

LaChapelle is a queer artist, and this largely shapes his photography — particularly in his early career, as he began working in New York at the beginning of the AIDS crisis.

“My earliest works from the 1980s were motivated by a search to represent a loving God, the nature of the soul and heaven during a devastation period when I lost many friends,” he writes in the show’s artist statement.

LaChapelle’s boyfriend of three years died of the disease early on.

“I remember asking God, ‘Why is this happening?’” he said.

Beyond his early work, the most powerful depiction of this blend of homoeroticism and spirituality comes in a small series that centers David and Jonathan in the Old Testament. The show’s key art, “1 Samuel 18:1,” depicts the two in quiet, beautiful intimacy. Theologians and scholars debate whether the two men were lovers or simply represent the truest form of friendship; LaChapelle says he has no definitive answer and would rather the audience interpret their relationship for themselves.

The verse that the painting’s title mentions is one source of the debate: “As soon as he had finished speaking to Saul, the soul of Jonathan was knit to the soul of David, and Jonathan loved him as his own soul.”

Early in his career, LaChapelle met Andy Warhol — an artist he had long admired — and began working for him at Interview magazine. LaChapelle photographed Warhol’s last portrait before his death in 1987. In his collection are reproductions of Warhol’s “Marilyn Monroe” and Liz” using models and using makeup and lighting to recreate a pop-art feel.

Both queer Catholics, Warhol and LaChapelle present similar views of the world. Warhol’s religion is undoubtedly more unsteady; LaChapelle’s is pious even if his lack of purity is enough to cause some conservative Christians to clutch at their pearls. What they share is a view of God that’s both sacred and strange, connected in large part to participating in a religion that often feels unwelcoming to queer people.

In “Addicted to Diamonds,” model Amanda Lepore snorts diamonds as cocaine with a rolled up $500 bill. In “Icarus,” based on the Greek myth, a figure with feathery wings made of crutches lay lifeless on a pile of broken computers. The “Aristocracy” series shows private planes circling in pastel clouds and crashing into each other, signifying an endless search for wealth.

Religion is often missing from these works — because LaChapelle sees Jesus as a figure separate from those worldly luxuries.

He emphasizes this in the unorthodox “Jesus Is My Homeboy” series, which began as a fashion editorial for i-D magazine and depicts Jesus in the center of various scenes of urban life.

“I questioned what the second coming would look like, and this question came to me when I saw someone wearing a ‘Jesus Is My Homeboy’ t-shirt,” Chapelle said in exhibit text. “I realized that Jesus would probably choose his companions and followers among the oppressed and the marginalized, much as he did in his first incarnation.”

In the series, Jesus blesses a beggar outside a market with loaves of Wonder Bread and fish. He intercedes between police officers and the person they’re arresting. A sex worker washes his feet. In LaChapelle’s own “Last Supper,” Jesus sits in a small, dimly lit apartment with disciples who are mostly Black men.

It’s in this series that LaChapelle’s empathy and faith are solidified. It’s particularly impressive because it has the potential to earn the ire of those who are Christians and those who aren’t. When i-D editors asked for a fashion shoot, they didn’t expect one with Jesus at the center. When Christians imagine a modern Jesus, they don’t often imagine him in gritty reality. Regardless, LaChapelle is undeterred.

In 2006, Chapelle moved to a secluded part of Hawaii, and in turn his photography took a turn away from elaborate sets and toward a reverence for the natural world. He photographed the island’s beauty and staged religious tableaus with halos of light.

“I felt I was being guided by something beyond myself,” LaChapelle said, “and I became convinced that faith was absolutely necessary to continue my life and work.”

This led to new mediums: namely, photographs printed on glass and enhanced with bright paint. The center point of these glass prints is “Behold,” a portrait of Jesus with blue skin and a magnificent halo. In the series of glass prints, he depicts angels, demons, saints, martyrs and more.

“I approach my work around faith with sincerity and am delighted when a viewer can connect with my intention,” LaChapelle said.

For those who can connect, this uniquely religious and uniquely human exhibit couldn’t get any better.

Jillian Cheney is a contributing culture writer for Religion Unplugged. She also writes on American Protestantism and evangelical Christianity and was Religion Unplugged’s 2020-21 Poynter-Koch fellow. You can find her on Twitter @_jilliancheney.