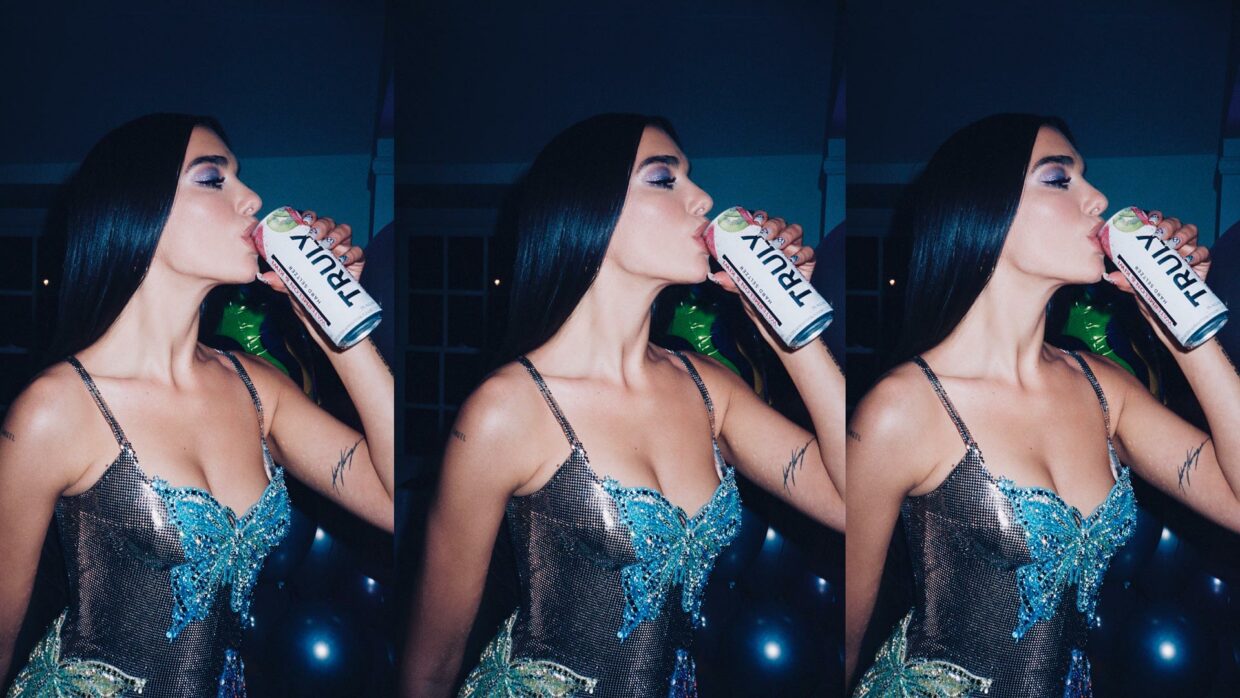 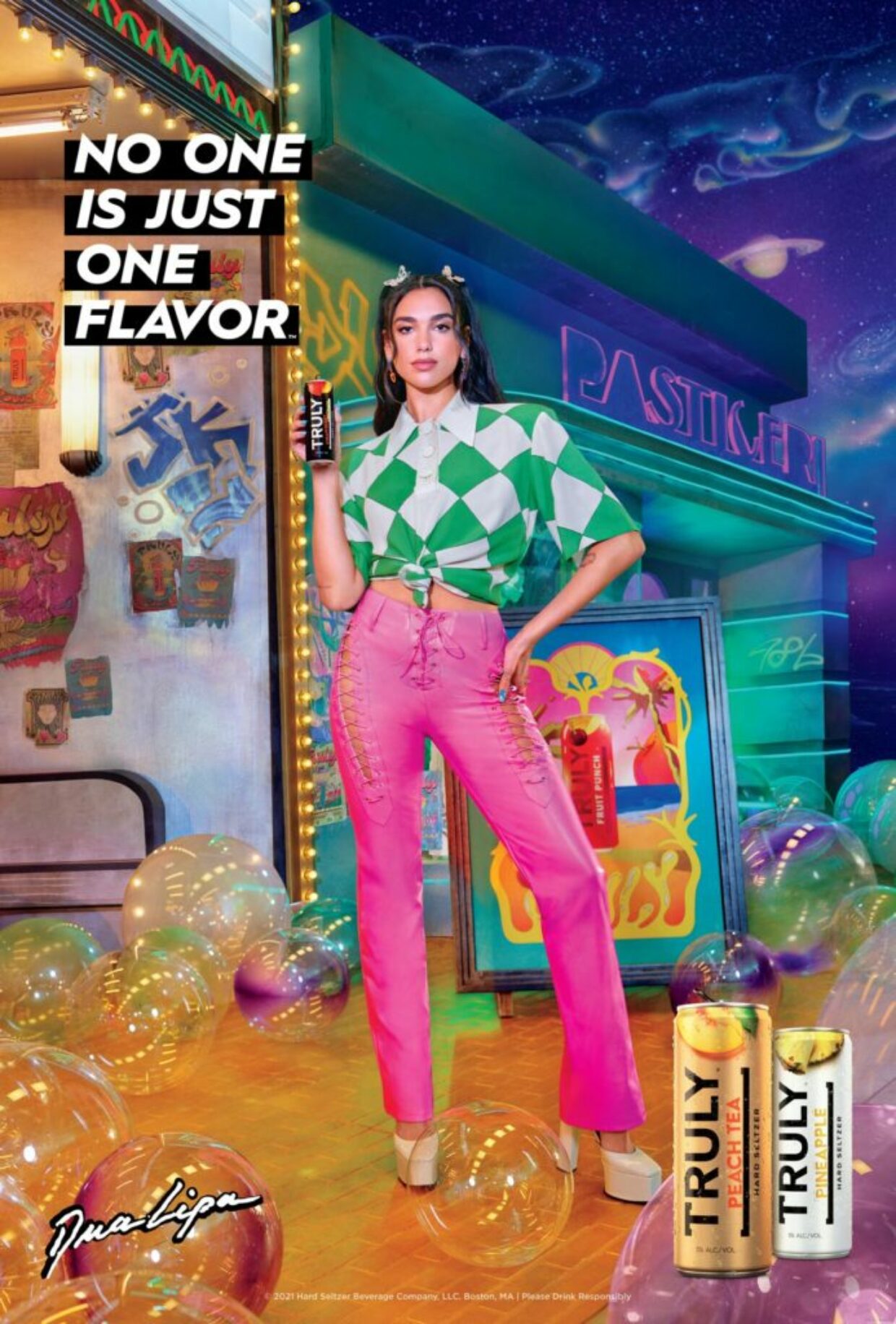 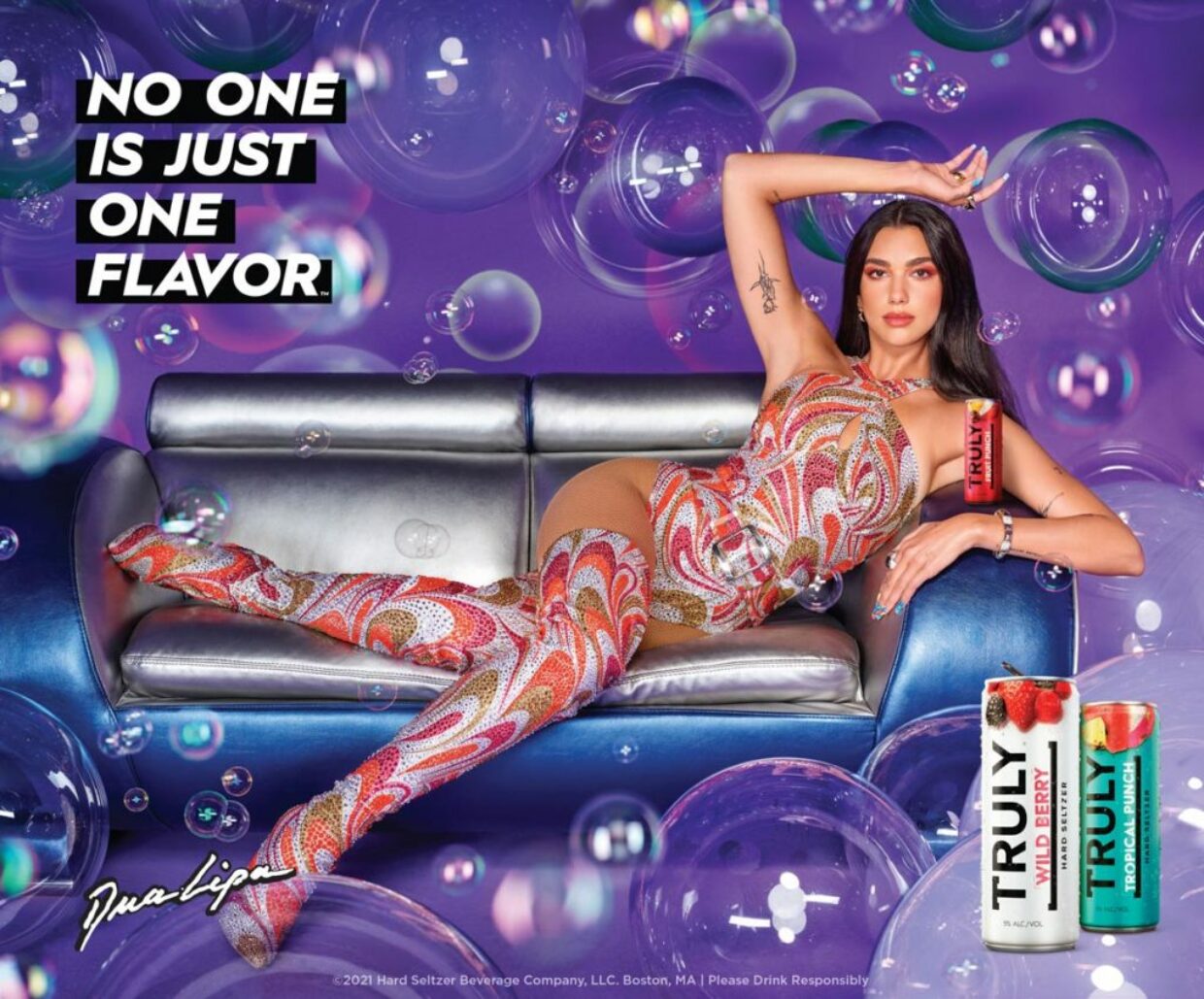 With a new brand campaign that spans just about every possible medium, Truly Hard Seltzer is doubling down on its accepting, fun loving brand—and hoping to continue to close the gap between it and category-leading White Claw.

“No One Is Just One Flavor” launches today with global pop star Dua Lipa at the center. And while it might look like a traditional campaign on the surface, Truly’s aiming to use the brand platform to push past a two-dimensional view of Lipa, highlighting aspects of her life beyond her music career, like the fact that she’s a dog mom, can speak both Albanian and English and loves yoga.

In addition to traditional components on TV, digital and social, the campaign also has out-of-home pieces in New York City and Los Angeles that riff on the “No One Is Just One Flavor” concept. Fragmented outdoor mirror installations in SoHo and Venice, respectively, will offer viewers a multifaceted perspective on themselves. Many interests, moods and talents calls for many flavors and styles of beverage, too, of course—dovetailing with Truly’s commitment to innovation in the flavored malt beverage space.

Truly’s also working with a slate of influencers that will begin posting content on their personal accounts today, which will be incorporated into the brand’s direct messaging in the coming weeks.

Bright spots in the pandemic era

While Truly has seen explosive growth for years now, that only accelerated last summer. As it aims to catch up with White Claw—which recently launched its own summer kickoff campaign—it’s leaning into the reputation it has garnered for inclusivity and innovation. With around a quarter of the overall hard seltzer market, according to data from IRI provided by the brand, it has a whopping 27 different flavors currently available. That includes Truly Iced Tea and Truly Punch, which launched in February and March.

Hard seltzer is also one of the things that served up lightness and fun amid the darker times of the pandemic—similar to Lipa’s Grammy Award-winning 2020 album, Future Nostalgia. That “synergy” is part of what drew the brand and artist together, Don Lane, Truly’s vp of marketing, told Adweek.

“The songs that hit big right when quarantine hit [were] all about being expressive and joyful and colorful and fun despite it all,” he said. “We think that’s a big reason her music really took off last year is because it was a bit of an oasis in a desert of a year.”

Building on an authentic brand connection

For Lipa herself, the connection with Truly is very simple at its core—she just really likes the product. That’s something of a prerequisite for any brand work that she does, she explained.

“I am actually a big fan of Truly,” Lipa told Adweek. “It’s assisted me on many a night out—I actually had it at my Grammys get together with friends afterwards.”
But the brand also resonates. “I also love how inclusive they are,” she said. “When we started speaking about the project and the idea [behind ‘No One Is Just One Flavor’] I thought it was quite a really cool, kind of unique theme, and I wanted to be a part of it.”

“No One Is Just One Flavor” isn’t a one-off partnership, either—it’s the beginning of a two-year partnership between Lipa and Truly, and new components of the campaign will be rolling out all summer long. Working within Truly’s partnership with Live Nation, Lipa will also be participating in a mentorship program for aspiring artists over the next few months with livestreamed concerts and content throughout the summer.

The new campaign spot, created in partnership with Truly’s agency of record, Goodby Silverstein & Partners, was directed by renowned photographer and filmmaker David LaChapelle. It’s set to Lipa’s “Physical (feat. Hwa Sa),” and will make its TV debut on May 22 during Saturday Night Live.

Connecting the spirit of the campaign to the current moment, Lane said he expects it to resonate with fans who’ve been stuck at home for a year during a time that really challenged how we view ourselves and where our priorities lie.
“I think people are ready to go out and let their true selves emerge and just be themselves,” he explained. “Because what else do you have going for you but who you are? We want to be a champion of that.”