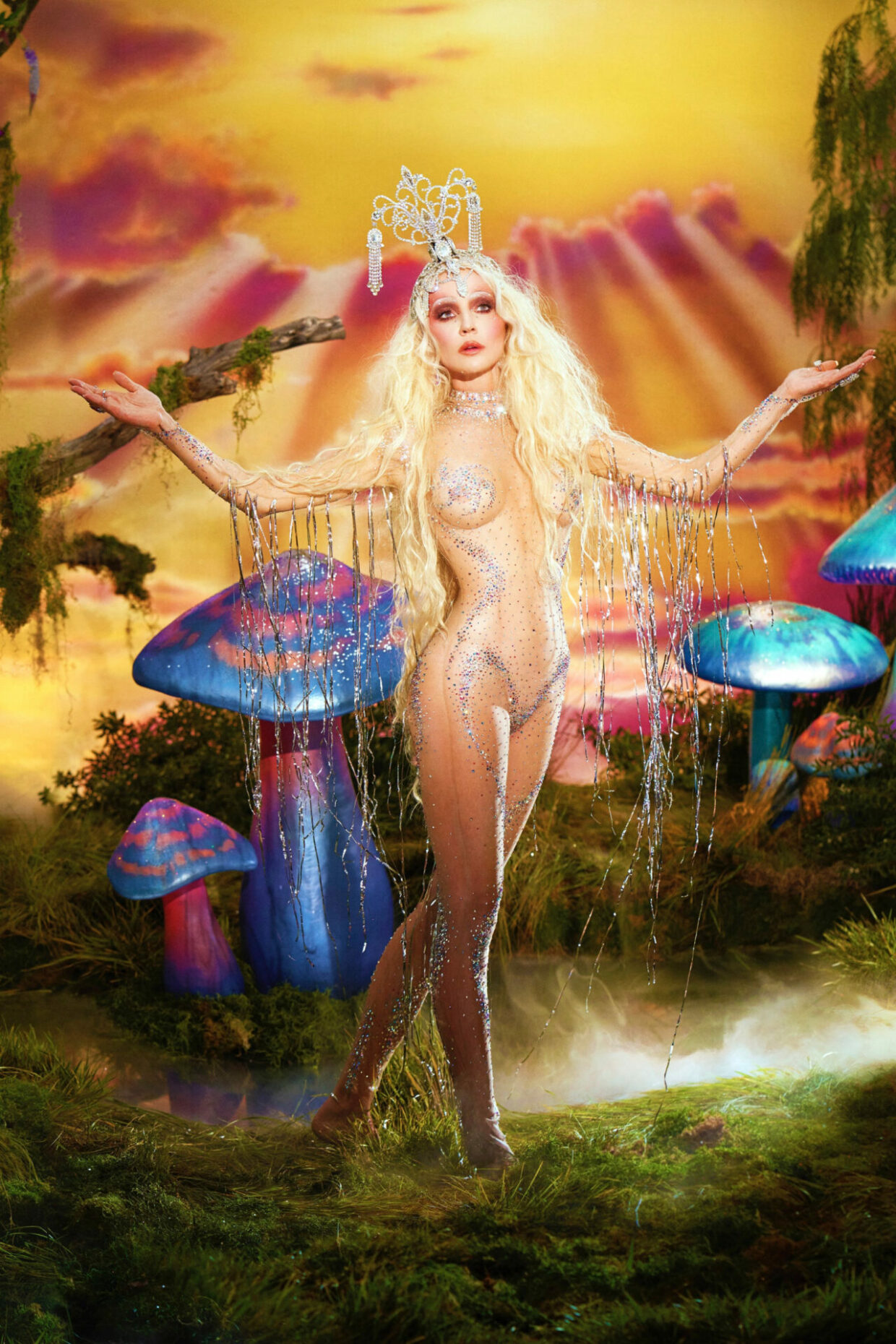 After a chance introduction by the late Isabella Blow at El Coyote—the iconic Los Angeles Mexican restaurant—20 years ago, Daphne Guinness and David LaChapelle have carved out a seismic creative universe together.

Guided by nature, spirituality and an at times fatalistic approach to creativity— the duo’s long-standing personal and creative relationship is signposted by near-mythical turns of events like Daphne quite literally hiding in Elton John’s closet after the duo snuck in after a Chapman Brothers’ exhibition at the White Cube, or LaChapelle “sticking Daphne in a J-Lo video” where she “sipped beer… because she’s a Guinness” he recalls over Zoom affectionately.

During quarantine, the duo dropped ‘Revelations’, a three-part music video (although ‘art film’ feels more accurate), to coincide with the release of Daphne’s single of the same name.

Each directed by LaChapelle, the series of Carlo Dolci-esque portrayals of modern-day American tragedy serve as an accelerated perspective of the apocalypse. Imagine a Caravaggio tableau set in the heart of the Valley – LaChapelle’s inimitable eye is an allegory that is weighted by its accuracy in depicting the world as we see it on TV and on social media.

This year has been so apocalyptic. The ‘Revelations’ videos felt eerily of-the-moment.

Daphne: I wrote the album almost two years ago, and what neither David or I realised was that we were both freaking out about the same things. We started discussing the concept last August and David was having the same thoughts as me, so we shot it in November.

David: Daphne asked me at the beginning of last summer, and I was here in Maui, where we were having a really bad drought. And I got into a really bad depression. I said please give me more time and she was so patient. I was so down and so sad, which isn’t something new to me. I’ve dealt with these environmental themes in everything I do, whether it’s in magazines or pictures or films. Even as far back as Don’t Bungle in The Jungle, which was in ’89. Living in the rainforest, you see these major changes and see trees die off and insects disappear right in your face, which put me into a depression. Daphne let me work it out. I asked if she had a title for the album, and asked if she can call it ‘Revelations’, and she said there was a song on the album with the same name. We’re in synch in that way. We shot on November 17, which was a very auspicious day. That day, someone showed me an article about the first Covid-19 case having been discovered in Wuhan.

‘Heaven’ feels like such an opulent visual departure. Is this a response to the bleakness of reality?

David: I wanted this escapist moment. We needed that opulence and something that told a story. I love stories. It’s also this idea of heaven falling apart. Just like the world, we age and decay too. All things must pass. There’s this element of ‘Sunset Boulevard’ in there too. It’s camp and it’s touching, even though our cynicism today means that we expect heads to roll across the floor or something crazy to happen.

How important is fashion in the narrative?

Daphne: I’ve been recording for so many years now that I’ve gotten stuck in my uniform, so it’s nice to let a stylist bring something new into my world. It’s nice to talk to other people about it as I’ve got so much stuff that I can’t see the wood from the trees sometimes, and I’m concentrating so much on the lyrics and the music.

David: Daphne and Brett the stylist have such a great relationship. He knew the storyline and he’s not just a fashion stylist, he does costume design as well. I’m always trying to get her out of her clothes [both laugh].

Daphne: We’ve had so many great times on set.

Daphne: It’s also our response to vulgarity. I find everything can be so hard and unromantic today. It’s nice to see something that has a little more depth.

David, how do you address those themes in your work?

David: In the context of love, it’s beautiful. I love sexuality and I love the human form but it’s all about the context. In this video, they’re clearly in love and it’s not dirty or exploitative in any way. It’s like when u see Romeo and Juliet, and he climbs into bed with her and you see them naked for a second, and it’s so innocent and beautiful, and it’s the greatest love story ever told. I shoot a lot of figurative work, and in a small way I’m trying to show nude photography that’s not pornographic as we’re so used to seeing the nude body on the internet, and it’s so associated with sex or selling something. You know, starting out with Lil Kim, we had fun and there was always lightness to it and humour, and it wasn’t shadowy. Sometimes things can get dark, and there’s enough darkness out there so I want to be a reply to that.

In the current climate, how important is creativity and beauty?

David: Oh my gosh, it’s very important. Beauty is very important. Nature is the most beautiful thing on the planet and god is the greatest artist. No artist can make a tree. They’re burning down in California and in the Amazon. Beauty is vanishing on the planet, and we’re going to be left with dry wall apartment complexes. It’s so important for humans to rest their eyes on a pastoral scene, like a Turner painting, because being in nature alleviates anxiety.