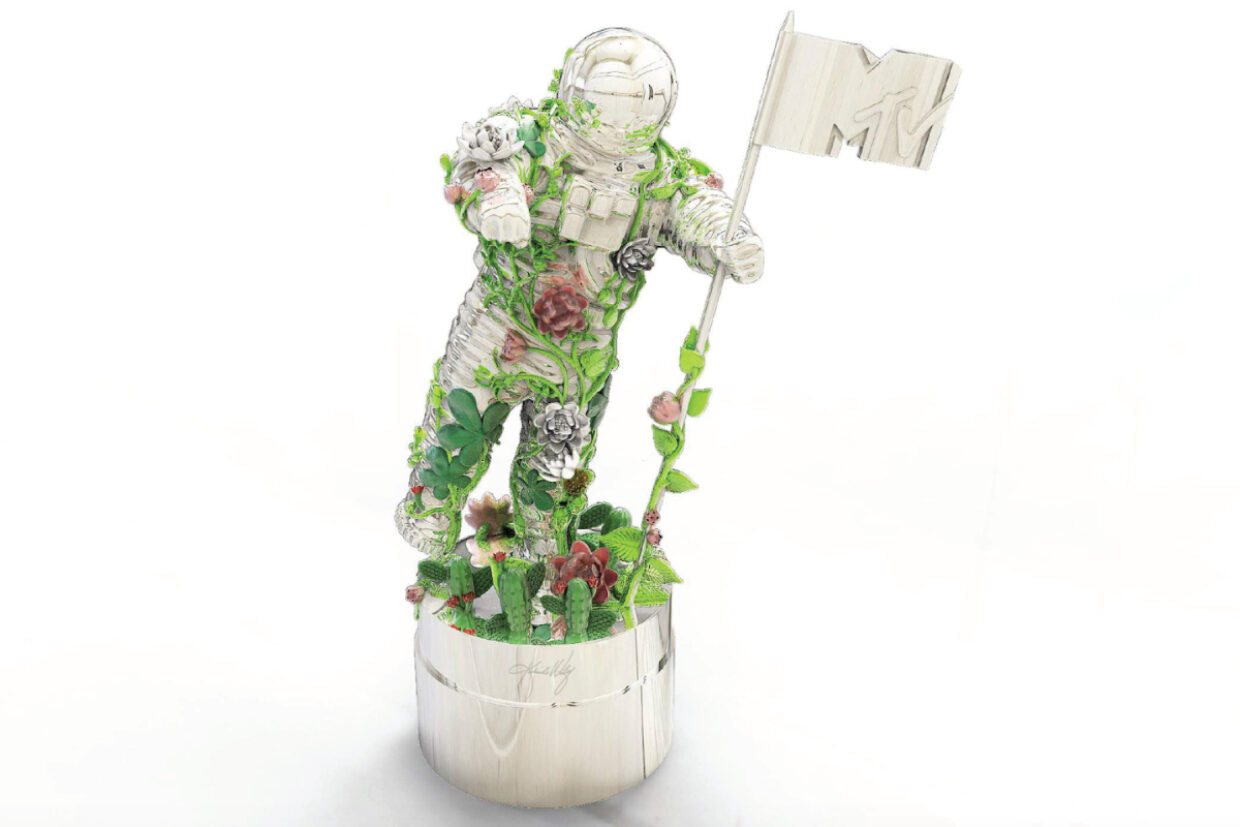 As part of MTV’s ongoing celebration of their 40th anniversary, the network has revealed its new-look Moon Person trophy.

Artist Kehinde Wiley — whose presidential portrait of Barack Obama resides in the Smithsonian’s National Portrait Gallery — is the creator of this iconic statuette that the winners will receive at this year’s MTV Video Music Awards.

Ahead of the September 12th award show, Rolling Stone has the exclusive first look at the new Moon Person trophy:

“Kehinde Wiley’s Moon Person sculpture represents inclusivity and diversity marked by the historical, environmental and nature relevance of the botanicals,” MTV said of the design.

“The design features botanical vines seamlessly flowing up and around the figure’s legs, body, and arms as a commentary on the ethnic histories that surround America. Each intertwined vine or leaf has a different historical relevance, such as the seeds from African slaves, that are woven into the American tapestry. The sculpture complements Wiley’s forthcoming series of portraits, in which he plans to create paintings featuring his subjects lying on their sides as vines encircle their bodies.”

Wiley is the third artist to put a spin on the Moon Person — as its been dubbed in recent years to remove “the implication of gender from its name, and signaling a cultural shift in support of equality and representation,” MTV said — following KAWS’ version in 2013 and fashion designer Jeremy Scott’s take in 2015.

MTV premiered on this date 40 years ago — at 12:01 a.m. on August 1st, 1981 — with footage of NASA’S Apollo 11 mission. As a nod to that historic first broadcast, a full-sized version inspired by Wiley’s Moon Person sculpture will display starting at noon E.S.T. Sunday at the Kennedy Space Center’s Rocket Garden.

“For the past 40 years, the pioneering spirit of space exploration has inspired MTV to break boundaries in culture and, as such, has encouraged generations to rethink what is possible,” MTV said. “Now, MTV is celebrating its 40th anniversary with new beginnings at Kennedy Space Center Visitor Complex. Following its debut, the large-scale MTV Moon Person will be on display to guests at NASA Central at Kennedy Space Center Visitor Complex.”