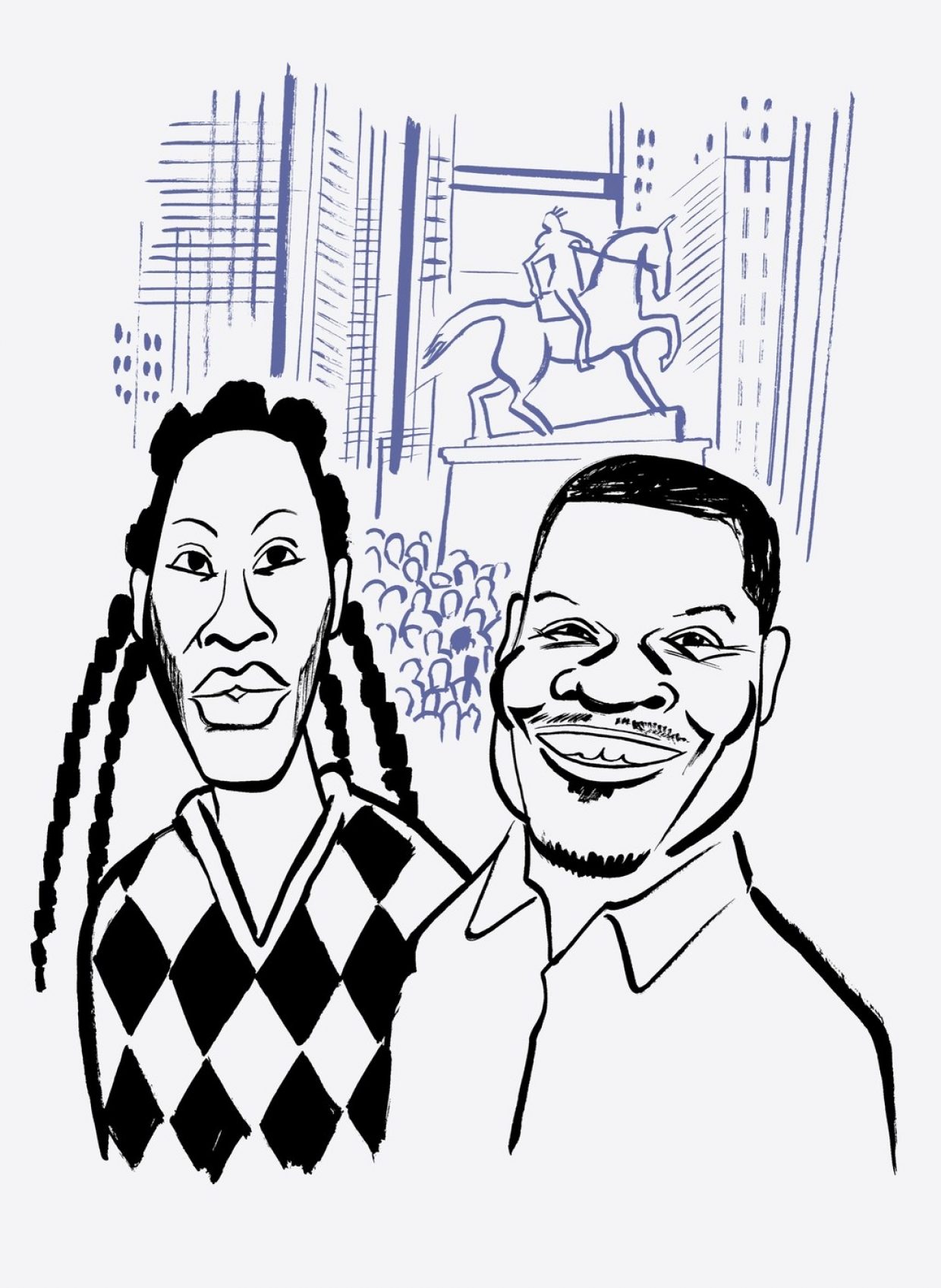 Kehinde Wiley and Jeremy O. Harris’s Meeting of the Minds

One rainy night in midtown, the playwright Jeremy O. Harris and the artist Kehinde Wiley took refuge in a covered alley next to the Golden Theatre, where Harris is making his Broadway début, with “Slave Play.” Around the corner stood “Rumors of War,” Wiley’s twenty-eight-foot-tall statue, which sends up Confederate monuments by placing a black man in a hoodie and jeans atop a rearing horse. Wiley’s postmodern take on Civil War iconography chimes with “Slave Play,” in which a series of antebellum sex scenes is revealed to be a spin on contemporary kink. Harris and Wiley had other things in common: both received M.F.A.s from Yale (Wiley in 2001, Harris this past spring), and both were making provocative incursions into Times Square, land of Coke ads and Elmos.

Harris and Wiley had met in passing, and Wiley attended the opening night of “Slave Play,” but they were overdue for a meeting of the minds. As patrons filed into “Slave Play” and tourists ate hot dogs beneath “Rumors of War,” the two sat on a bench. Harris (thirty, brash) wore sherbet-colored sneakers and a Gucci sweater that he’d picked up at Milan Fashion Week. Wiley (forty-two, sagelike) wore ripped jeans and an oxford shirt. He would soon leave for Senegal, where he runs an artists’ residency. “I’m dividing my time between New York and West Africa, and Africa’s winning,” he told Harris.

“We’ve got to fix that,” Wiley said. “You’re coming with me.” Wiley grew up in Los Angeles, but his father lived in Nigeria. “When I was twenty years old, I got on a plane to find my father,” he recalled. “He disappeared shortly before my twin brother and I were born. Africa has been this constant, mysterious presence.”

Many of Wiley’s paintings, including his official Presidential portrait of Barack Obama, pair traditional Western portraiture with explosive floral backdrops. “When I look at your paintings,” Harris told him, “there seems to be this, like, not reframing or reimagining but undoing of history, and planting a new one inside of it. And the patterns are so African.”

“So much of the patterning comes from the marketplaces of Africa,” Wiley said. He mentioned the mirror that hangs from the set of “Slave Play,” reflecting the audience. “Mirroring is something that so many creative people do, this idea of shadow dancing—we’re touching the exterior world, but ultimately we’re defining the contours of our own interiority.” Wiley added that he’d found the second act of “Slave Play” particularly trenchant. “There’s this urge with so much of the hard work that needs to be done with race in this country to shuffle past all of the uncomfortable bits.”

Harris nodded. “Some people compartmentalize discomfort or don’t lean into it,” he said. “The one time I did move away from my discomfort, I really regretted it. I’m a music freak, and I was very talented at playing piano from age five to eight. But I switched teachers, because the teacher was teaching me how to play by ear. Then I had this older white lady, and she wanted to teach me notes. And she was mean. When it got too much for me—the pressure of having to be good—I quit.”