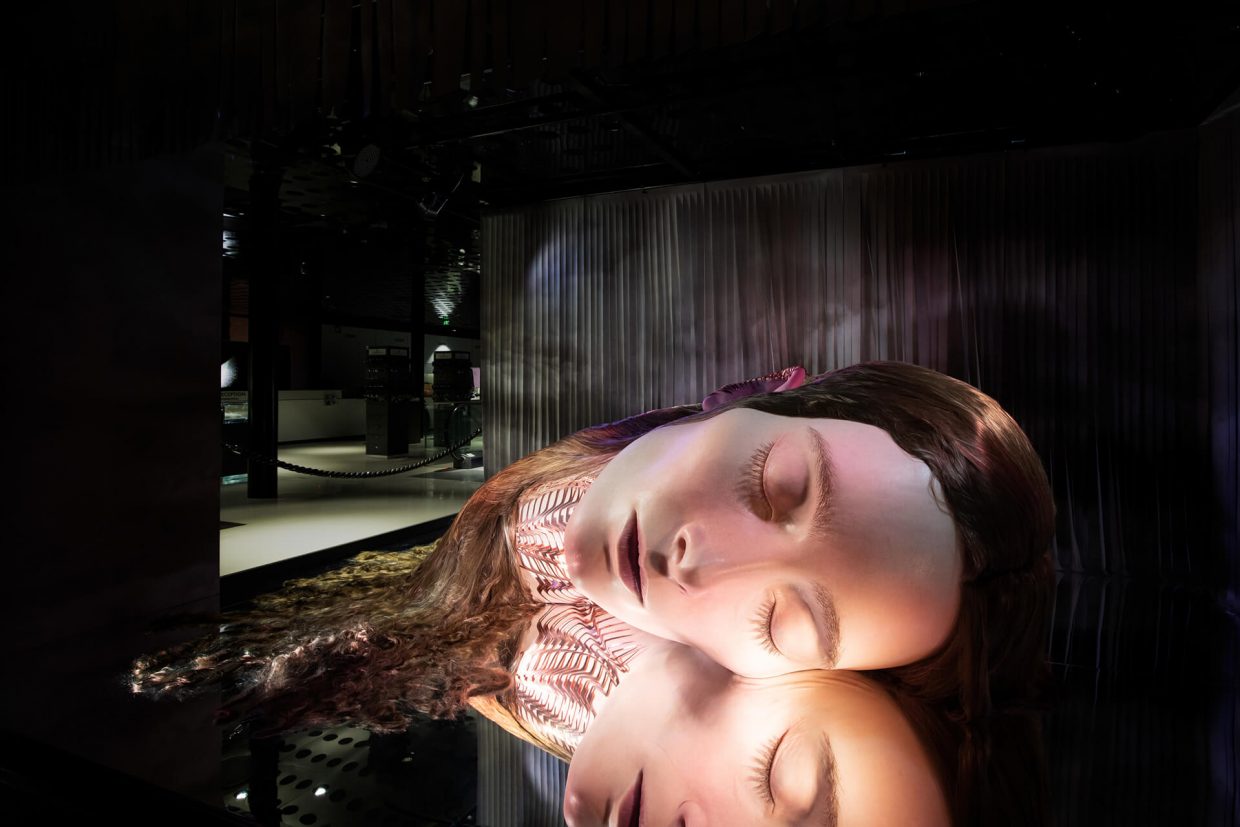 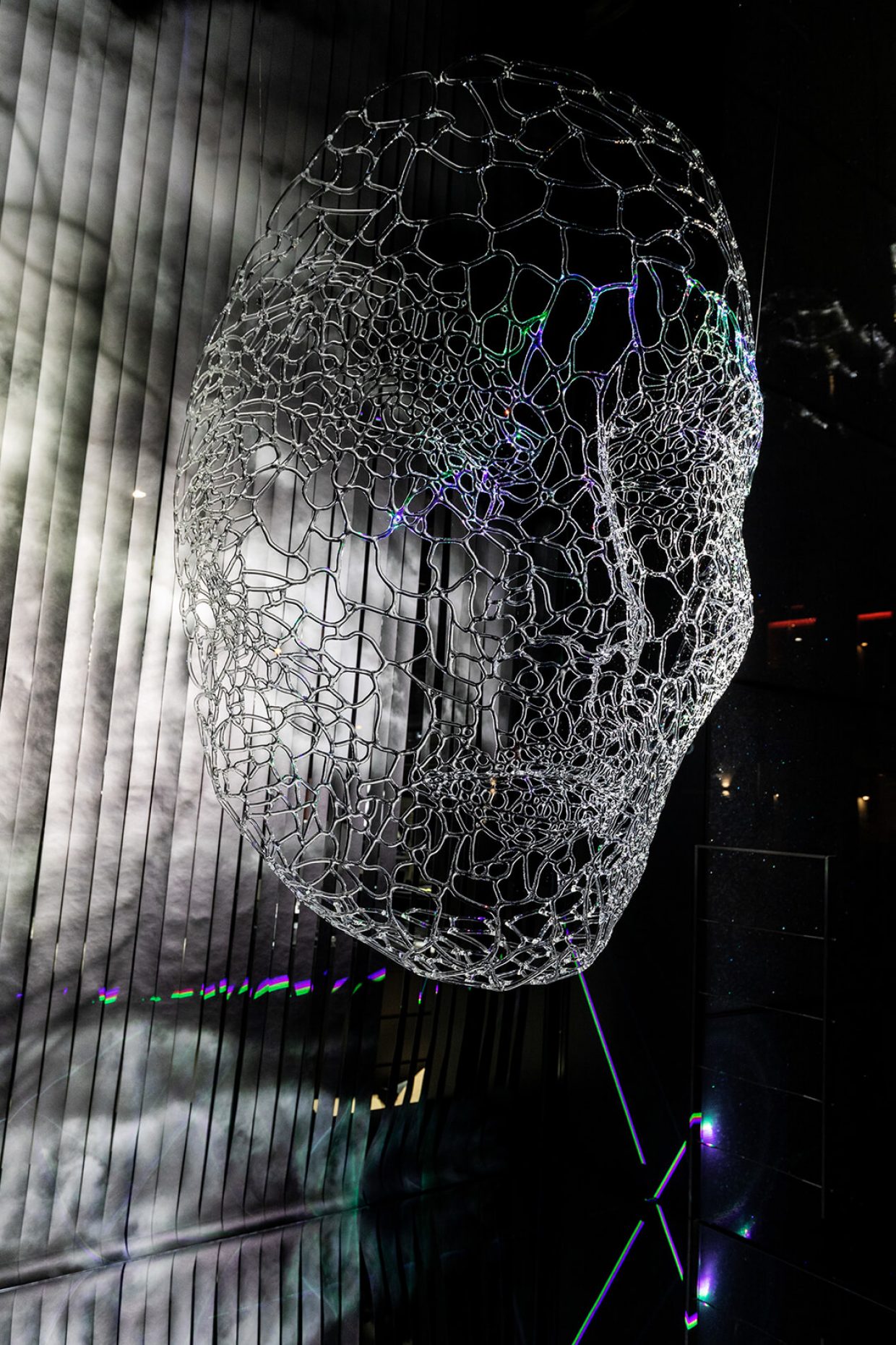 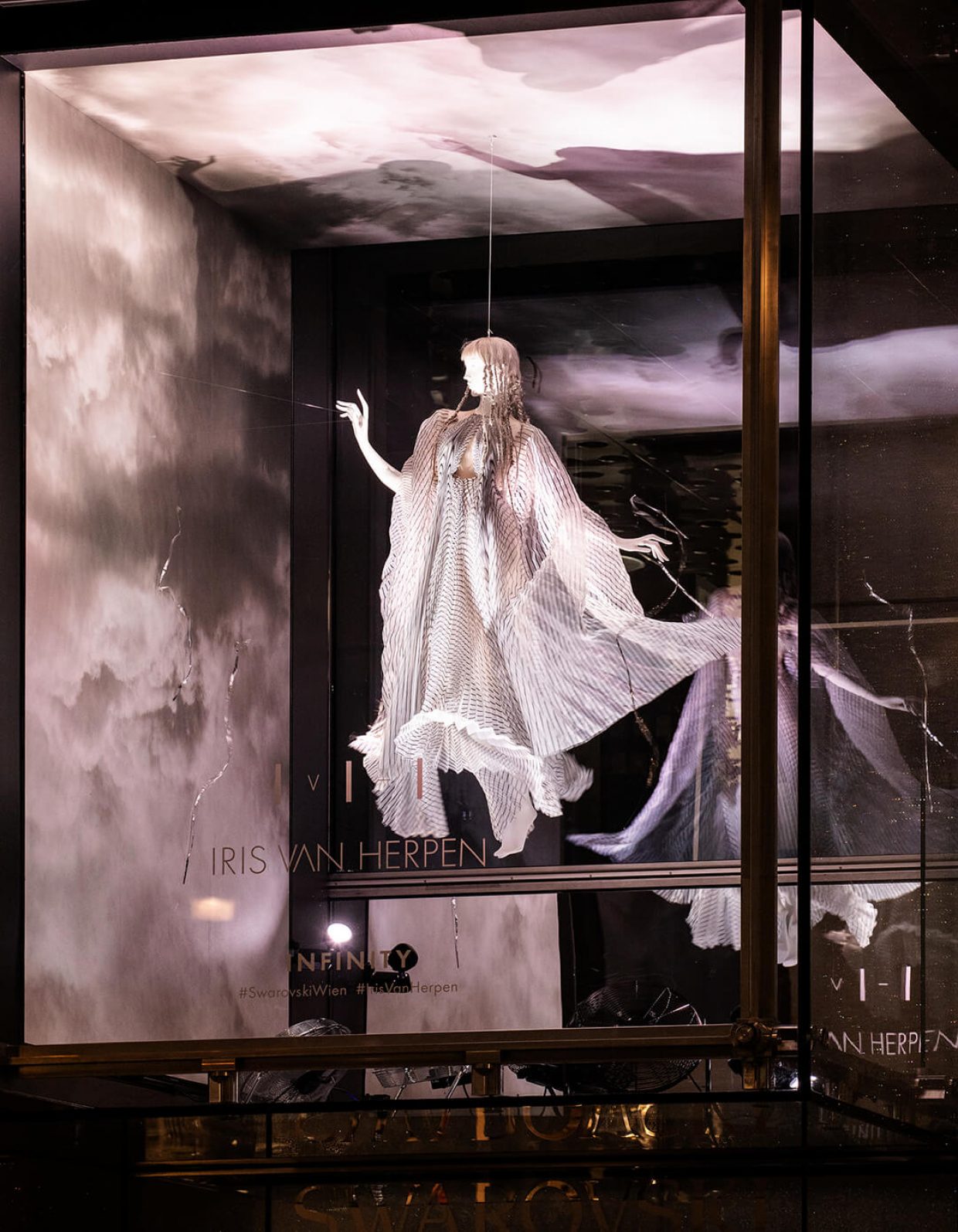 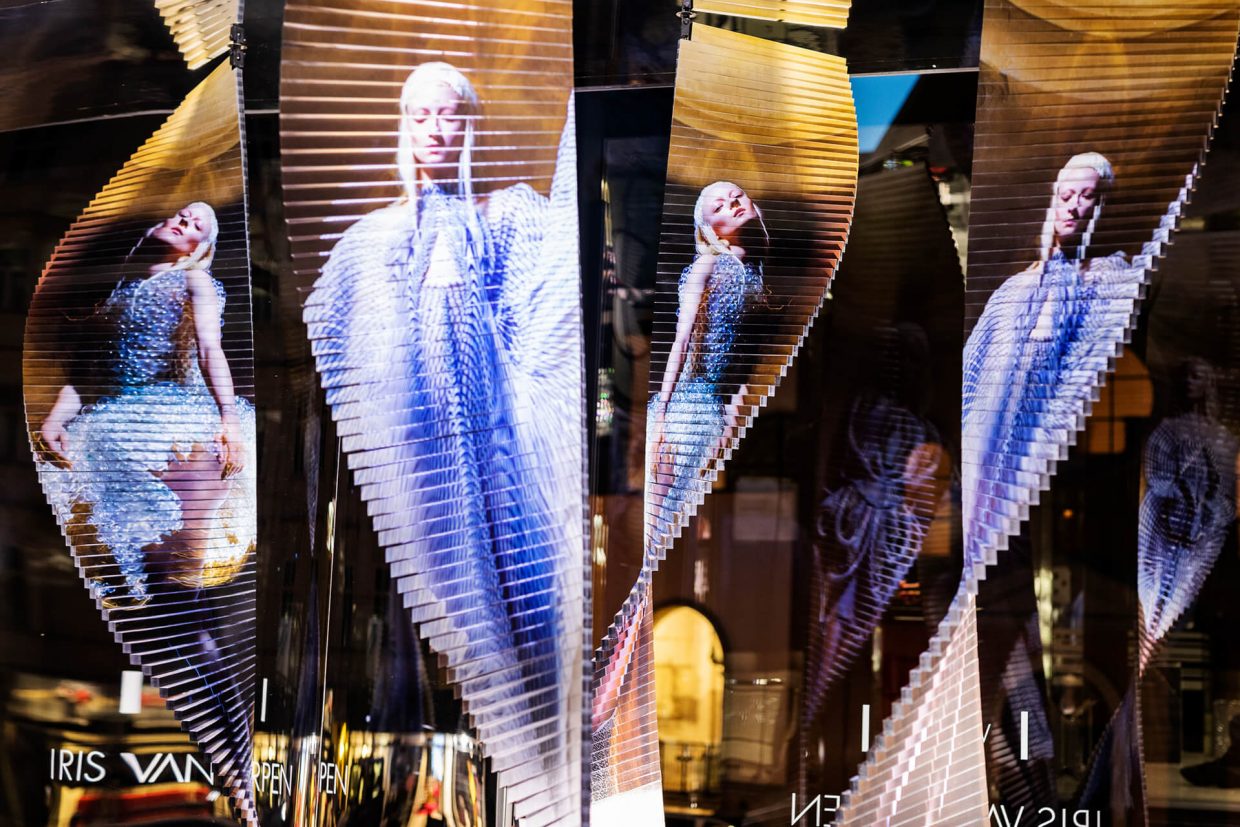 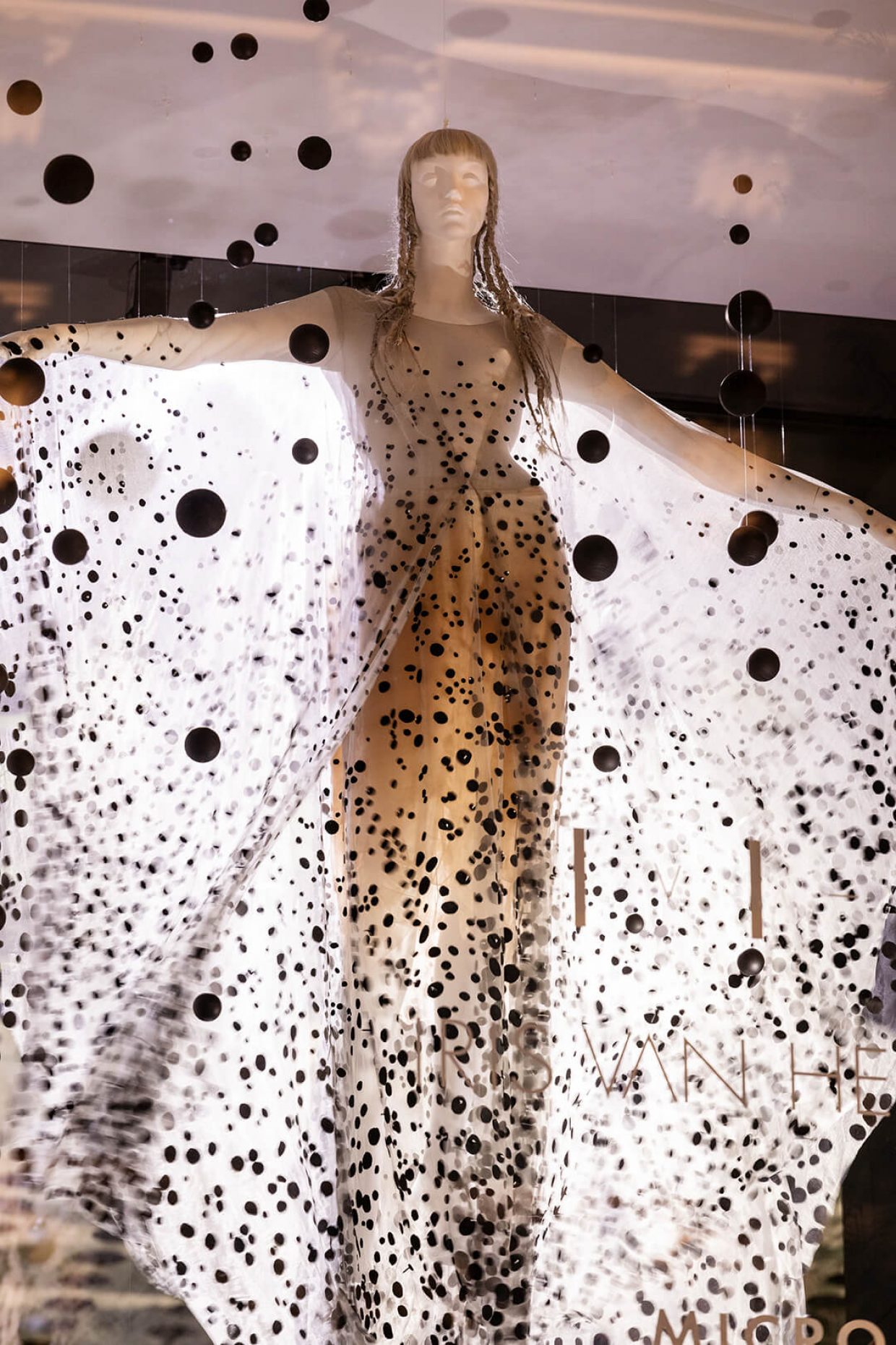 VIENNA – Visitors to Vienna’s Kärntner Straße may be taken aback by the larger-than-life, seemingly breathing and dreaming female head positioned front-and-centre outside the Swarovski Kristallwelten store. Such hyperrealistic art depicting the human form – in its attempt to exist within a hair of reality – becomes surreal. Take, for example, the disconcerting, technically unbelievable sculptures of Ron Mueck or the eeriness of Gucci models holding their own 3D-printed heads down the runway. Activating an ilk sense of bended perception is something that fashion designer Iris van Herpen aspired to with the realization of five installations for the Swarovski store, which is celebrating its tenth birthday this year.

The Swarovski Kristallwelten store in Vienna is one of three in Austria in operation with the aim of fusing art and lifestyle to ‘transform [Swarovski] crystal into a living experience.’ Van Herpen’s work for the company gets straight to this point: Biomorphism – the body of installations created for the store – is the designer’s ode to the performance of femininity.

With this, one can perhaps recall back to gender studies classes of yesteryear: in her seminal 1949 book The Second Sex, Simone de Beauvoir wrote, ‘One is not born, but rather becomes, a woman.’ Biomorphism expresses the processes of such a transformation through its thematic focus on movement and form.

Meant to evoke the fuzziness between reality and unreality experienced in the subconscious during lucid dreaming, the aforementioned glass sculpture by Valter Adam Casotto is fashioned after the real head of Dutch model Iekeliene Stange. It inhabits one of the five cubed vitrine spaces envisioned by van Herpen and set designer Rhea Thierstein.

Contrasting the hyperreality of Casotto’s work, a glass sculpture outlining the contours of a woman’s face by the Austrian artist Bernd Weinmayer turns instead to the interpretive, casting enigmatic shadows in all directions of a second cube. In a third, a haunting white moiré dress designed by van Herpen – called Infinity – billows, playing with light to cause a spectrum of patterned illusions for the viewer. Made of tulle, thousands of hand-stitched leather circles, white pearl filigree and Swarovski 3D studs, the Aeriform dress poses a visually kinetic explosion in the fourth.

Developed in collaboration with artists Warren du Preez and Nick Thornton Jones, Cymatic – Biomorphism’s final installation – presents image sculptures depicting geometric visualizations of sound waves. Referring to her background in classical ballet, van Herpen explained what Cymatic represents in the transformation process. ‘Sometimes a garment is perfectly in tune with the body and the two dance together,’ she said. ‘Sometimes it is exactly the opposite, and the garment determines how the body moves. It is this disruption, this intuition that I wanted to focus on in this installation.’

Two transformations – thanks to van Herpen’s metaphysical rousing – are set in place with Biomorphism: a visitor’s perception of the brand’s reach and that so-often misunderstood thing we call femininity.