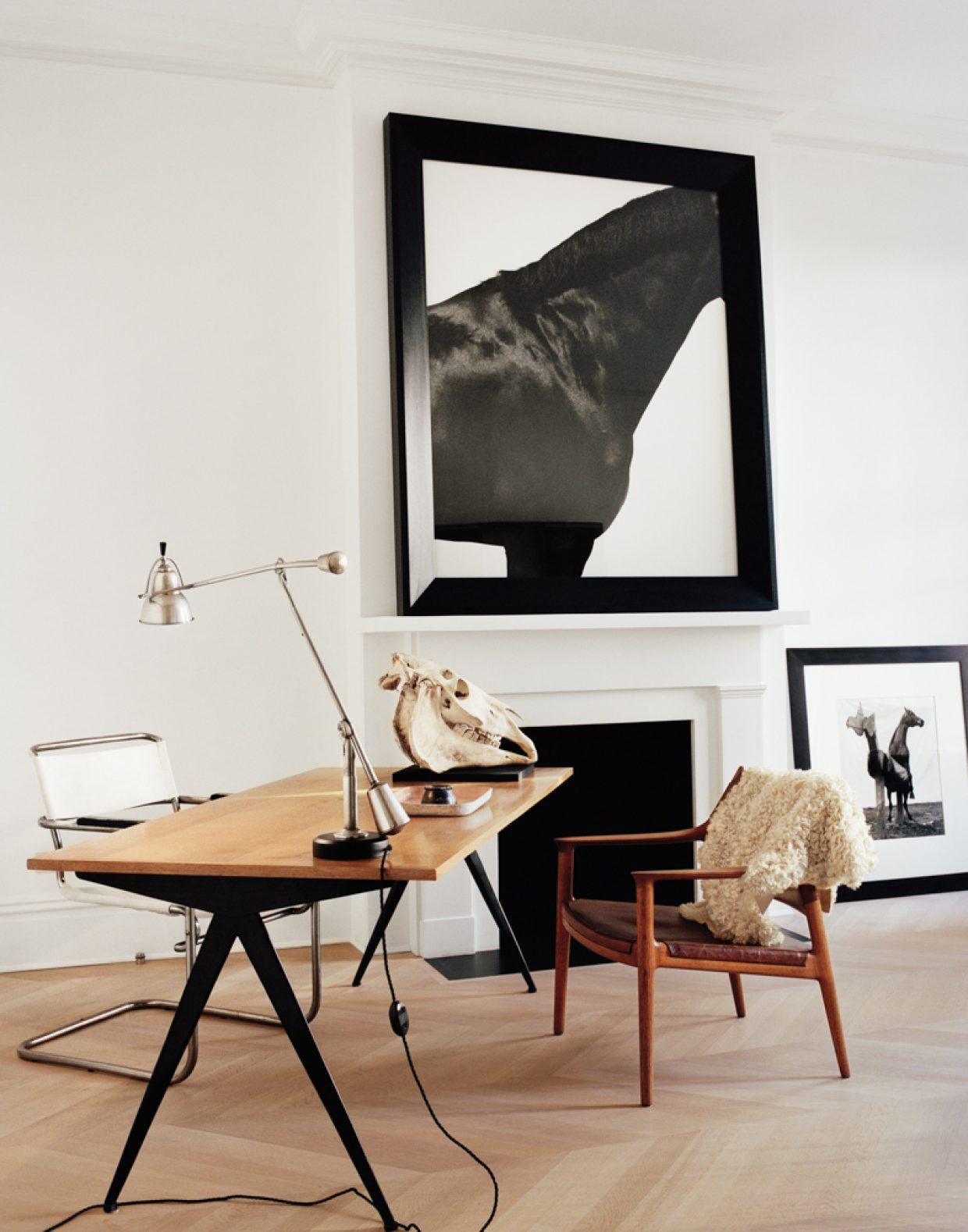 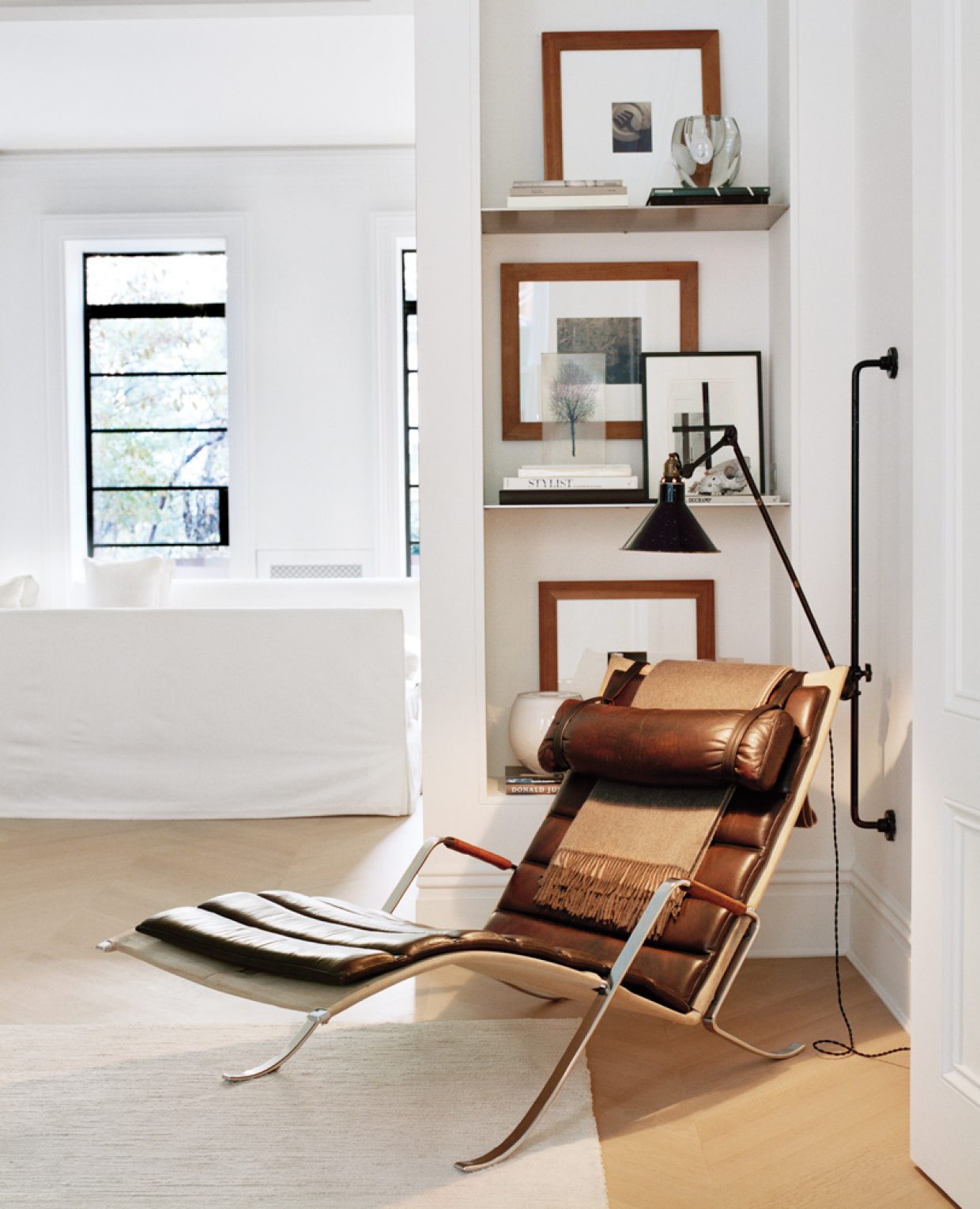 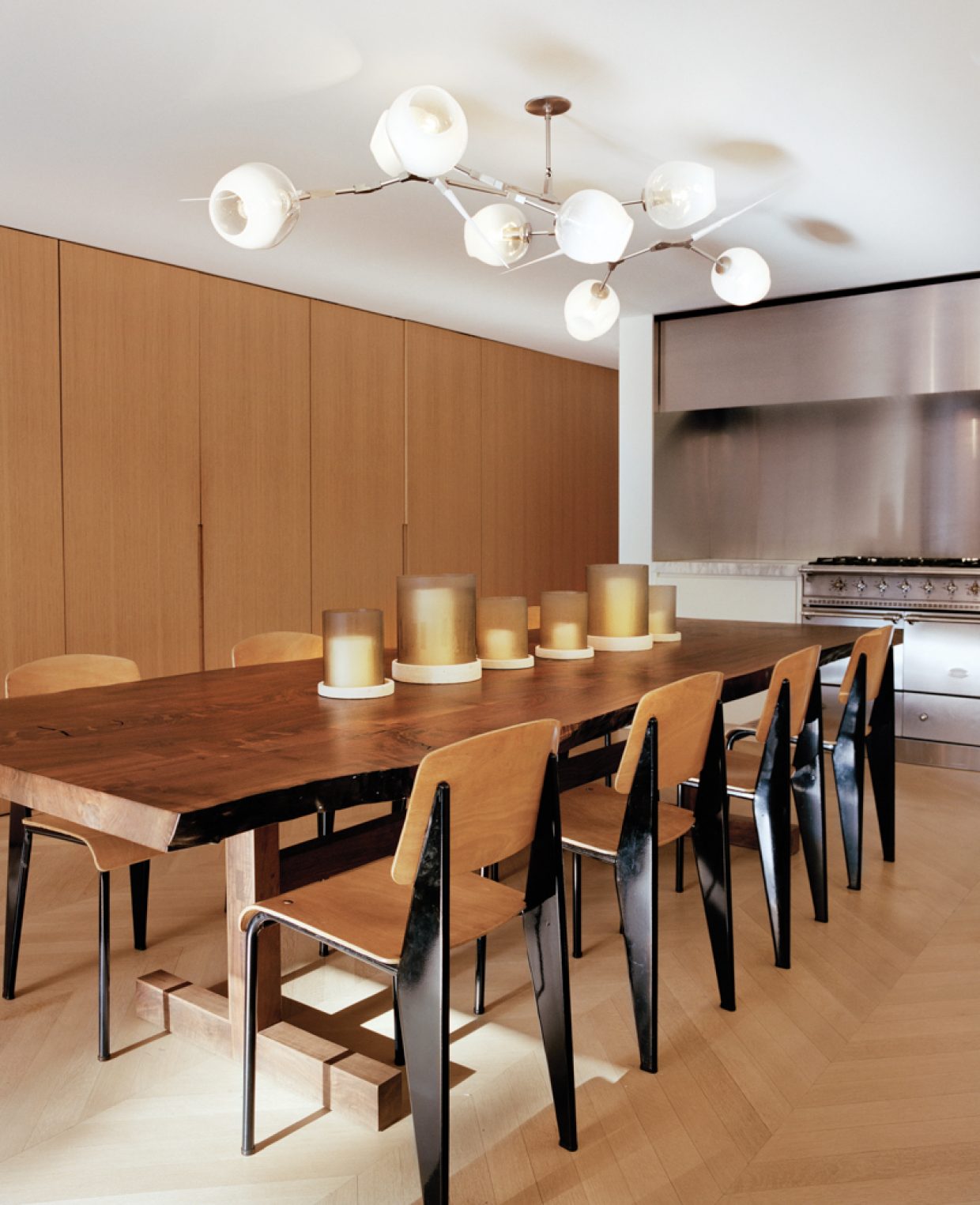 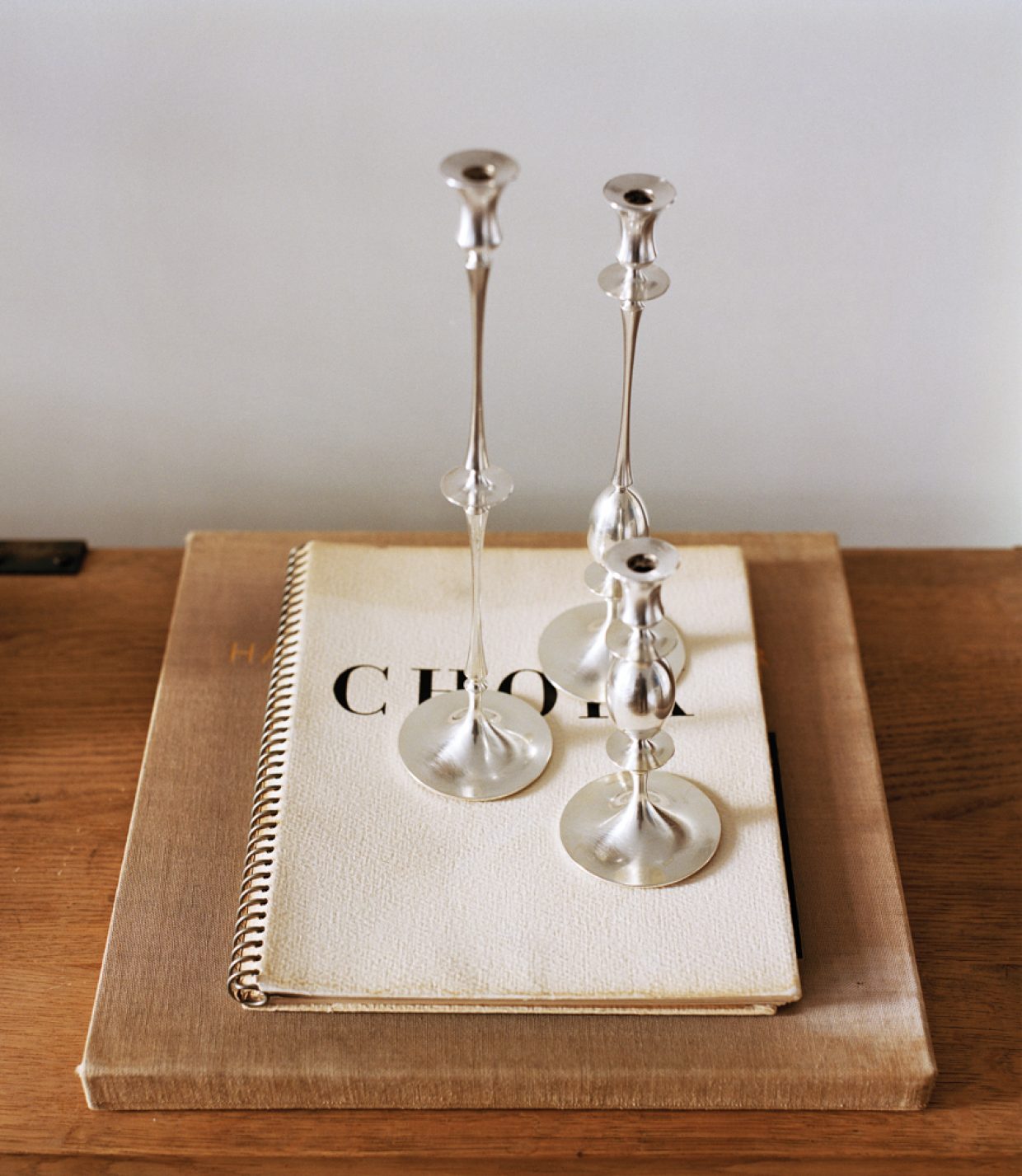 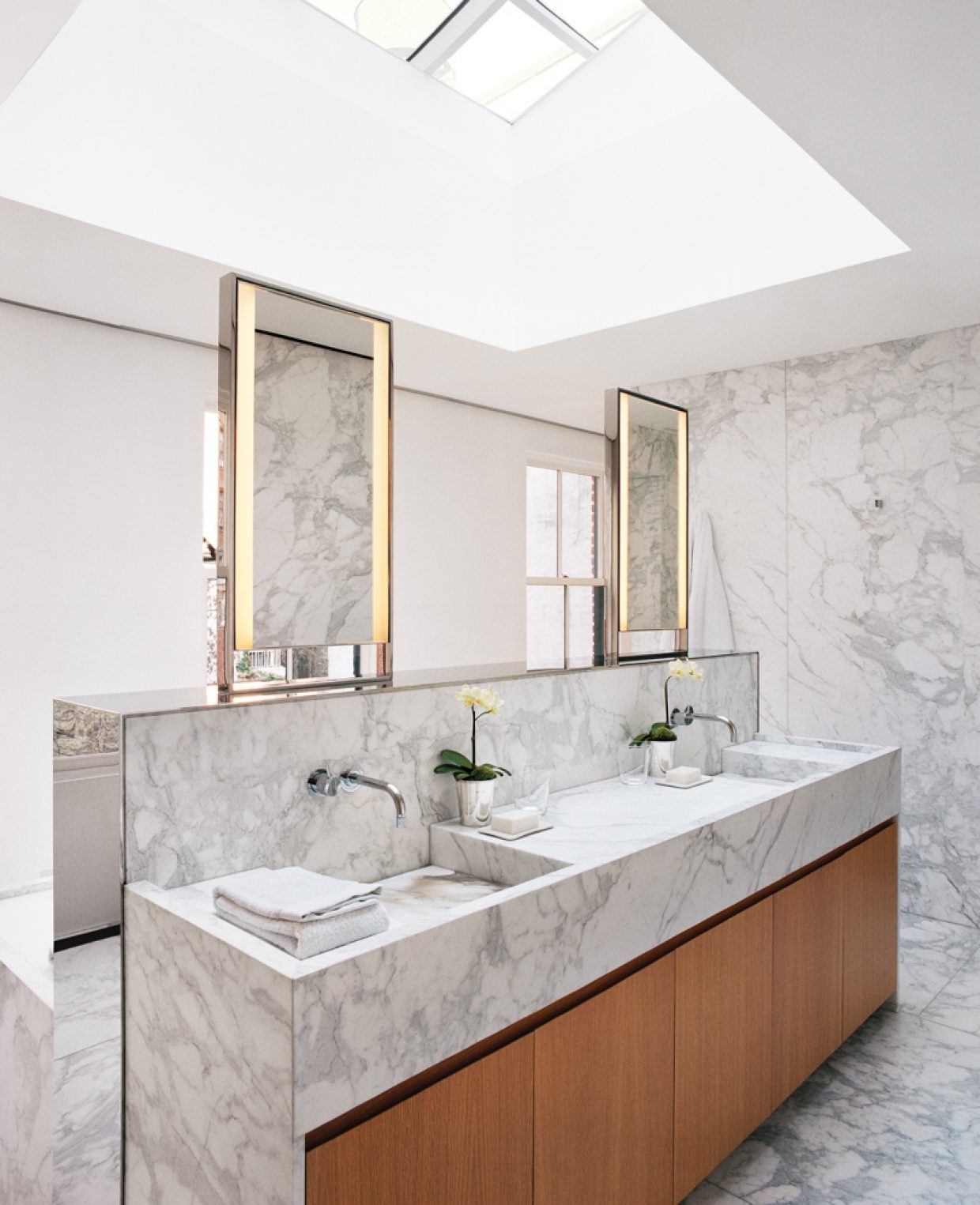 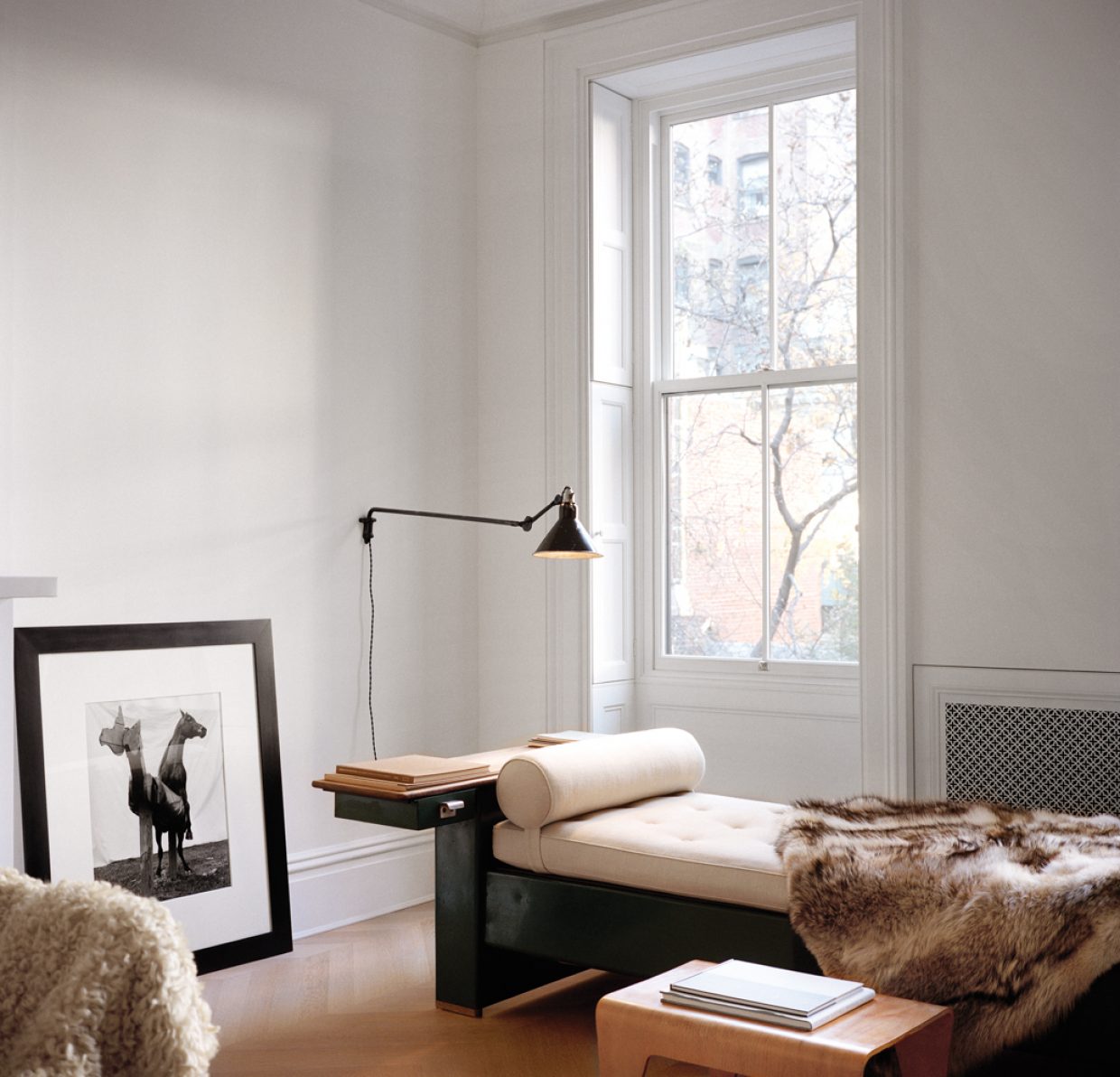 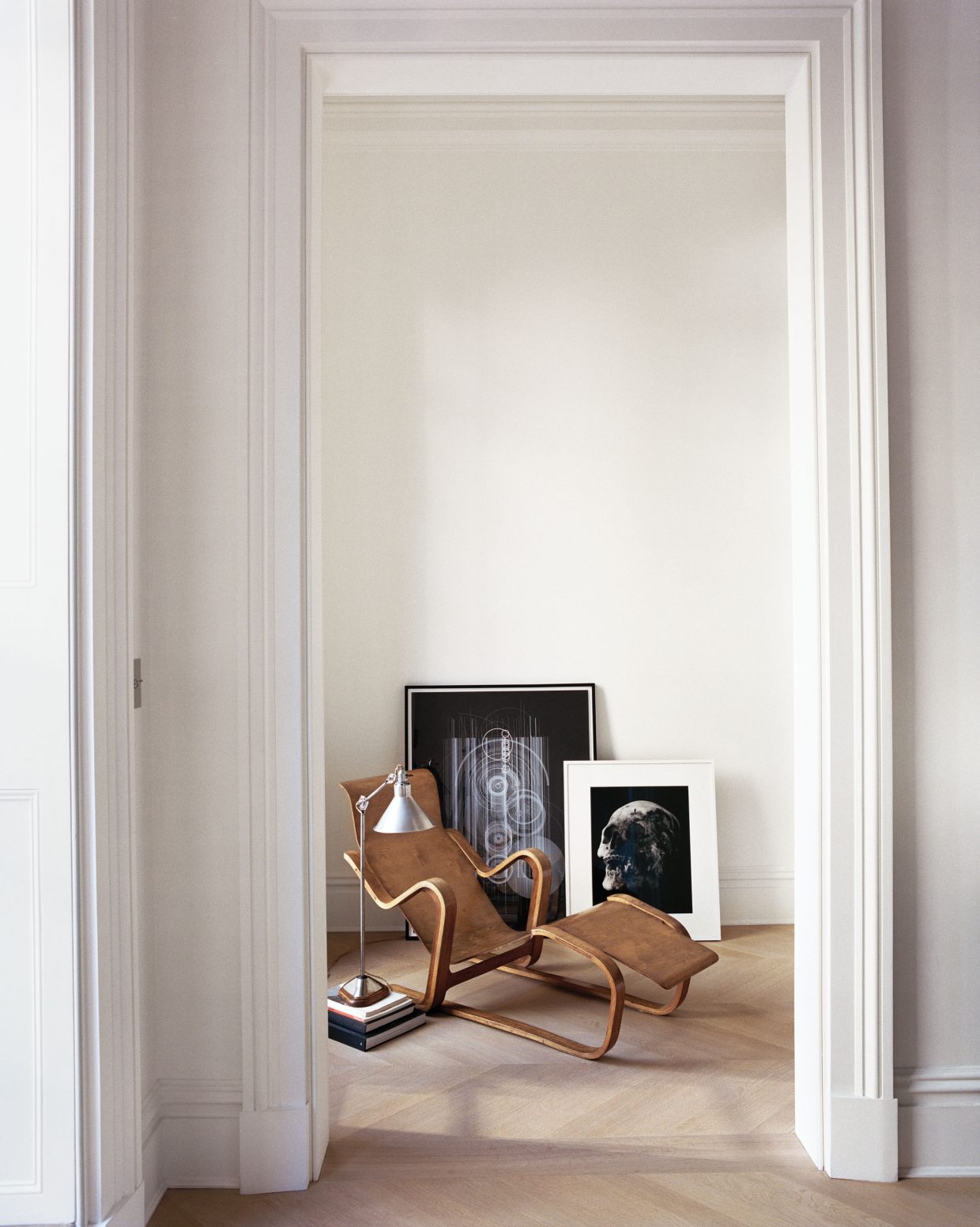 AS PEAK experiences go, it was a little on the quiet side. “I went to Marfa and I slept in Donald Judd’s bed, and I was very happy,” says art director Fabien Baron. The year was 1995, and Baron was working on a Calvin Klein ad campaign set at the minimalist artist’s Chinati Foundation in the grasslands of West Texas. Judd had died the year before, and Baron was in fact put up at the Arena, one of the buildings sometimes opened to guests, because hotels in Marfa were scarce at the time. What he remembers most, he says, was Judd’s careful positioning of the mattress in the middle of the floor—and the empty space.

In today’s maximalist era, Baron, 58, remains a connoisseur of emptiness. He learned at the knee of the masters: Klein and Giorgio Armani, for whom he’s directed ad campaigns; as well as architects John Pawson, who designed a rural Swedish farmhouse for him, and Deborah Berke, his collaborator on a downtown New York City loft. Before meeting his partner of 10 years, Ludivine Poiblanc, 42, Baron came within a hair’s breadth of buying a former garage in West Chelsea and converting it into a meditative sanctuary of his own. “One bed in a room—that’s it,” he says. “I could live like that.”

Instead, he and Poiblanc are ensconced in the relative comfort of a four-story, five-bedroom, Federal-style townhouse on the Gold Coast of Greenwich Village, just north of Washington Square. They moved in five years ago following a two-year renovation. The redesign brought the place into harmony with their tastes, which are classically rooted and distinctly French (she was raised in Paris, he in a southern suburb), and their sensibilities, which their professions have sharpened to a razor’s edge. (Poiblanc is a freelance fashion stylist and former editor at French Vogue and a contributor to WSJ. “I came from Paris 11 years ago,” she says. “People still ask me, ‘Are you visiting?’ So, I guess I still have a bit of an accent.”)

On a chilly afternoon, the couple, both in black sweaters, are seated at one end of a walnut dining table in their luxuriously spare kitchen with a pot of tea as their 6-year-old daughter, Louise, does homework. “Ludivine really likes things beautiful, warm, cozy,” Baron says, glancing up at a wall of cabinets whose rift oak doors, uninterrupted by handles, inscribe the faintest of outlines. Cozy is a relative term in this rigorous house, but the more time you spend here, the more you begin to see things their way.

The couple share a gift for editing down material gestures to absolutes that convey a lot with a little: the living room shelves, for instance, which are blades of satin-finished stainless steel; the wall panels of calacatta gold marble that function like paintings and complement Baron’s own photographs of sea and sky; the bedside tables cut from curbstone-height blocks of gray limestone; the immense nickel-plated door hinges; the ebony-colored stair rails that race up through the house like piano keys.

Back in 2010, the idea of stairs, and a house to contain them, was a new one for Baron. “We were coming from something super-sleek, modern—a Herzog & de Meuron loft on Bond Street,” he says. Poiblanc was pregnant, and when she suggested they look at townhouses, he dragged his feet. “I was always hesitant about brownstones—narrow, dark and no views,” he says. “Then we found this one, and it’s actually quite bright. The condition was fine. We thought, Maybe we just replaster.” He casts a glance at Poiblanc. “We changed everything! There’s not one thing in the house that hasn’t been changed except the front door. That’s it. That is it.”

Hand an art director with a minimalist streak an old house and ample funds, and it’s almost a given that he’ll return with a lunar landscape. The scenario was a bit different here because Poiblanc glimpsed the potential for a sort of Beaux Arts classicism in the building’s confectionary moldings, marble mantels and hardwood floors. These features were improved upon in ways that honored the mid-19th-century period of the house while striking a more elegant, Whartonian note. Baron spent months researching moldings, building a new vocabulary for the rooms distinguished by crisp edges and sharp reversals, like the serif typefaces that have become his professional signature. After a deep dive into parquet floor patterns, Poiblanc gravitated to Haussmannian chevron, which suited the building’s era and its 21-foot width.

To help the couple strike a balance between old and new, Baron turned to architect Jean-Gabriel Neukomm, who’d designed his downtown office in 2006. A frequent collaborator of John Pawson’s in the U.S., Neukomm had worked on Calvin Klein’s flagship store on Madison Avenue and several projects with Ian Schrager. Baron’s office project prepared him for what was to come with the townhouse. “We redid it down to the garbage pail,” Neukomm says of the residence. “We obsessed over all of that. When you’re done, it’s supposed to look effortless.”

They decided to keep the general floorplan of the house’s interior: garden-level kitchen, living room on the parlor floor above, a third level that holds bedrooms (for Louise and visiting siblings—Baron has three older children) and offices for the couple, and a master suite on the top floor. The biggest change introduced during the renovation is also the least visible: extending the ground-floor and parlor levels by four feet, an insignificant-sounding alteration that made a profound difference. On the ground floor, they gained a spacious living area giving onto the garden. Upstairs, the former “cigarette balcony” off the parlor floor became a planted terrace. Landscape designer Miranda Brooks spun both spaces into potent evocations of nature’s grandeur, the garden in particular recalling Paris’s Palais Royal—a favorite of Poiblanc’s—with its columns of boxwood framed by white gravel beds, a perimeter of woven-hazel fencing and pleached Cercis siliquastrum, or Judas trees, which bloom a deep pink in the late spring.

The tranquillity is echoed inside, where floors of pale oak meet white plaster walls with pleasing clarity. Positioned like statuary are the 20th-century European furnishings Baron has collected for over two decades: trophies by Pierre Jeanneret, Marcel Breuer, Charlotte Perriand, Jean Prouvé and Poul Kjærholm, as well as lesser-known pieces that resonate with the more iconic forms. In the living room, a pair of linear wall-mounted shelves with sliding metal doors is a favorite; Baron remembers the rush of finding the unsigned pieces in Paris. They’re clear cousins of his Jeanneret cabinet, which was made for a public library and is “super rare,” he believes: “When I saw it, I had to get it.” It’s currently in his home office, and he has stocked its cubbies with wooden printing blocks, relics that recall his father’s profession as a newspaper designer in the French capital.

Baron himself made his name by recapturing the drama of black type on a white background. In his late-’80s layouts for a reimagined Italian Vogue—followed by Harper’s Bazaar in 1992, French Vogue in 2003 and now Interview, where he’s done three stints and returned as editorial director in 2009—he’s made a hero of negative space, allowing letters to drift around on the open waters of the page like so many elegant pool floats.

“Fabien sees things very precisely,” says Karl Templer, his longtime lieutenant and currently the creative director at Interview. “That’s why [his work is] so imitated. Roots and tradition, but he makes it modern.” At his own branding agency, Baron & Baron, he has worked with top photographers and stylists to shape identities for brands including Givenchy, Fendi and Michael Kors, and across platforms, from TV and digital media to product and packaging. Poiblanc is a frequent collaborator and has worked with Dior, Jason Wu and Thierry Mugler.

Despite a lack of color or even much decoration in the townhouse, the pervading atmosphere is not one of absence but presence. “There’s a warm feeling, which is a bit new for Fabien—maybe it’s Ludivine’s taste,” says fashion photographer Mikael Jansson, a longtime friend, of the interior. Over the years Jansson has become their de facto real estate broker, finding a buyer for Baron’s Swedish retreat and tipping them off to their house after deciding it was too much for him. “Fabien’s last place was modern and sleek and a bit cold for me. This one is super, super nice.”

On a tour instigated by Louise, Poiblanc pauses in the entrance to the living room, where an oil-stick drawing by Richard Serra featuring a bar of white sandwiched between two black planes fills the facing wall. The double parlor is pinched like an hourglass by a shelf-lined passageway at its center; tightly dressed white sofas and low stools that pull up to gargantuan coffee tables—designed by Baron—echo one another on either side.

“We call this the museum, because we don’t go so often,” Poiblanc says. “Louise came up with that name,” adds Baron, with a laugh. “She always says, ‘You can’t touch this, and you can’t touch that—it’s Papa’s things.’ She makes me feel like the bad guy.”

Five years into townhouse living, he still resents the three-story climb after a forgotten phone charger or a pair of sneakers—Poiblanc has been known to chase them down for him—but he’s coming around. When morning light suffuses the master bedroom, Baron admits to lying in bed and “watching the drawings” made by the windows’ rippling restoration glass on the walls and the floor. “It feels like France,” he says. “It feels like something that’s been around for a long time.”

His pride is understandable, given the reconsideration of every wall, hinge and corner. The front door may have remained the same, but Baron made his mark here as well: Dropped into the marble floor of the vestibule are two polished-nickel street numbers. The serif font is custom.