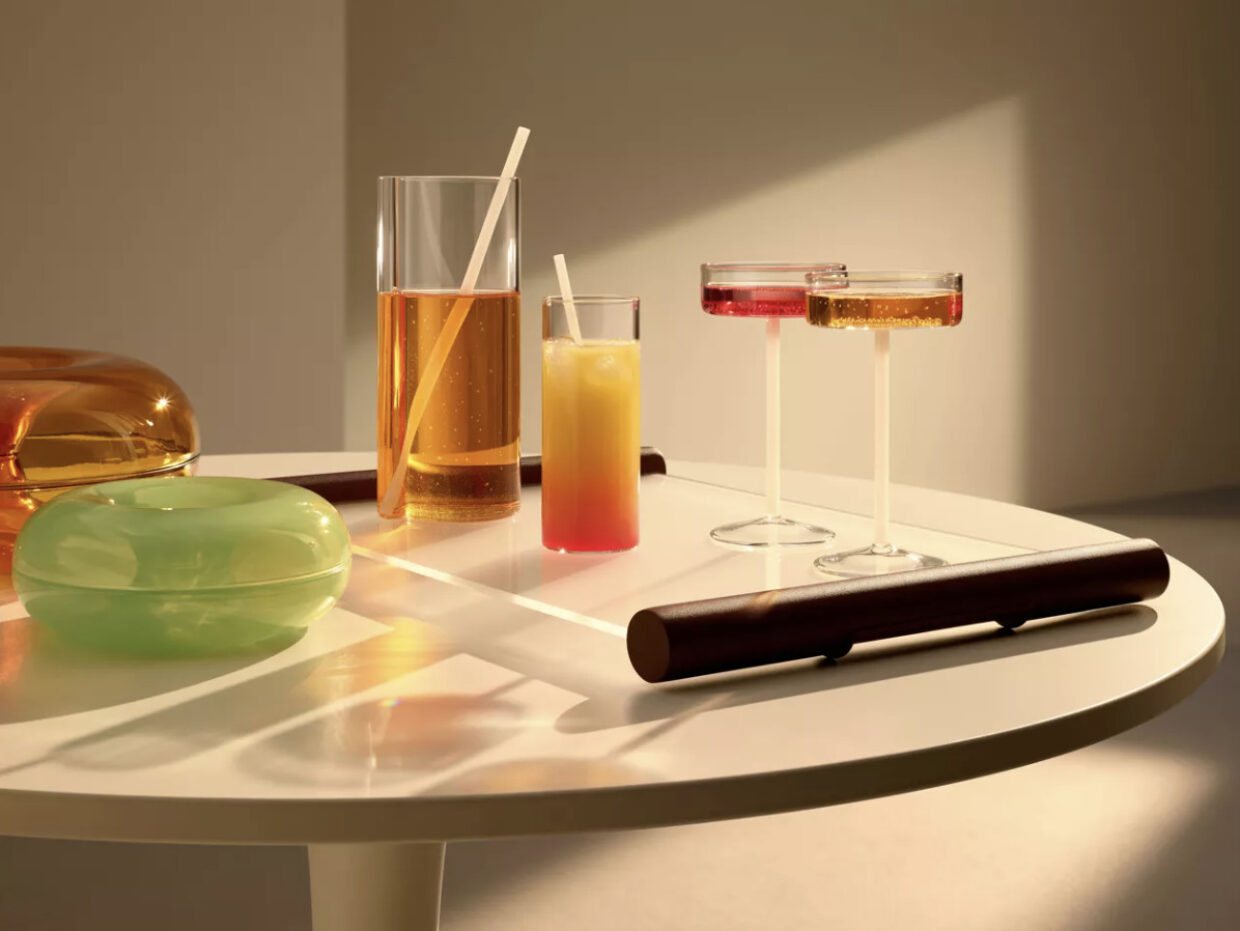 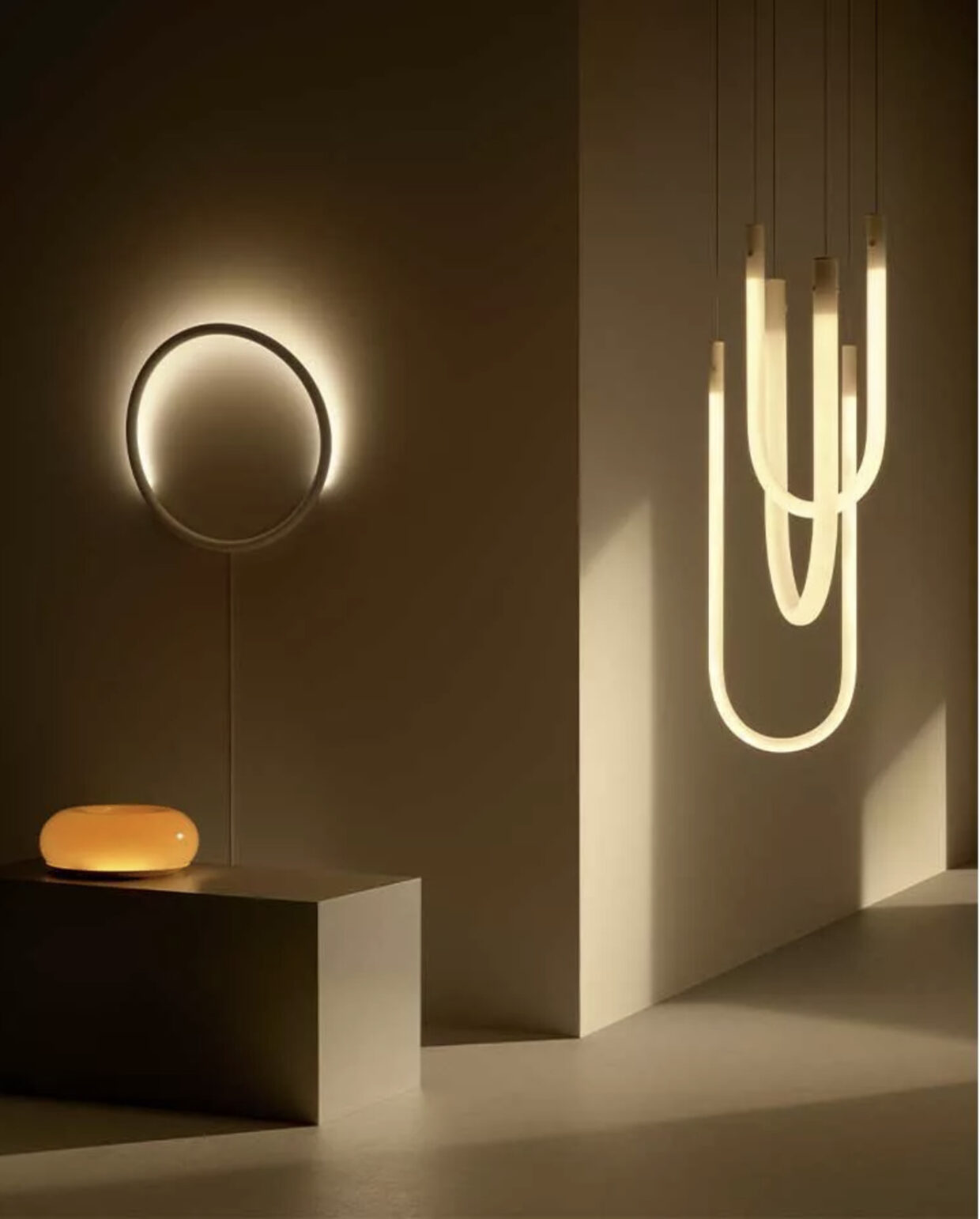 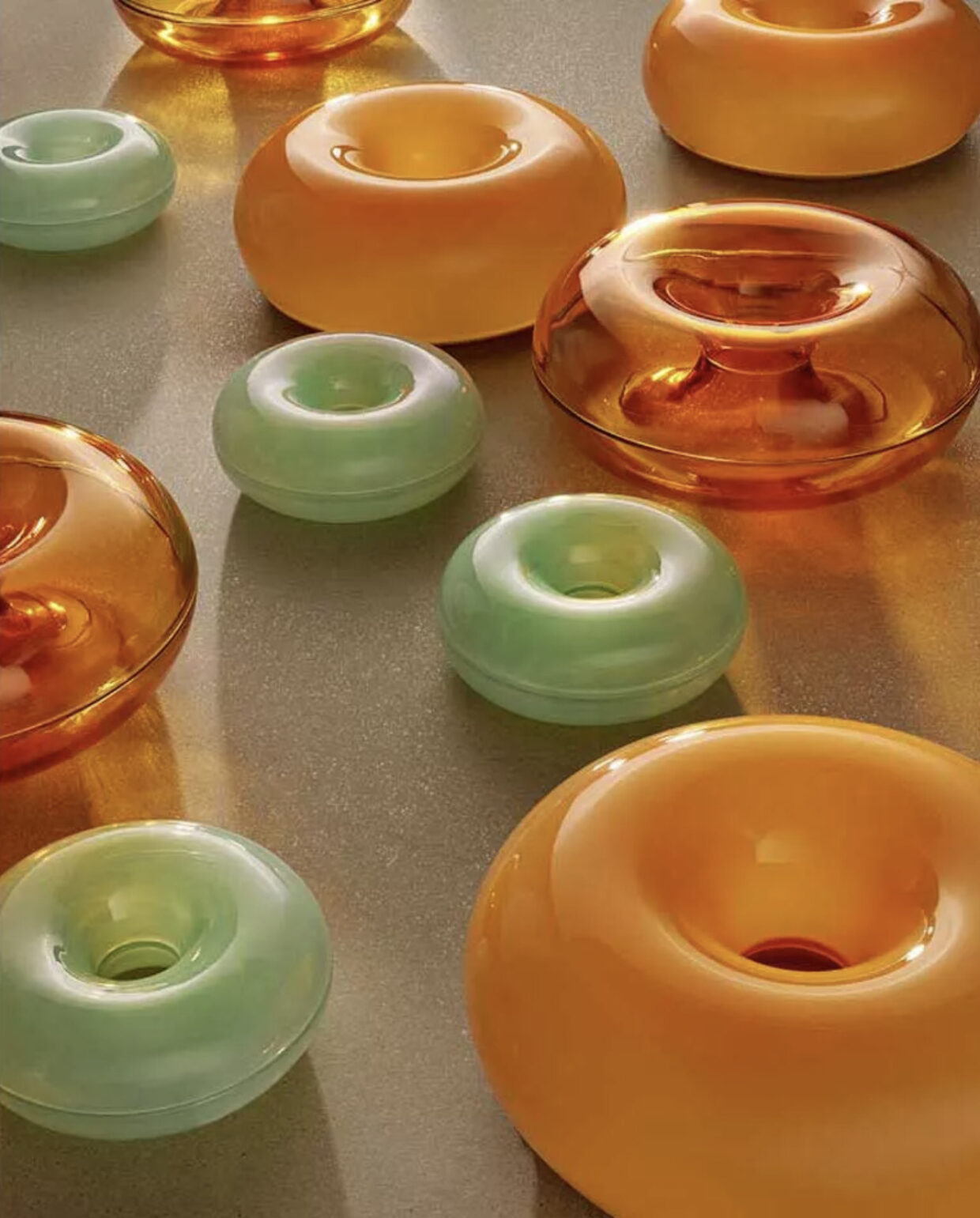 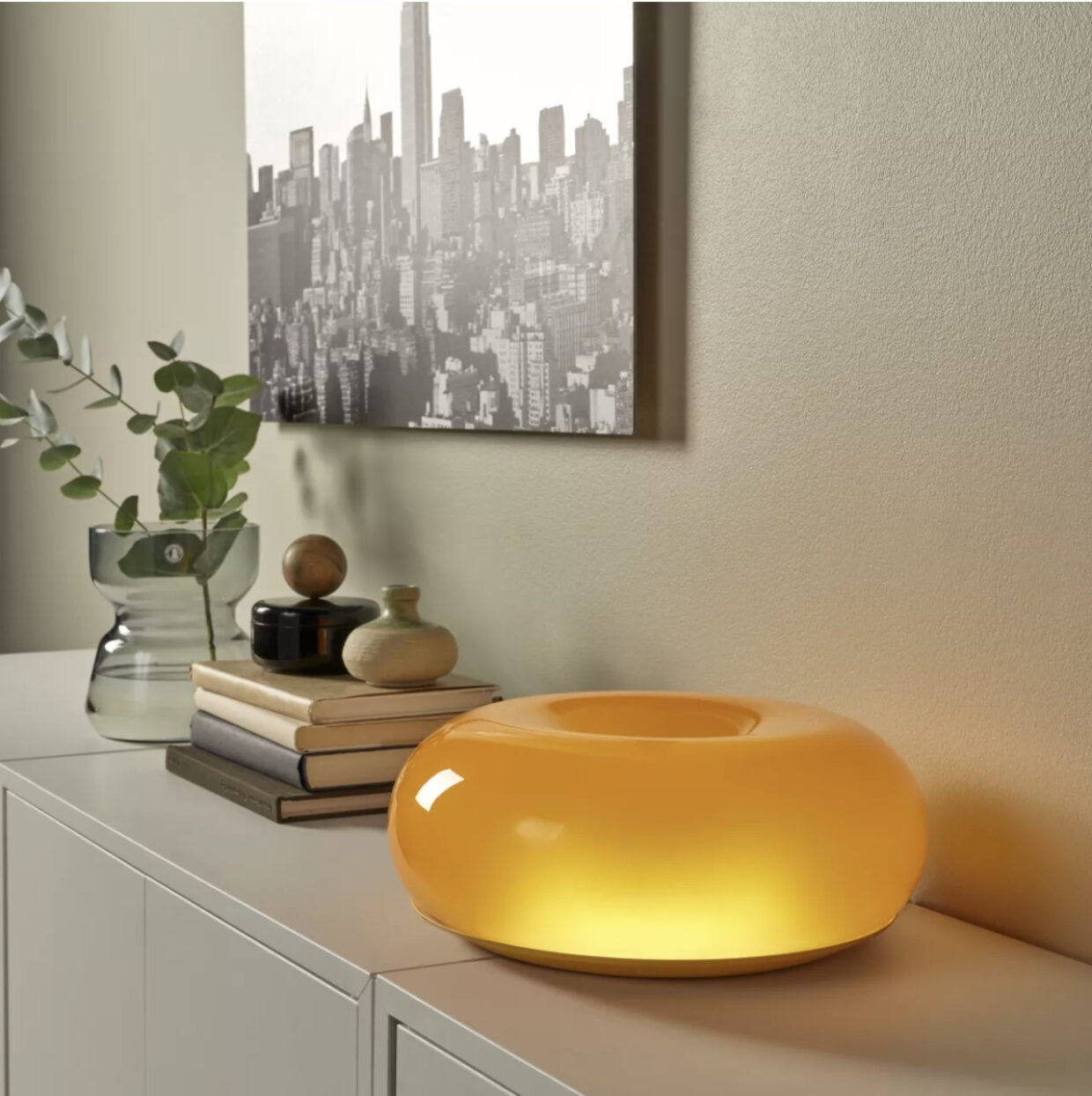 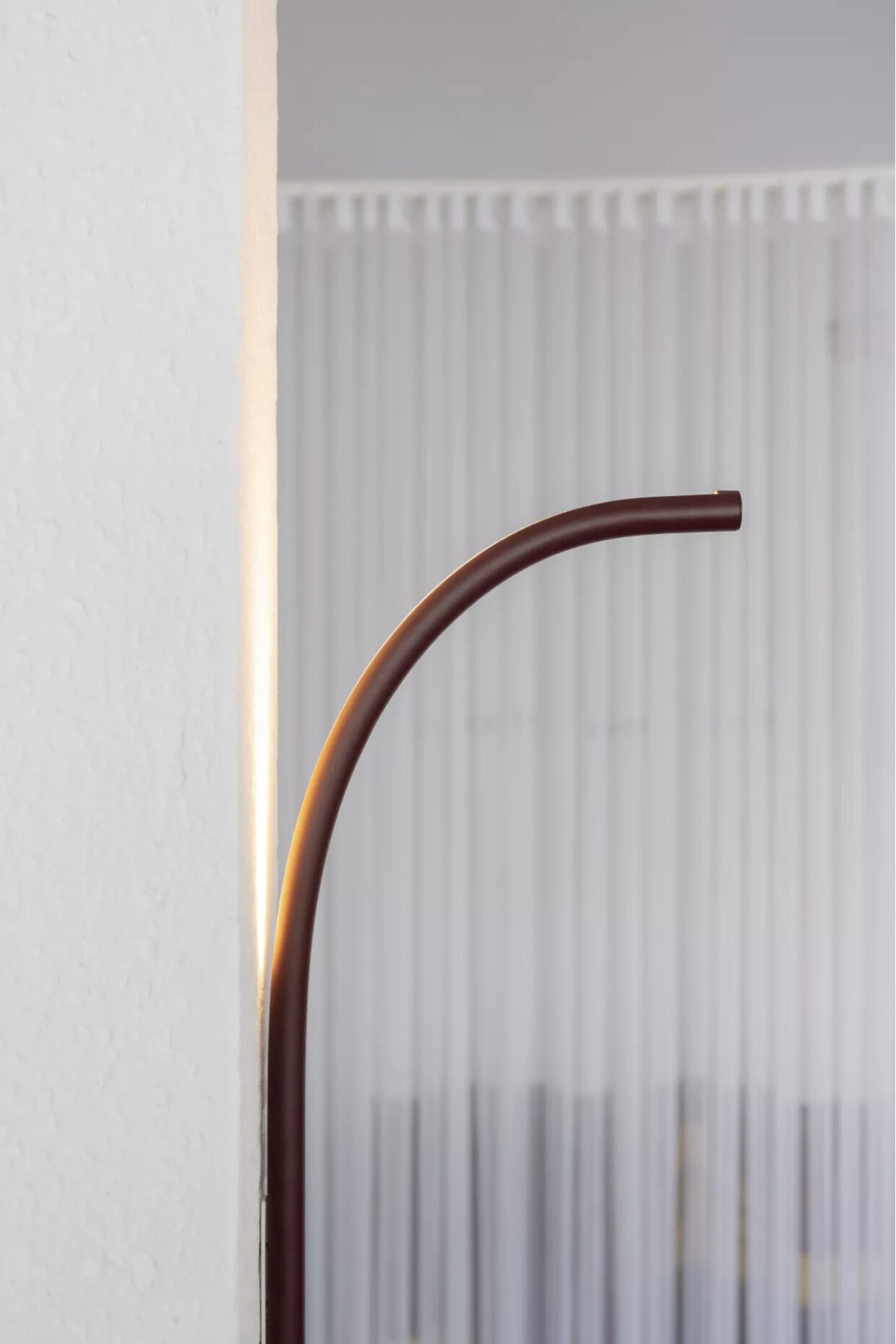 Ikea and Sabine Marcelis have unveiled their much-anticipated ‘Varmblixt’ collection. Originally previewed during Milan Design Week 2022, the collection is fronted by two LED lights with a broader collection of home accessories and glassware now added to the lineup.

Sabine Marcelis’ ‘Varmblixt’ collection for Ikea is formed of 19 pieces, comprising a series of limited-edition pieces as well as 4 LED lighting designs that will remain part of Ikea’s collection long-term. These include a donut shaped table/wall lamp made of orange glass; a pendant lamp; a circular wall lamp and a wall lamp that doubles as a mirror.

‘I wanted to take an unexpected approach to exploring the idea of how lighting functions within the home and to inspire people to consider new shapes and elements which blend into and highlight different types of interior spaces in new, bold, and artistic ways,’ says Marcelis upon launching the Ikea collection.

As well as the lighting, the ‘Varmblixt’ collection includes glassware such as a vase, champagne coupes and 35ml glasses, glass drink stirrers and carafes, donut-shaped glass bowls with lids in green and amber, paper napkins and low pile rugs in orange gradient inspired by sunsets, glass shelves and trays as well as coffee tables that mimic the designer’s popular Candy Cubes.

‘When I select designers [I ask them], “What do you have on your mind? What is your vision? What do you want to change in this world?”’ explains Henrik Most, creative leader at Ikea. ‘For me, it’s about finding the original signature a designer has, and what it is that separates this person from others. [But] the question is: “How do you define originality?” As an aesthetic person, I hope I have a feeling for when somebody has an originality that stands out. With Sabine, I recognised it from the beginning.’

For the collection, Marcelis sought to create a piece focused on art and emotion and that had life far beyond functionality. ‘[Light] is a very powerful tool to design with, because you can drastically change how you experience a space just by the temperature of the light, or the way it highlights different parts of the architecture it’s placed in,’ she says.

According to Most, the ‘open-minded’ conversation, which began virtually during the pandemic, led to a ‘bunch of ideas’; wide-ranging in concept and geometry. ‘It was a very tempting menu that she presented,’ says Most. ‘It was super hard to choose. So we went through all the concepts, and the functions and tried to narrow it down to sync to kind of a curational thread where light, material and colour were the focus.’

The standout piece of the ‘Varmblixt’ collection – and one that garnered much attention when the collection was first previewed – is a circular wall lamp, the top of which appears to ‘bounce’ off the wall creating a dramatic glow behind. The minimal lamps, previewed in linear and circular versions, can either be configured in multiples or as single wall pieces. When turned off, they can function as sculptures in their own right. ‘The concept was to take a singular line, and to gently pull it off the surface it would be mounted on. And that gap would allow for a void of light to flood on the surface’, says Marcelis. ‘Maximum impact with minimal materials.’