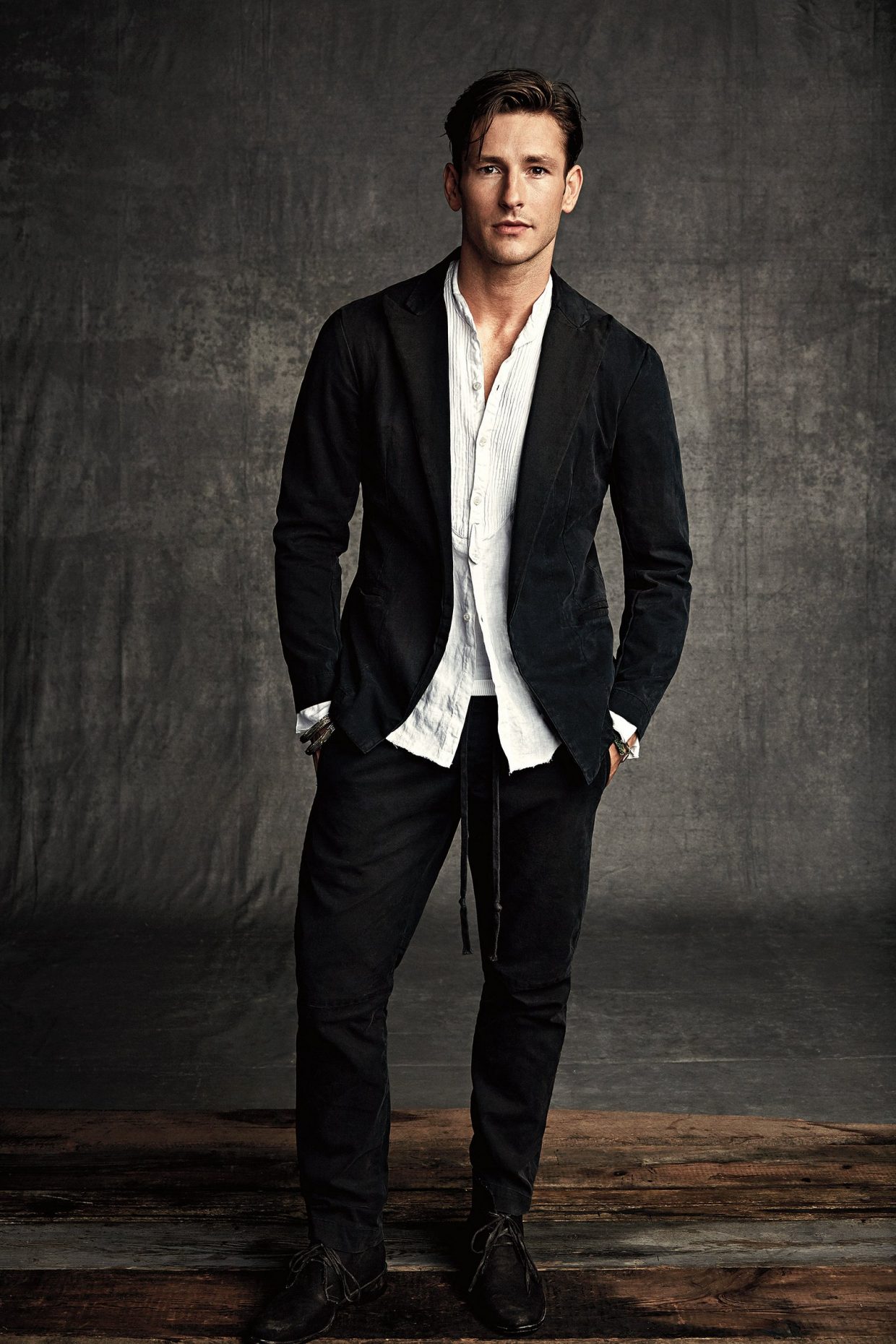 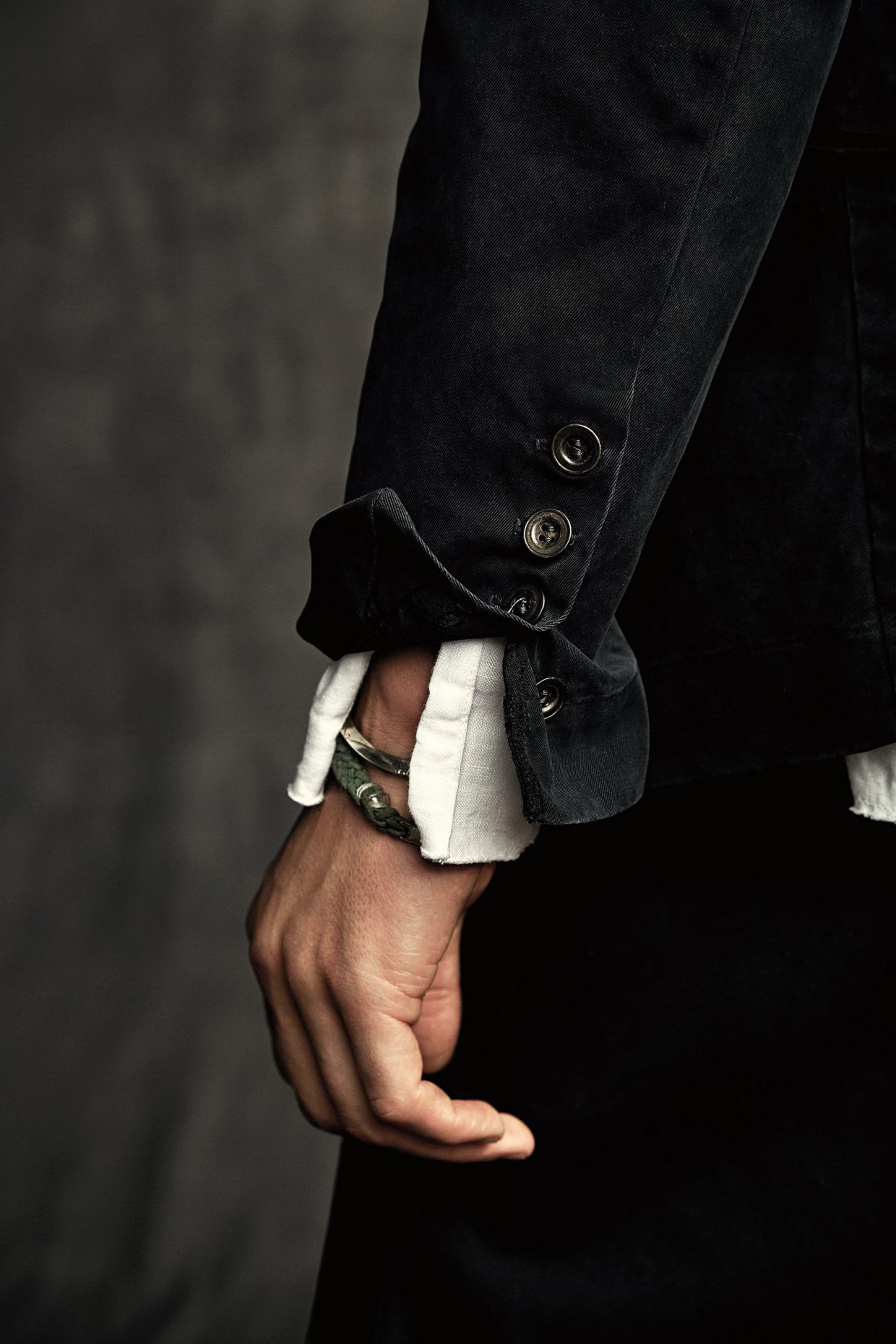 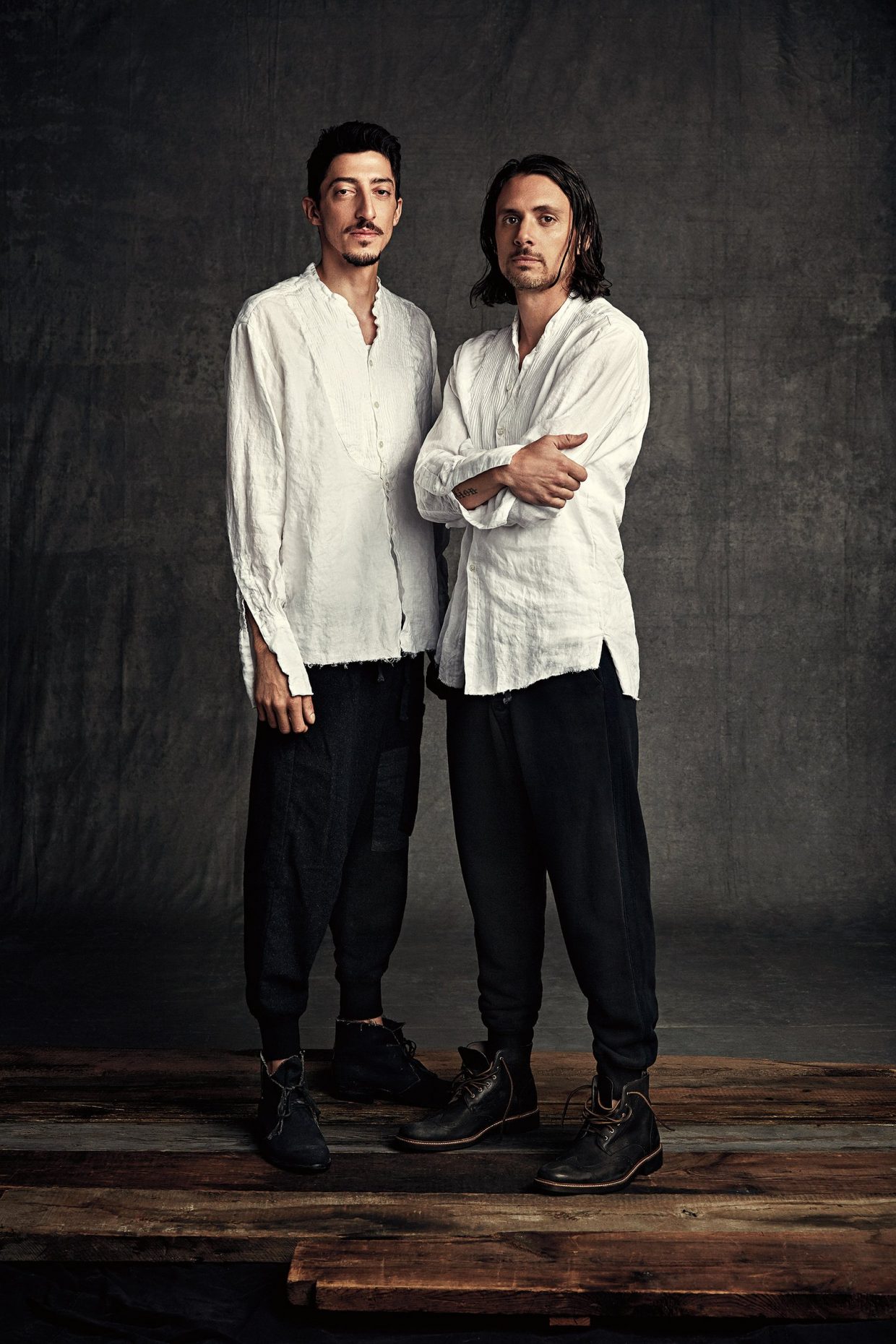 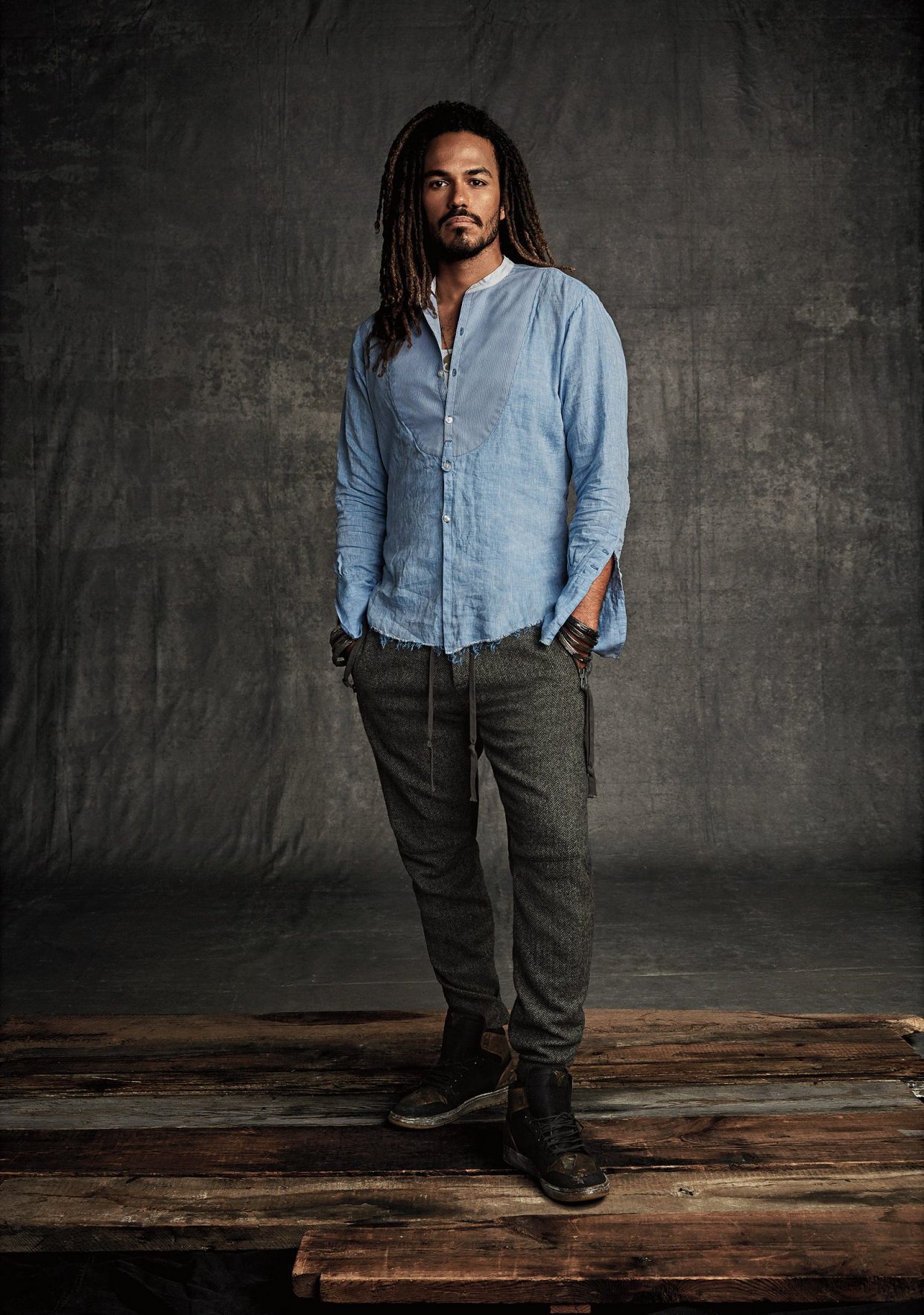 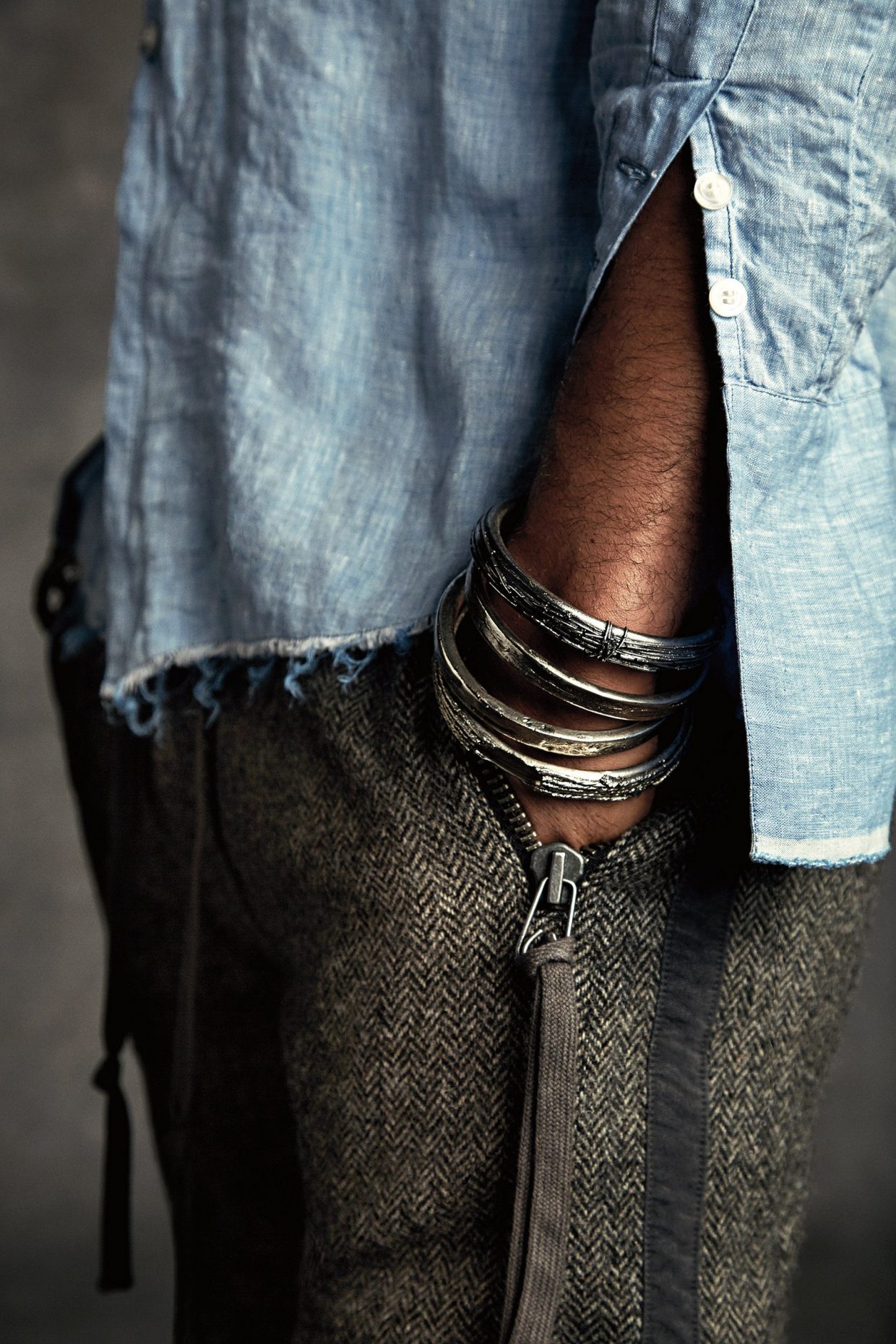 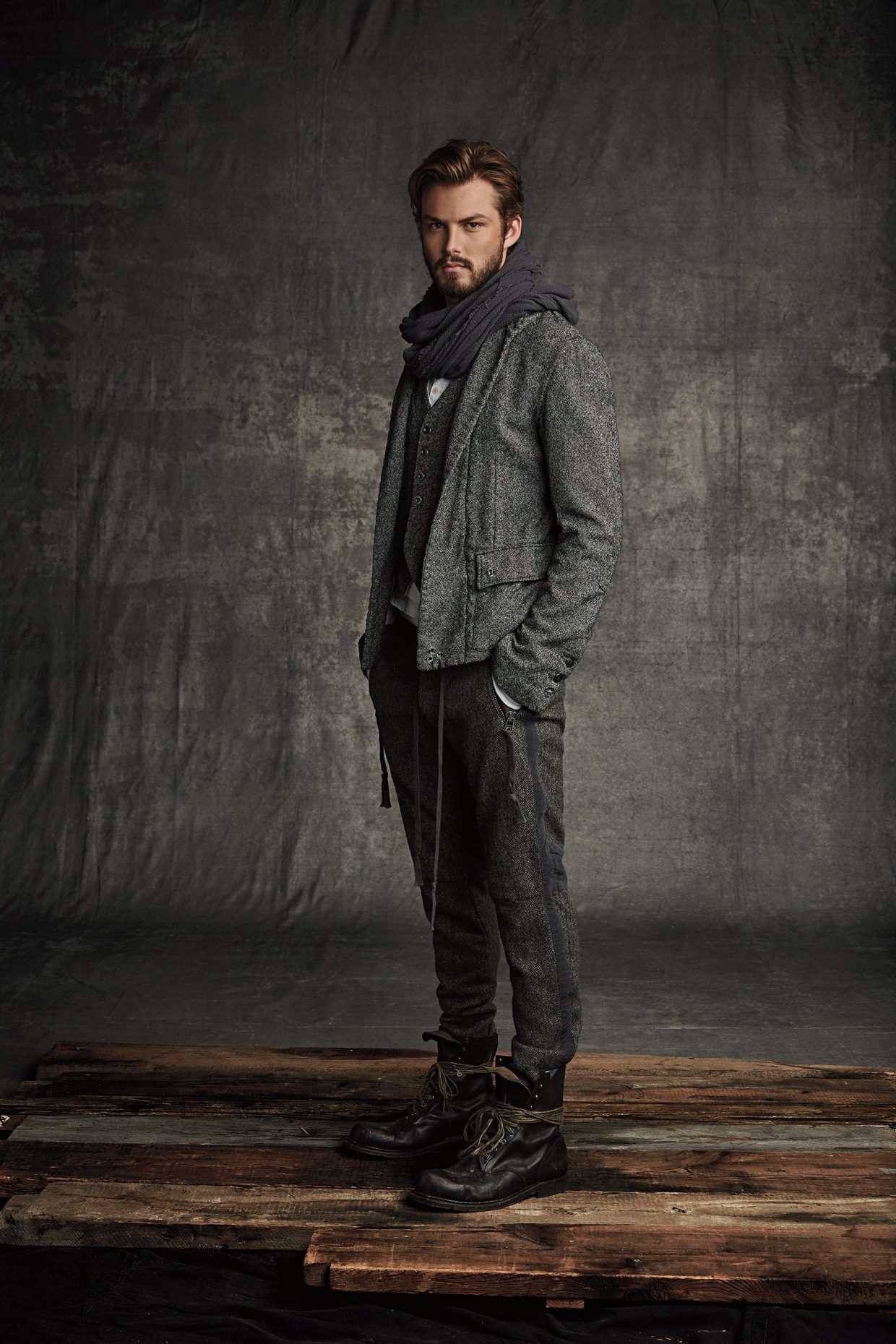 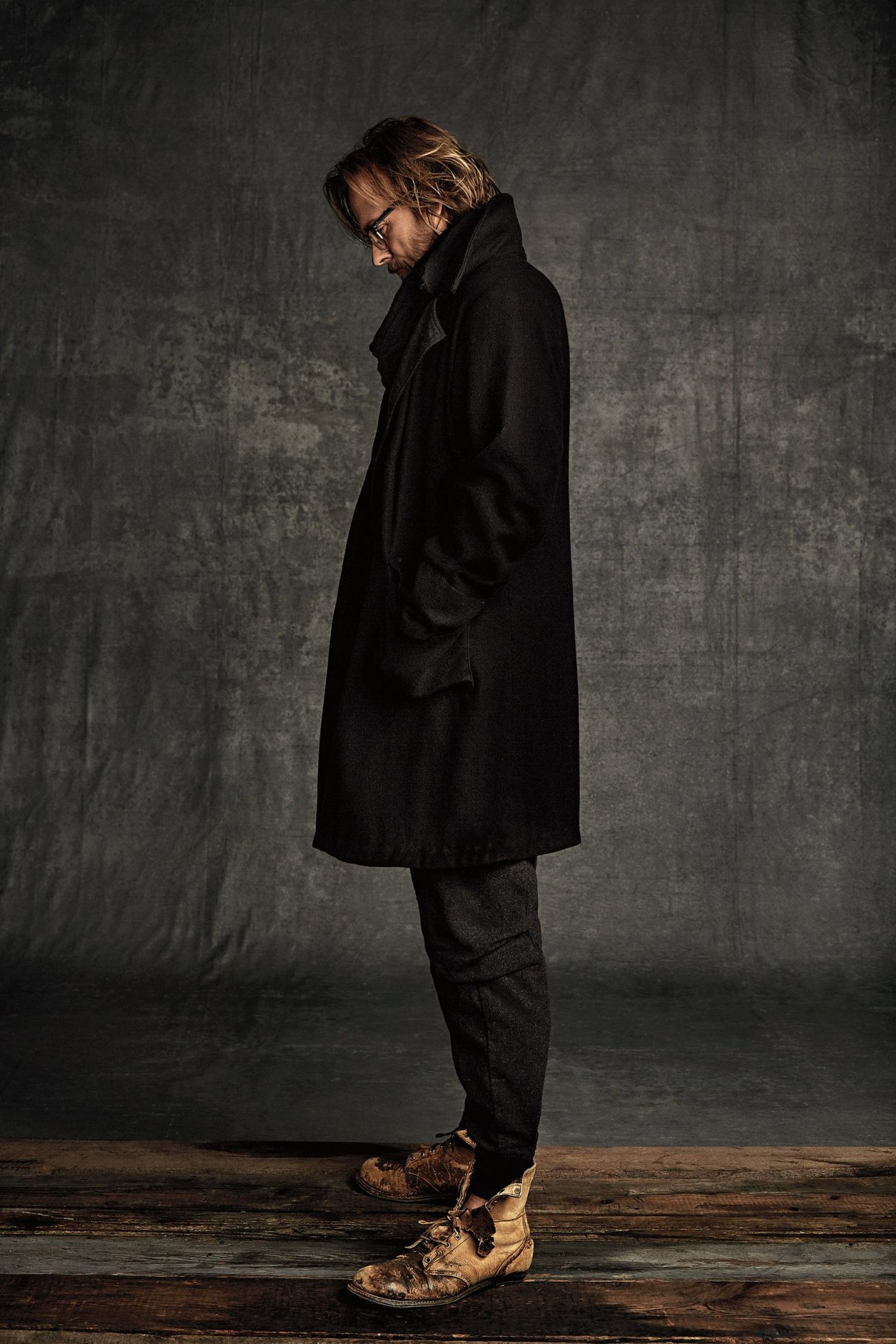 When the CFDA called Greg Lauren to tell him Banana Republic wanted to do a men’s capsule with him, he joked, “Are they sure? Have they seen my collection?” Lauren’s aesthetic is artisanal, hand-distressed, and heavily influenced by vintage military fabrics; Banana Republic’s, on the other hand, is preppy and office-appropriate. But both brands are rooted in classic American style—they just subvert it in different ways. “We have so many similar reference points, even if we’re on completely opposite ends of the spectrum,” Lauren says. Another reason the collab makes sense? Lauren was already thinking about expanding his business and how to reach more people. “A business can’t sustain itself if every piece is handmade and artistically done, and I knew it was time to consider how I could make my message a bit more accessible for a wider audience,” he explains. “And no joke, just as I’m thinking about this, the CFDA calls me. It was meant to be.”

Lauren worked closely with Banana Republic’s senior vice president of design Michael Anderson to find “a middle ground” between his artistic vision and Banana Republic’s simpler, more accessible signatures. Think: chambray shirts with unfinished edges, herringbone joggers, lightly distressed tweed blazers, crinkled linen shirts, and a no-frills cashmere topcoat. All 16 pieces are hitting stores tomorrow. “I didn’t want to take my most creative [runway] pieces and dilute them into something that was suddenly affordable by using cheap materials or without the handmade approach,” Lauren explains. “The first idea I had was the stonewashed twill tuxedo. It’s exactly the way I like to approach black tie. No one even wears black tie to events anymore, but it fits beautifully and you can roll it up in your bag to wear to a beach wedding or mixed with other pieces.” The tux has silk faille lapels for just a touch of the traditional, and comes purposefully rumpled—no steaming required.

Much of the collection comes in twill, a Banana Republic staple fabric dating back to the late ’70s. But softness is key for Lauren, so he tapped his Los Angeles resources to stone-wash and hand-distress many of the pieces so they felt lived-in. That’s good news for guys who end up wearing athleisure or basic jeans and T-shirts on the weekends. “Guys don’t want to sacrifice comfort for fashion, but at the same time, they want to update their look more than ever,” he says. “They want a different version of the pieces they already have. So it was important to find that balance and make comfortable clothes with a little bit of an edge. I think that’s what Banana Republic has always been about. We still have hand-stitched details, a few patches, distressing, and we washed things multiple times so it feels like you’ve had it forever.”

“I think our customer is going to appreciate the uniqueness and quality of the collection, and hopefully it will inspire him to think about menswear in a new way,” BR’s Anderson adds. It will certainly be a departure for Banana Republic’s average customer, but we have a feeling he’ll be ready for a change. What guy doesn’t want to look laid-back and a little rugged? There’s no better way to capture that low-key, not-trying-too-hard vibe than with one of Lauren’s distressed hoodies or wool joggers. “I always say that I think every guy out there has an alter ego that doesn’t really get to be seen,” Lauren says. “Maybe they’re trapped in their day jobs or have this fantasy of [what their life could be]. I think this collection brings out that adventurous spirit and individuality in guys who might not be able to express it on a daily basis.”

The experience also gave Lauren new ideas for growing his business, including a new approach to Fashion Week. “The last two years were so big for me with shows, but I know there are exciting and unique ways to get my message out there. There are other ways to make a point and transport people so they can think differently about clothing, which is my whole theory about fashion,” he says. “We don’t need more clothes out there, but there’s always room for a unique approach and to change the way people think about things. And I’ve been wanting to create a more approachable line or addition to my collection, so the capsule was a great way to start in that direction.”