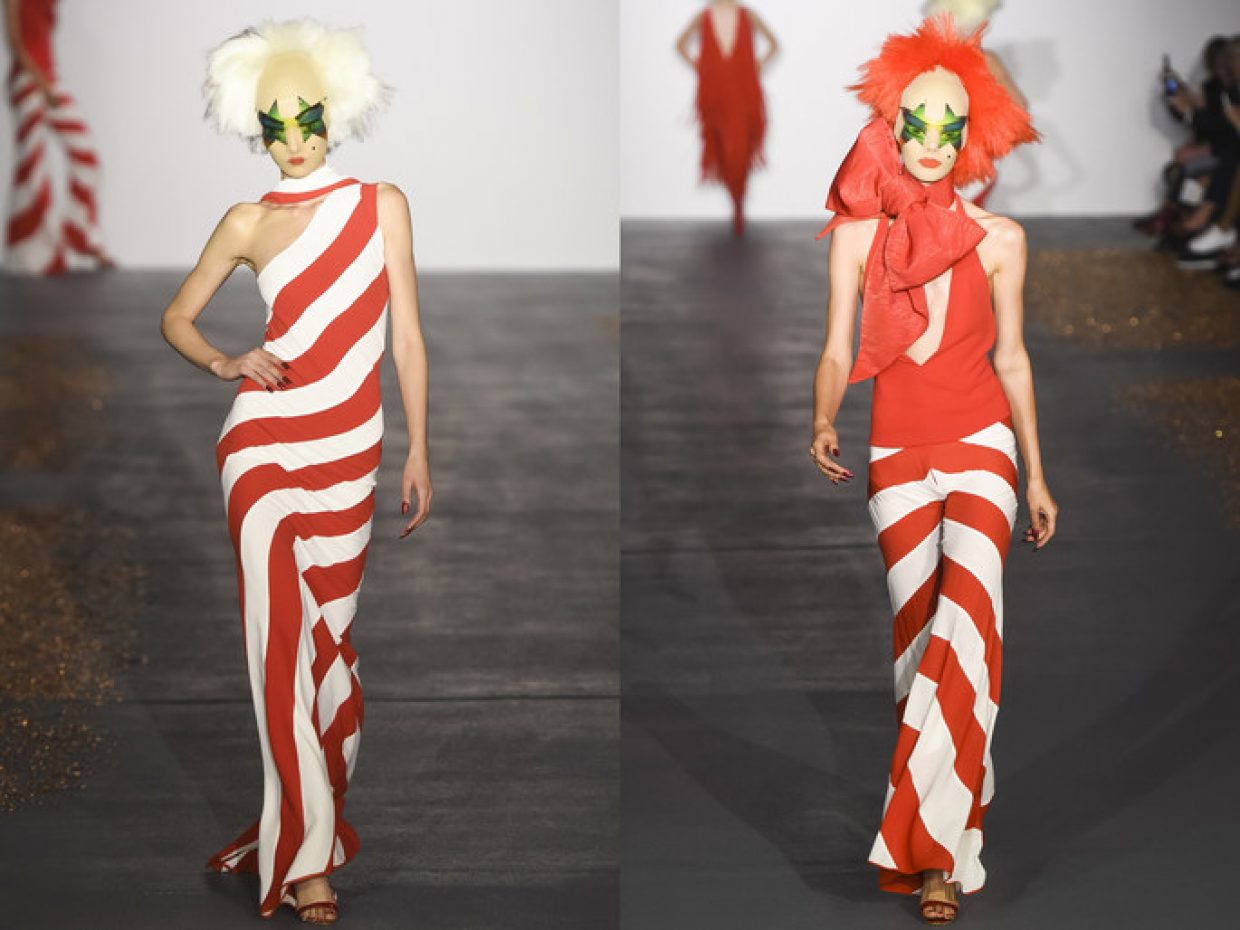 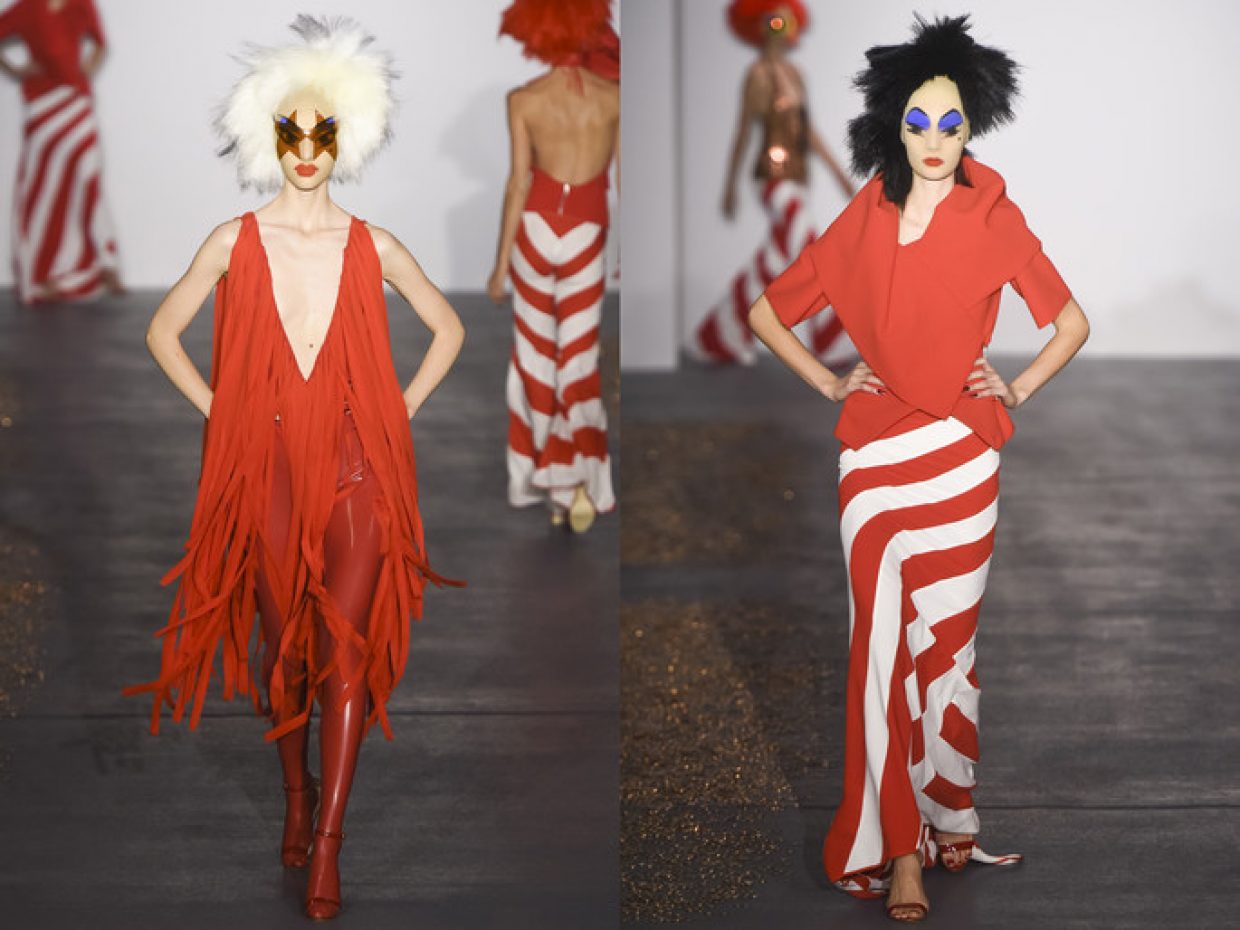 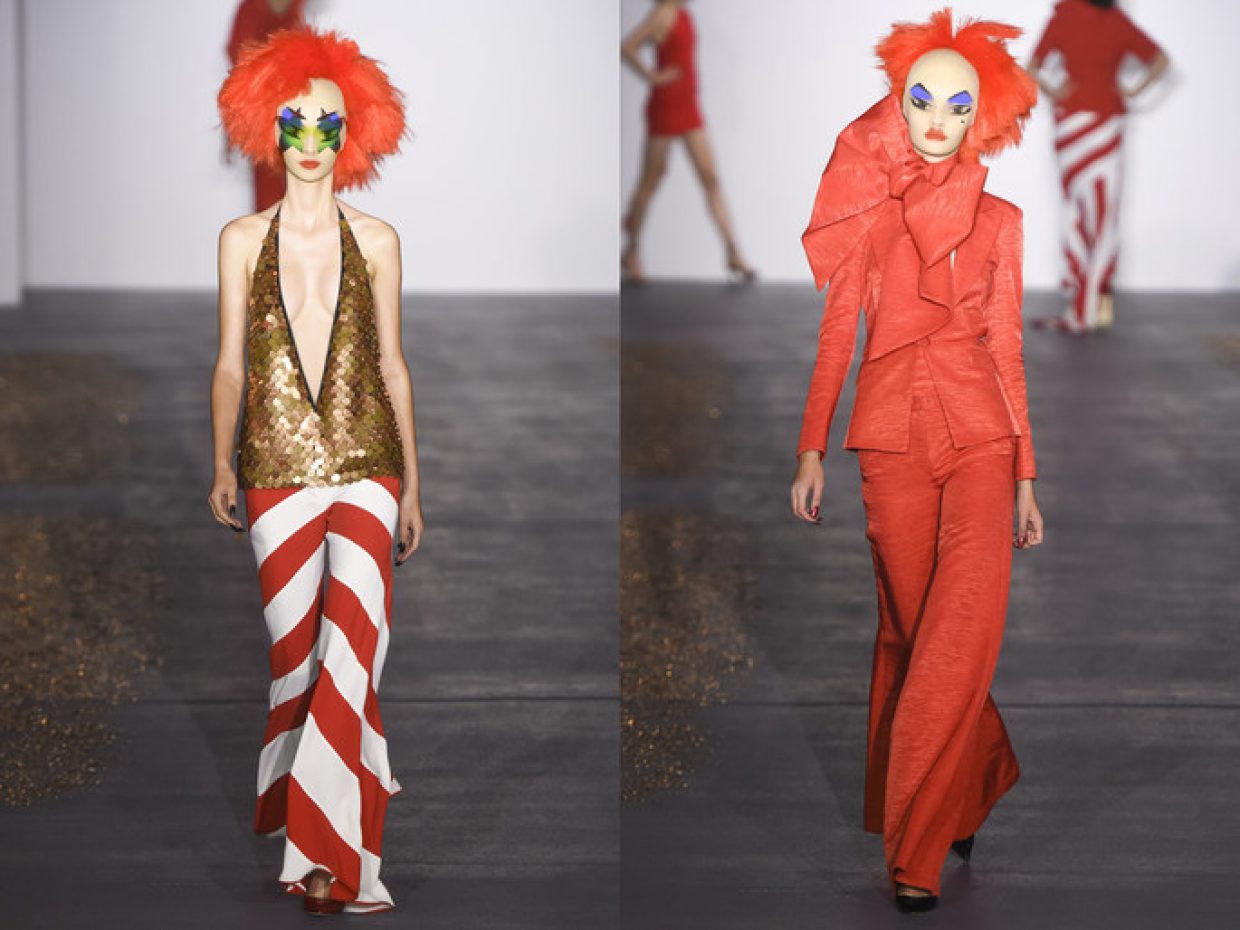 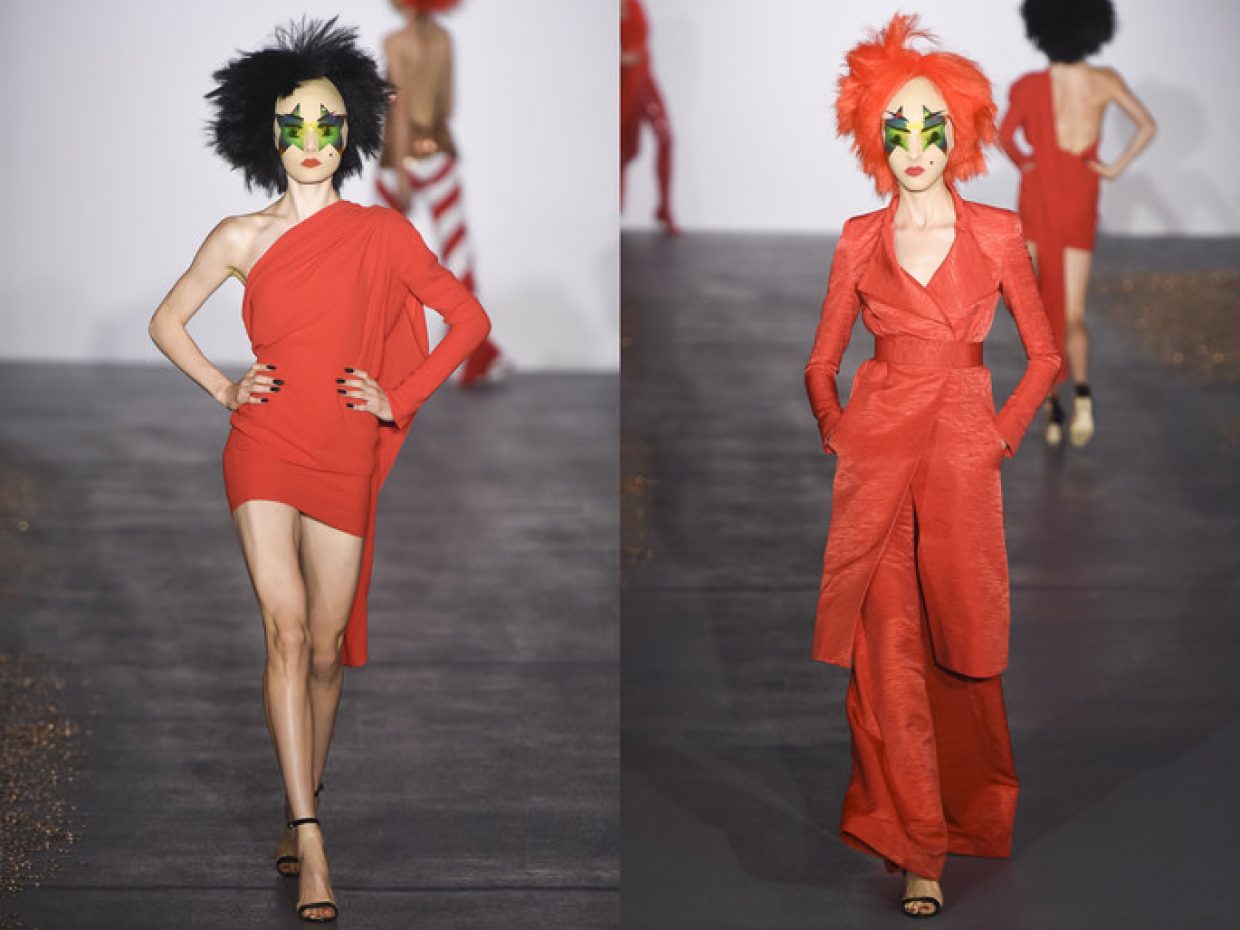 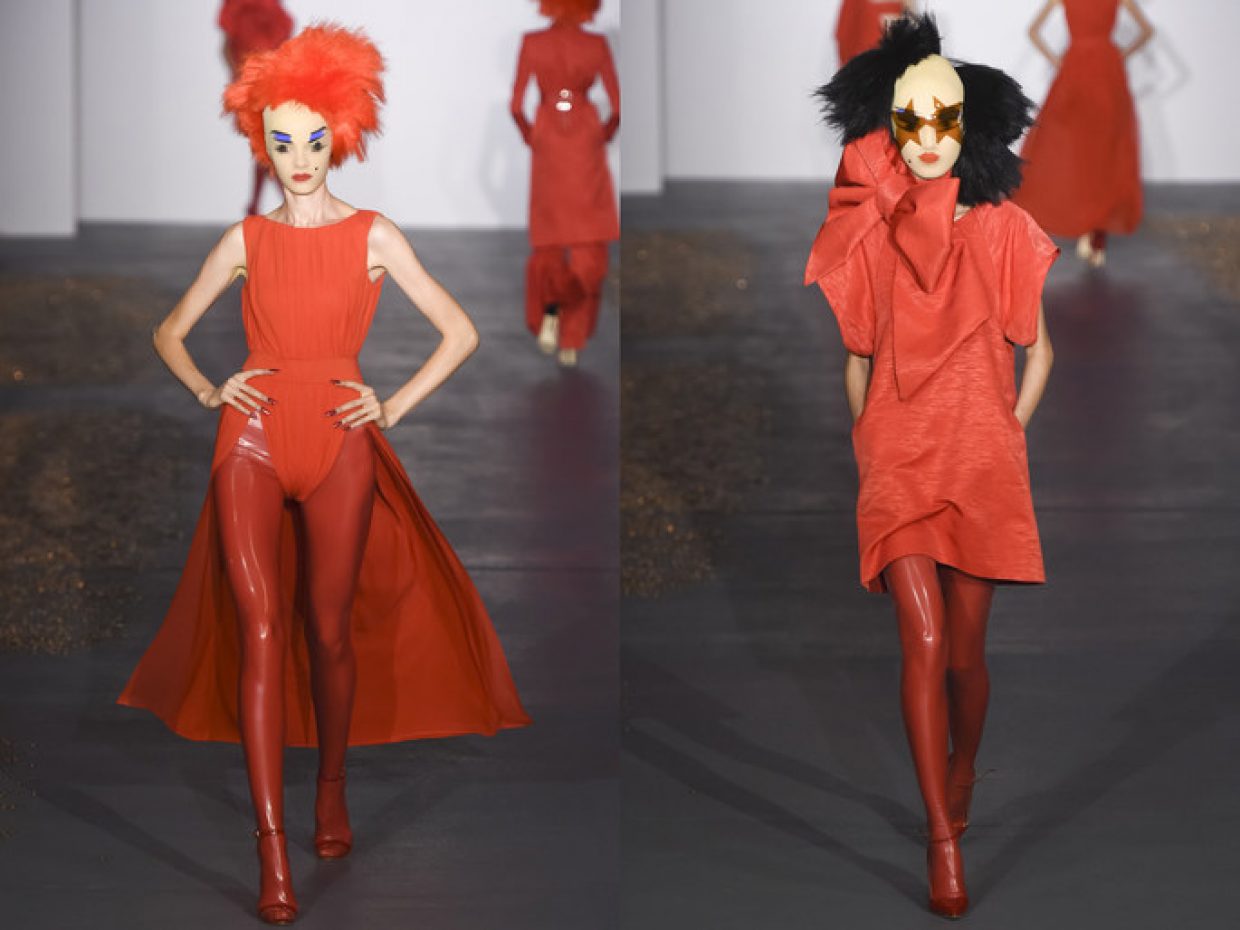 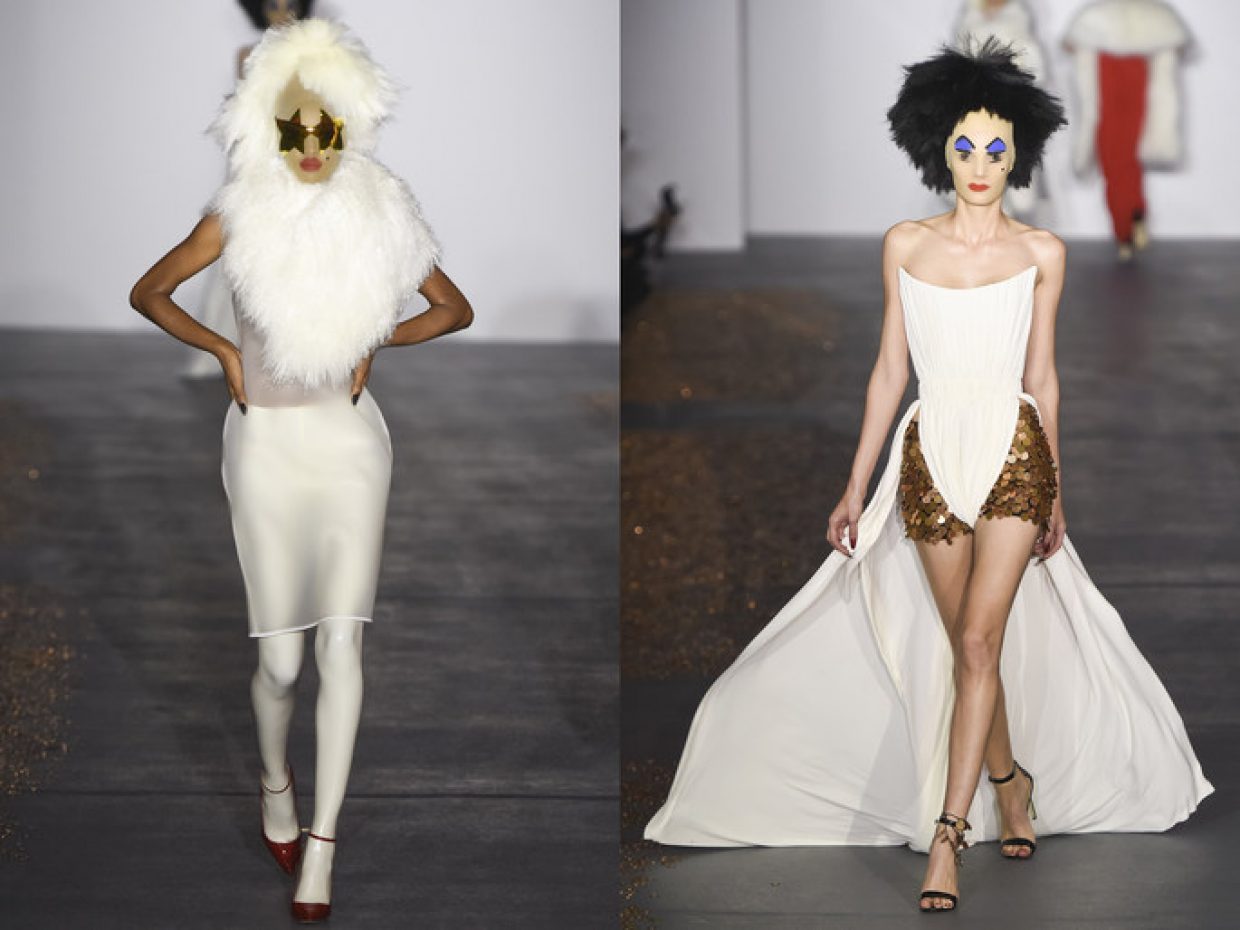 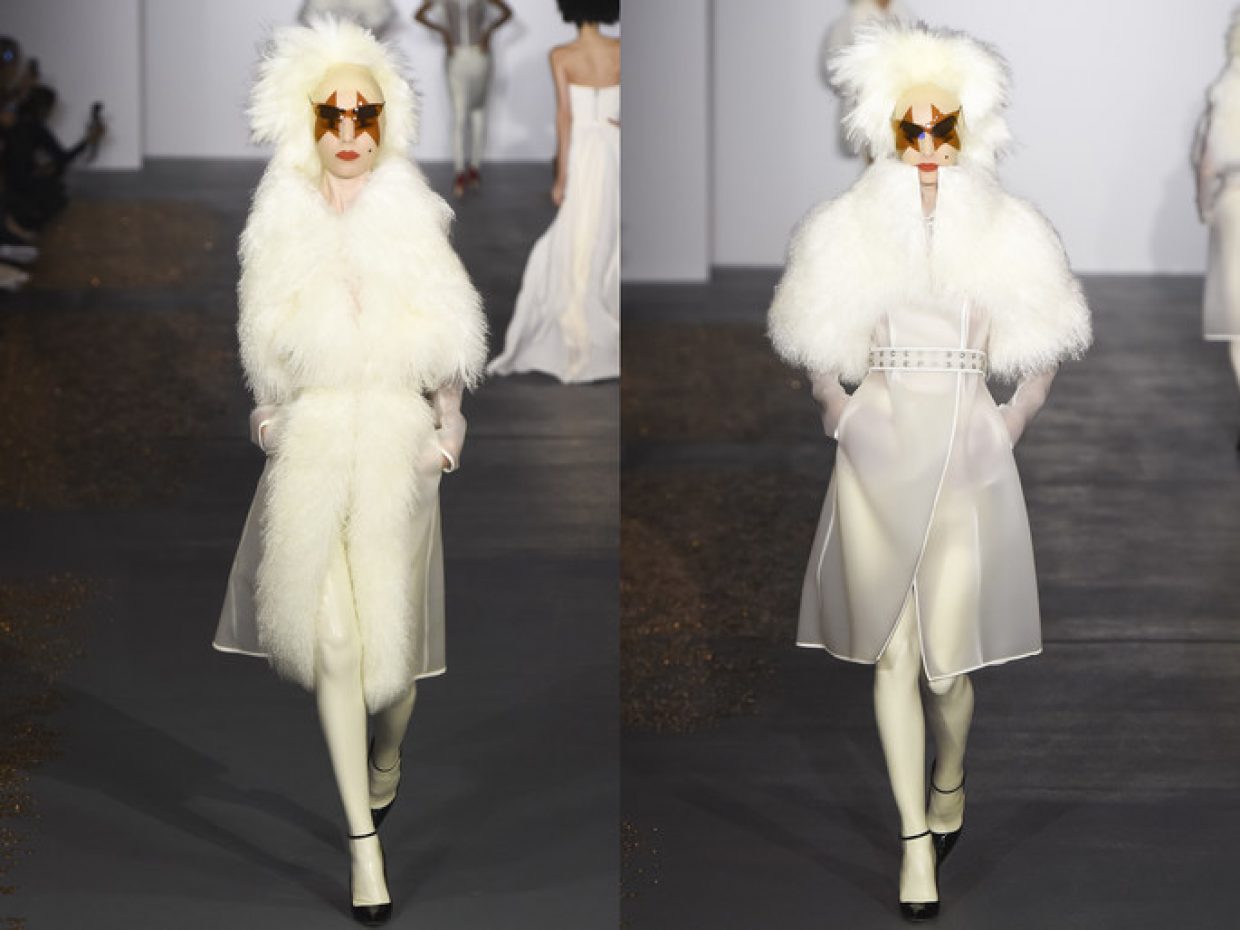 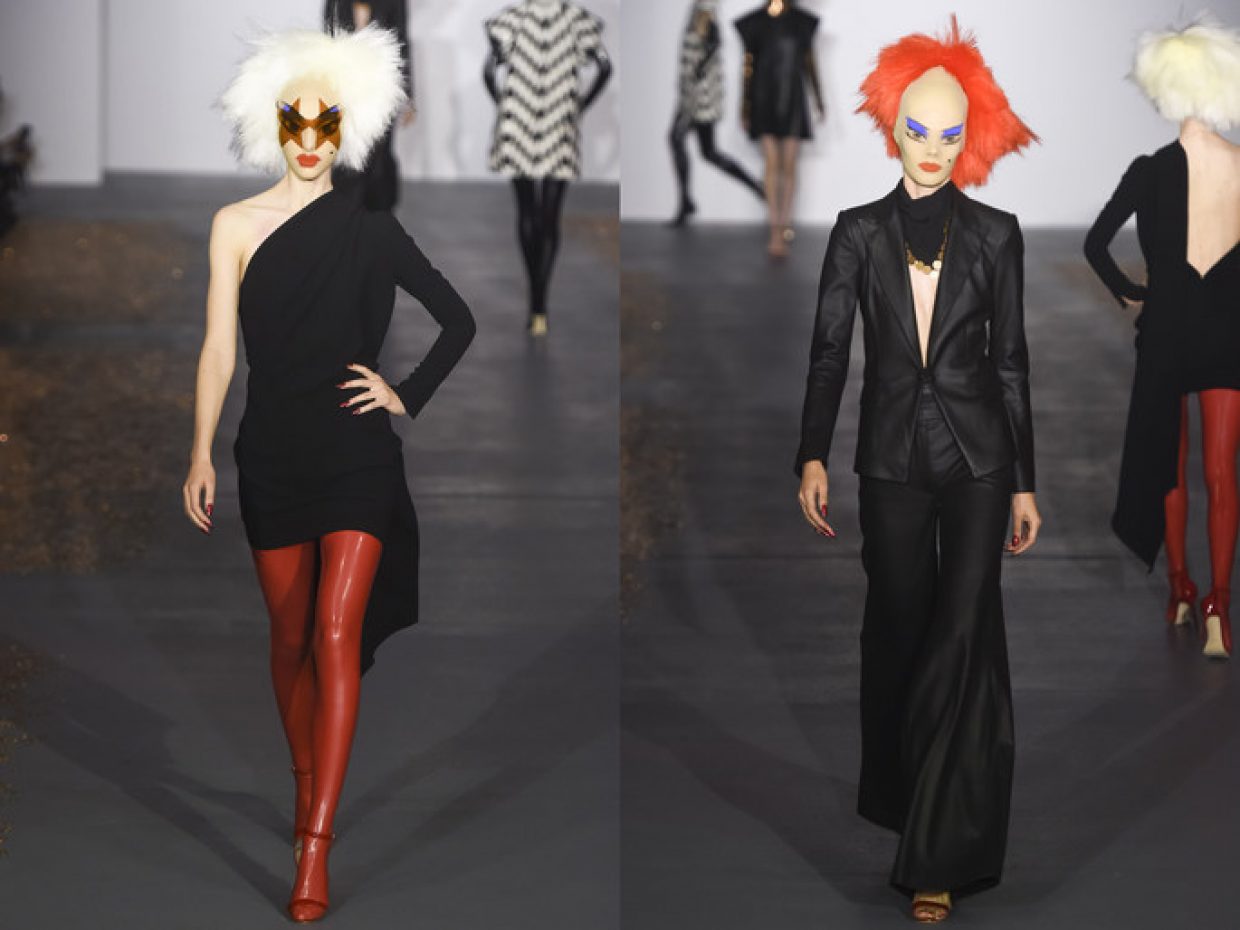 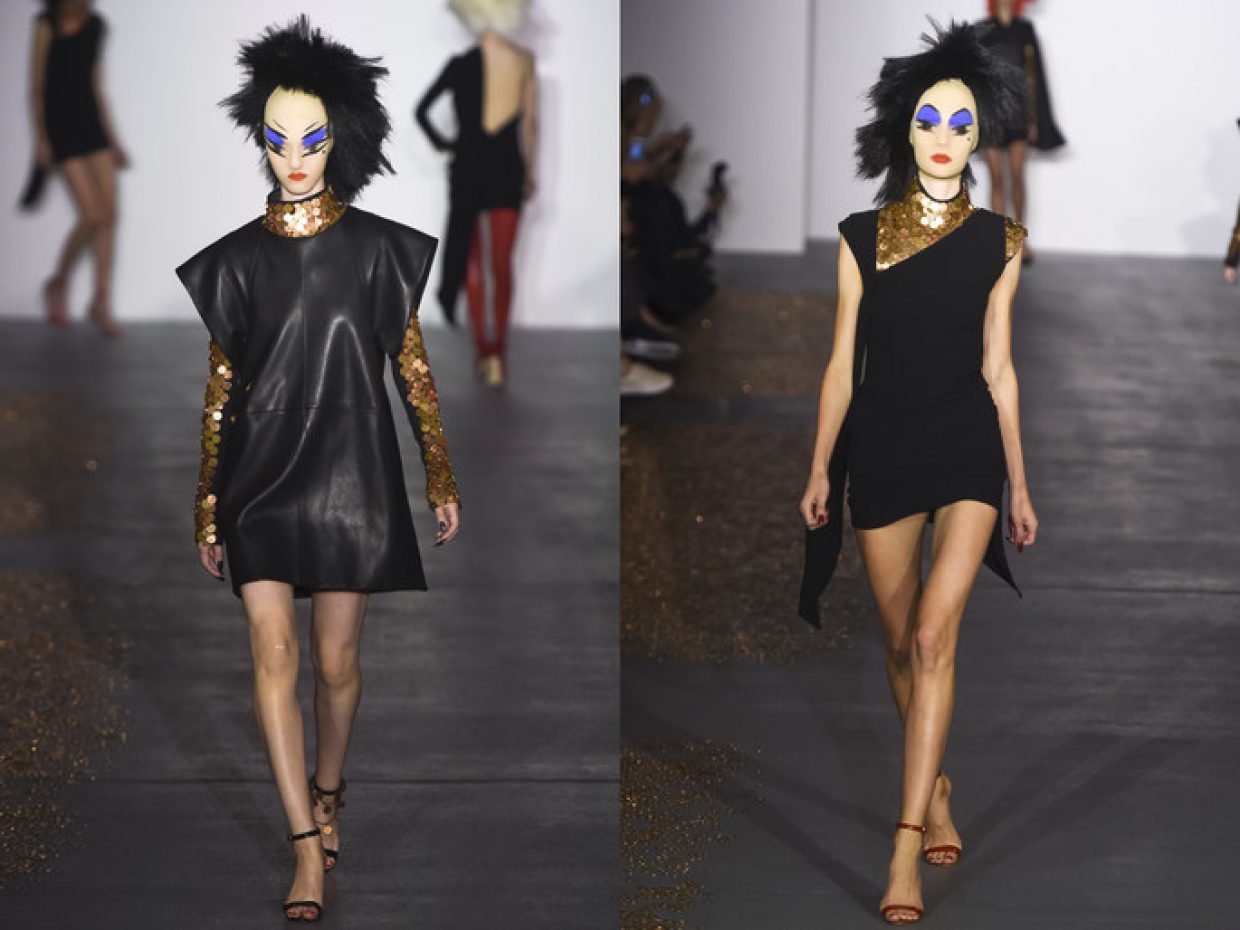 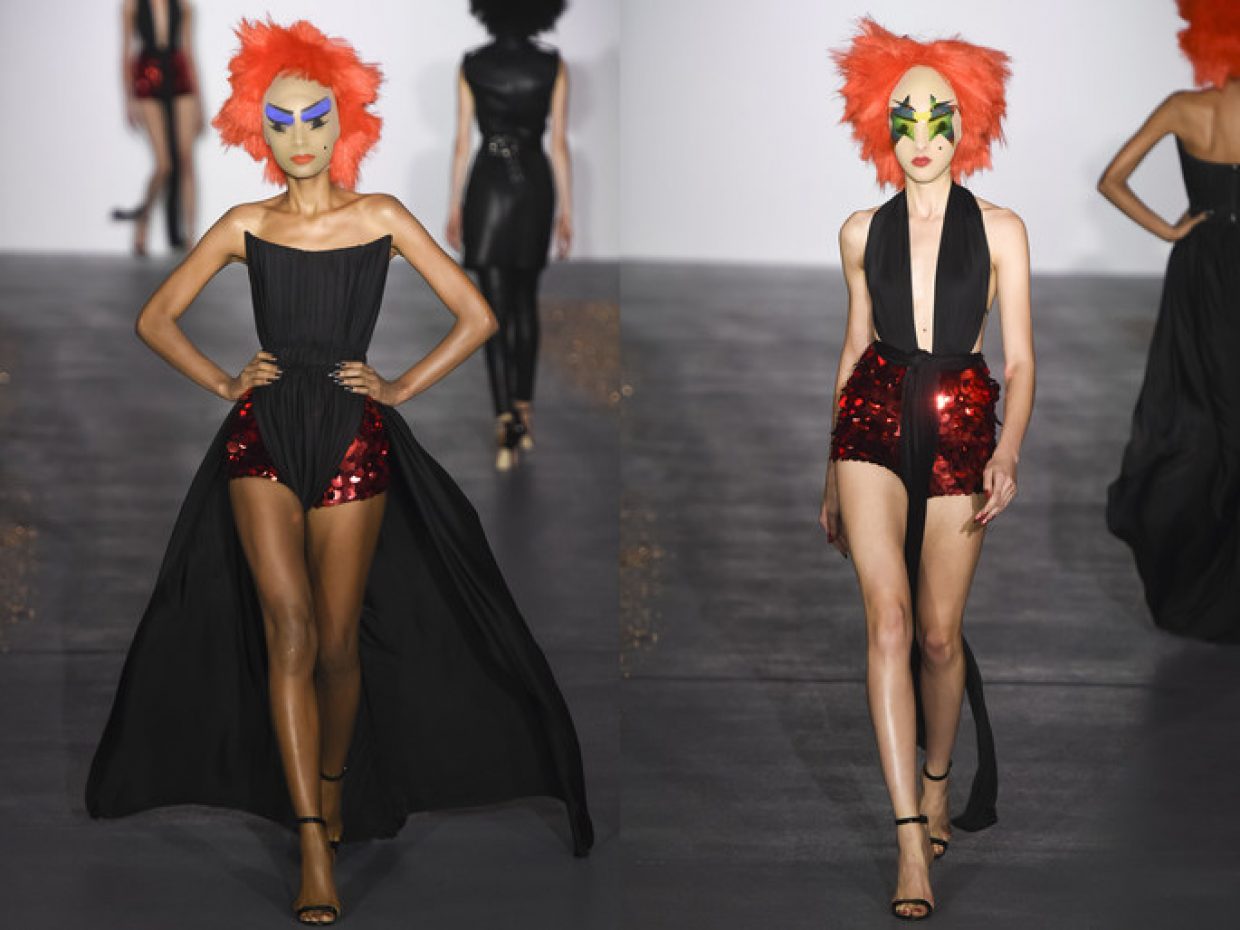 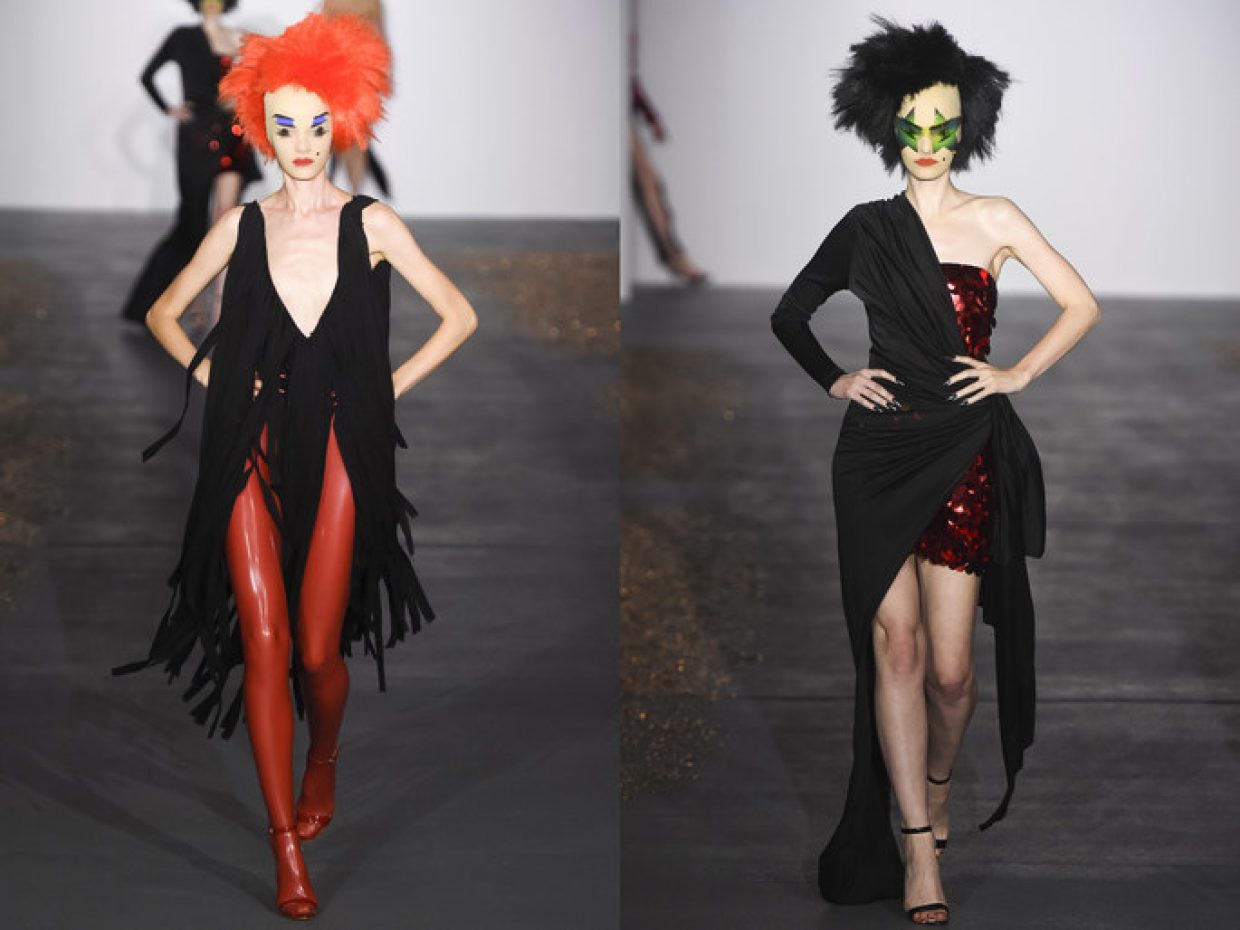 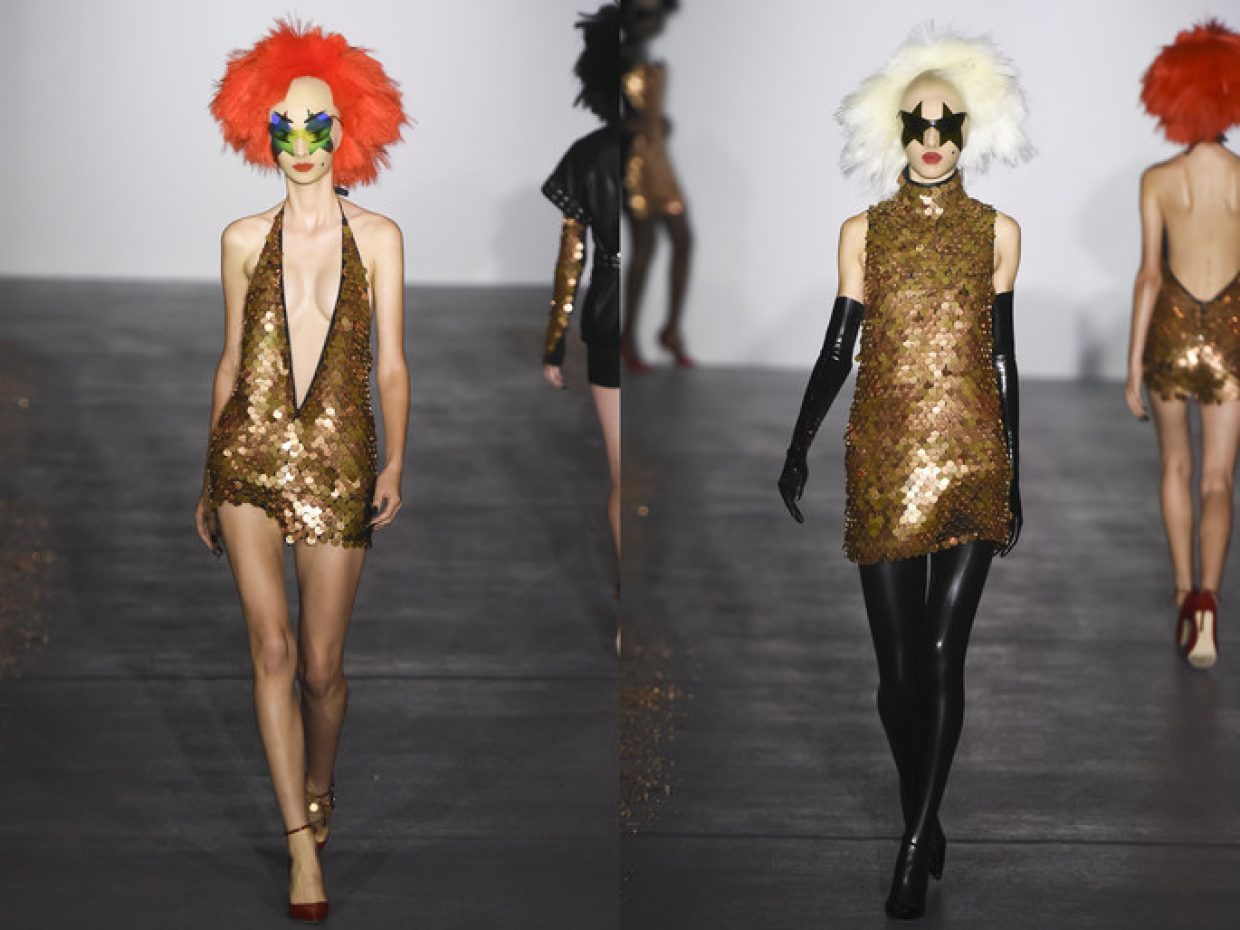 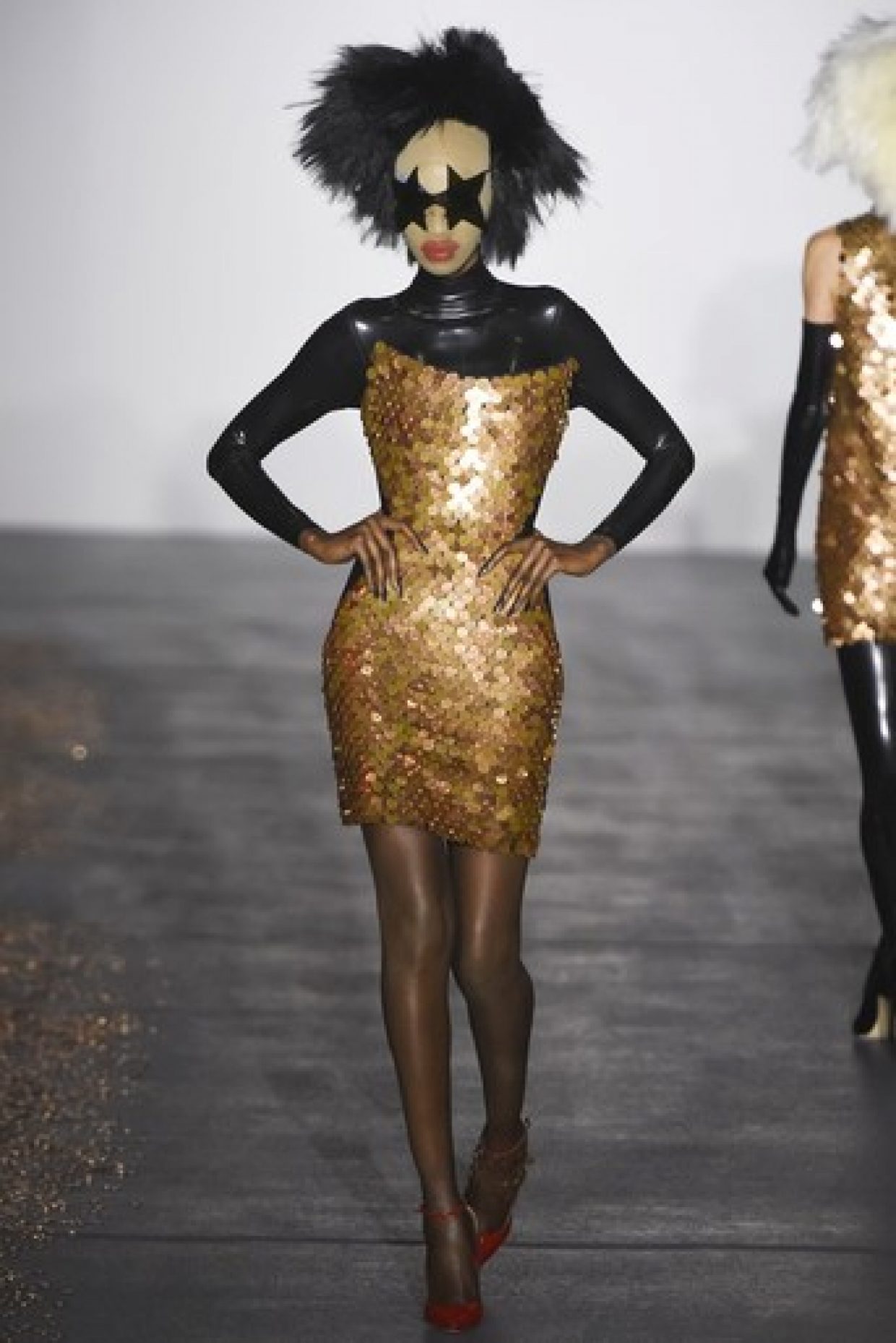 “You’re so money.” Recall, if you will, that unforgettable line from Swingers, delivered in the midst of a pep talk at a nightclub. Money is the primary way we denote value in our society. “You’re so money” meansyou have so much value. You are so very good. Gareth Pugh’s latest collection was so, so money. Literally, in that there were actual pence coins sewn onto the clothes—a gesture that, in a different collection, you’d be tempted to read as a statement about luxury, or something along those lines. But Pugh’s money wasn’t raising questions. It was proposing a solution: Go out. Go ballsout. Dress to the nines, as though everything this world has to offer belongs to you, because it does. You can buy whatever you want with the currency that is you. Be extravagant with yourself, and for god’s sake, have fun.

The high spirits of this collection, meanwhile, raised a question: What on earth got into Gareth Pugh this season? Heading backstage after this exuberant, brilliantly styled show, you half-expected to find Pugh bouncing off walls and singing the praises of a new cocktail of serotonin reuptake inhibitors or, better yet, a new love. The truth was rather more prosaic. Pugh was up to some point-making here: We each contain multitudes, was his message, and reputedly dour Gareth Pugh is perfectly capable of putting his well-developed design muscles to work in the creation of a collection with a disco mood, just as the Gothic Gareth Pugh babes he’s cultivated see fit, once in a while, to slough off their cares and paint the town red.

Red was Pugh’s signature color this season. The color pulsed through numerous looks, from the impeccably tailored silk faille suits, with their flared, attenuated silhouettes, to the paillette-covered short-shorts made for shimmying. The paillettes made perhaps their most stunning appearance in a trim black trench coat—the way the sequins dappled about the coat’s chest and shoulders suggested the movement of strobe lights dancing over pitch-colored clothes. The nightclub atmospherics extended into Halston-esque draped dresses and looks in a black-and-white diamond patterned jacquard that conjured the undying incandescence of club deity Leigh Bowery. The nightclub energy was present, too, in Pugh’s excellent, Mongolian fur–trimmed plastic jackets, with their frisson of sexual possibility (and perversity). The overall effect was magnificently louche.

Pugh clearly knew he’d be shocking the audience by sending out a collection premised on the pleasure principle. Did he know he’d be showing them perhaps his best collection ever? He probably knew that, too. Pugh should engage his gaudy side more often—here he demonstrated that his rigor as a craftsman can turn pretty much any look into pure class. His artistry is so money. And Pugh has more where that came from: He can afford to spend freely.