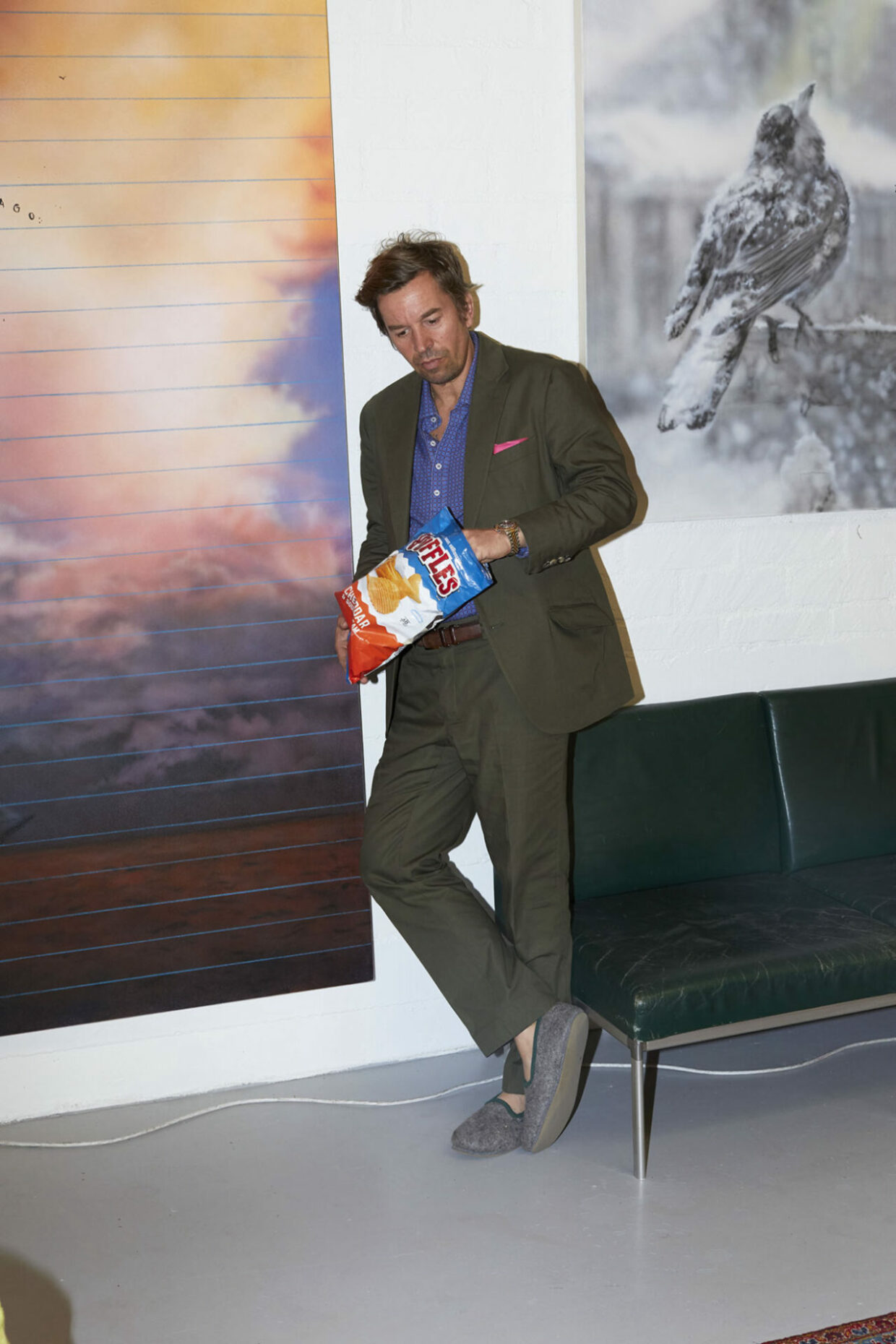 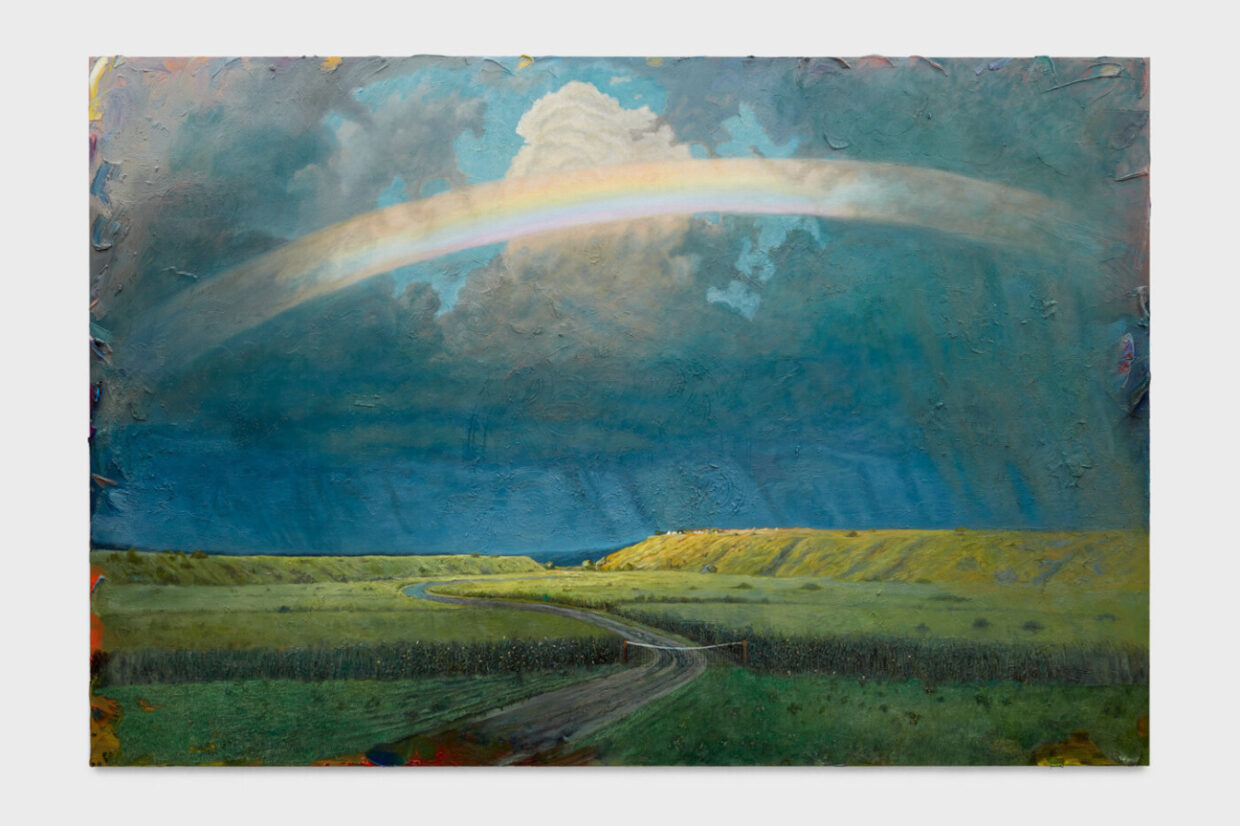 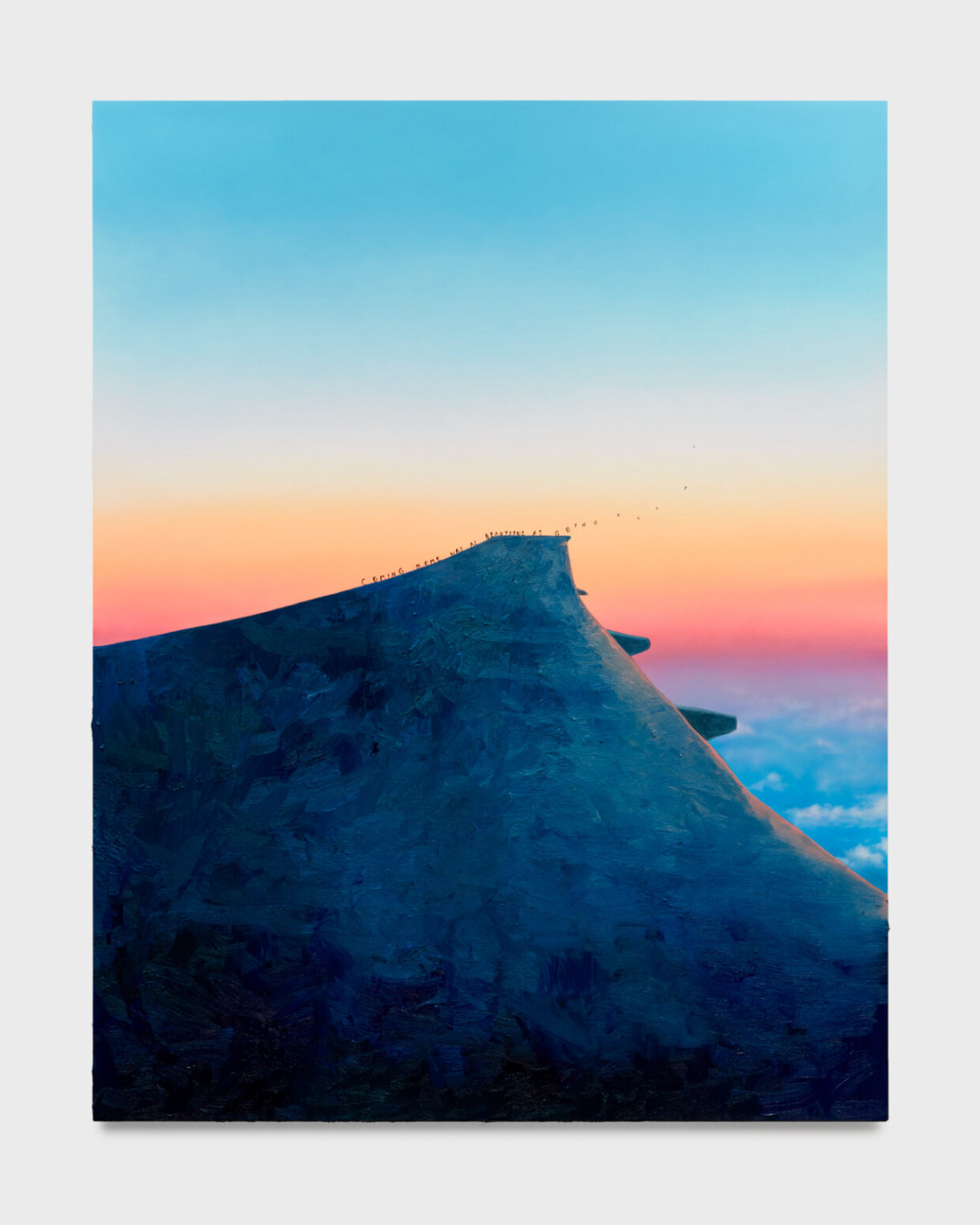 Friedrich Kunath’s work is as deeply saturated with passages of rich blue afternoon sky, crepuscular haze, and sculptural ridges of mountainous rock blanketed sublimely in falling snow as it is full of misery, ecstasy, and humor. The artist’s profound emotional honesty marks him as immediately abnormal in a contemporary art world where feeling is regarded more often as an unfashionable curiosity than the very substance of expression. But it is this quirk—a total embrace of sentiment in all its hues—that makes Kunath’s paintings so undeniably and unexpectedly effective. In over 20 excellent canvases, all painted within the last year, he imagines impossible landscapes in his new show at Blum & Poe Los Angeles “I Don’t Know The Place, But I Know How To Get There.”

The works force the pastoral glory of 18th and 19th century renderings of the Bavarian Alps by German Romanticists to share the picture plane with the same flashes of Los Angeles’s absurd urban beauty that streak by us beyond the windows of our cars while we trudge through congested freeways or that we tap past on our cellphones while watching the Instagram stories uploaded by whoever happened to hike Runyon at sunset on any given day. Palm trees and telephone poles jut into yawning highland valleys appropriated from the canon of Western aesthetic perfection, as Kunath churns majesty and the mundane together into candy-colored dreamworlds that reflect on personal longing and our eternal, ill-fated quest for contentment. These fictional vistas are frequently overlaid with fragments of handwritten text. Pithily profound and written in the second person, they recall the lyrics of pop-anthems that simultaneously give form to our deepest fears and desires, even as they embody the hyper-plasticity of culture in all its superficial, vacant brilliance.

Kunath’s application of oil is highly idiosyncratic: misty nebulas of swirling storm clouds sit overtop sheets of thick impasto so heavy they slip off the painting’s surface, forming topographic bulges that have nothing at all to do with the images they bear. But unlike Vincent van Gogh, who exaggerated paint into similarly sensuous globs in his highly textured images with the goal of drawing out the hidden essence of his subjects for the viewer, Kunath seems to employ the technique almost arbitrarily or indiscriminately in his work. In Return To Forever, 2022-23, for example, a rainbow stretches from one side of the horizon to the other, uniting an idealized image of the heavens into a perfectly calibrated symbol of natural harmony, and yet a subcutaneous layer of blisters and sores, variously carved into the paint or built up with it by Kunath, emphasizes the picture’s artifice, and casts into relief the disjunction between what is depicted and the emotional associations projected onto it.

Born in 1974 in East Germany, Kunath’s migration to Los Angeles was motivated in part by the aura of freedom and possibility the city appeared to ooze even from across the Atlantic, the artist tells me. He grew up in a tight-knit community of Bohemian artists and musicians that he experienced as utopic—that is until the wall came down in 1991. With the fall of the Soviet Union, it was revealed to him that the network of creative people his family was a part of had long been infiltrated with Stasi informants gathering information on each other to satiate the authoritarian regime’s hunger for ideological control, a revelation that came as an incredible betrayal. A foundational unease, perpetual fidgeting, and instinctive suspicion of all things serene pervades his psychologically-informed artwork.

LA, a factory town whose primary export isn’t cars but media and manufactured fantasy, was irresistible for Kunath, who relocated to the West Coast decades ago and has remained here for the better part of his life. In the past year, however, he began going back and forth between his native Deutschland and California with the idea of possibly returning to his motherland for good. For Kunath, this new exhibition is the product of that period of constant displacement and continual motion where he battled a relentless yearning to be at home, if only he had any idea where that was. One of the most compelling pictures in the show appeared to me at first as a familiar, if not simplistic, rendering of a gallant mountain face rising into the stratosphere. Upon closer attention, you realize the angular, geometric form is the wing of a plane. You can almost envisage Kunath peering out of the aircraft’s portal from a window seat, contemplating the firmament as it passes by beneath him, heartsick, searching, and adrift. The work’s title, Coming Home Was As Beautiful As Going Away, 2022, is spelled out on the far edge of the hulking mechanical appendage, the words bluster apart the fleeting elucidation they provide, evaporating into the air.