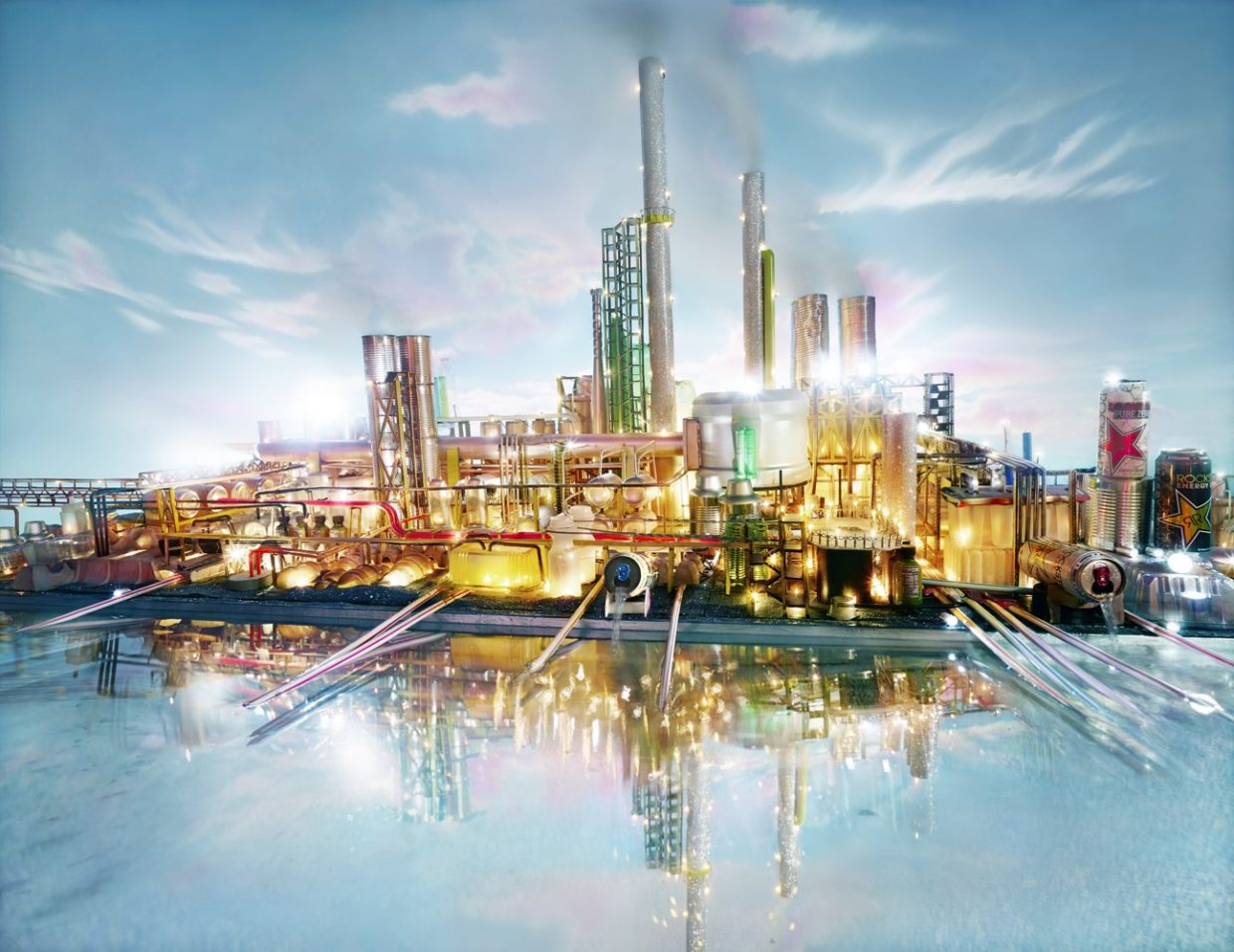 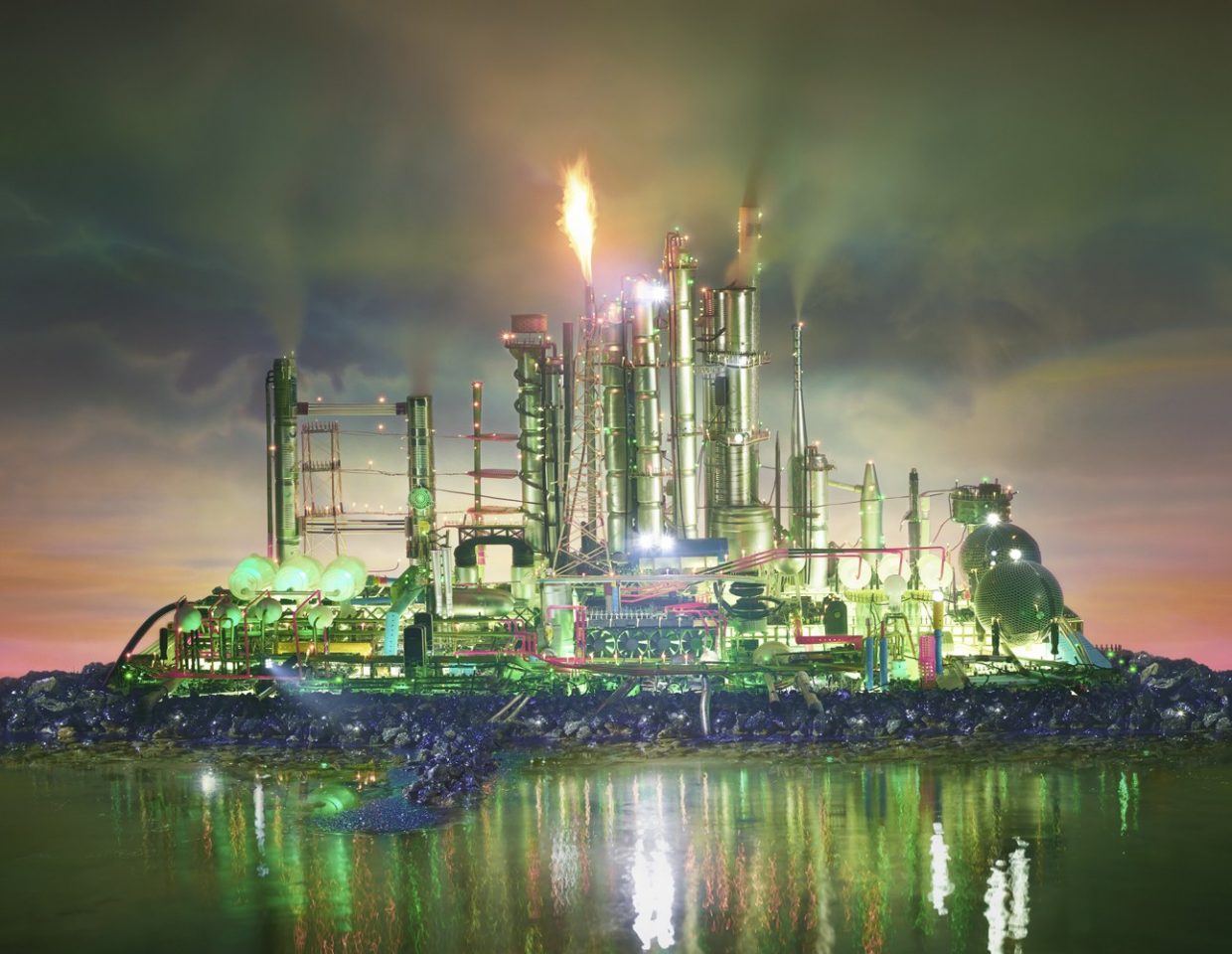 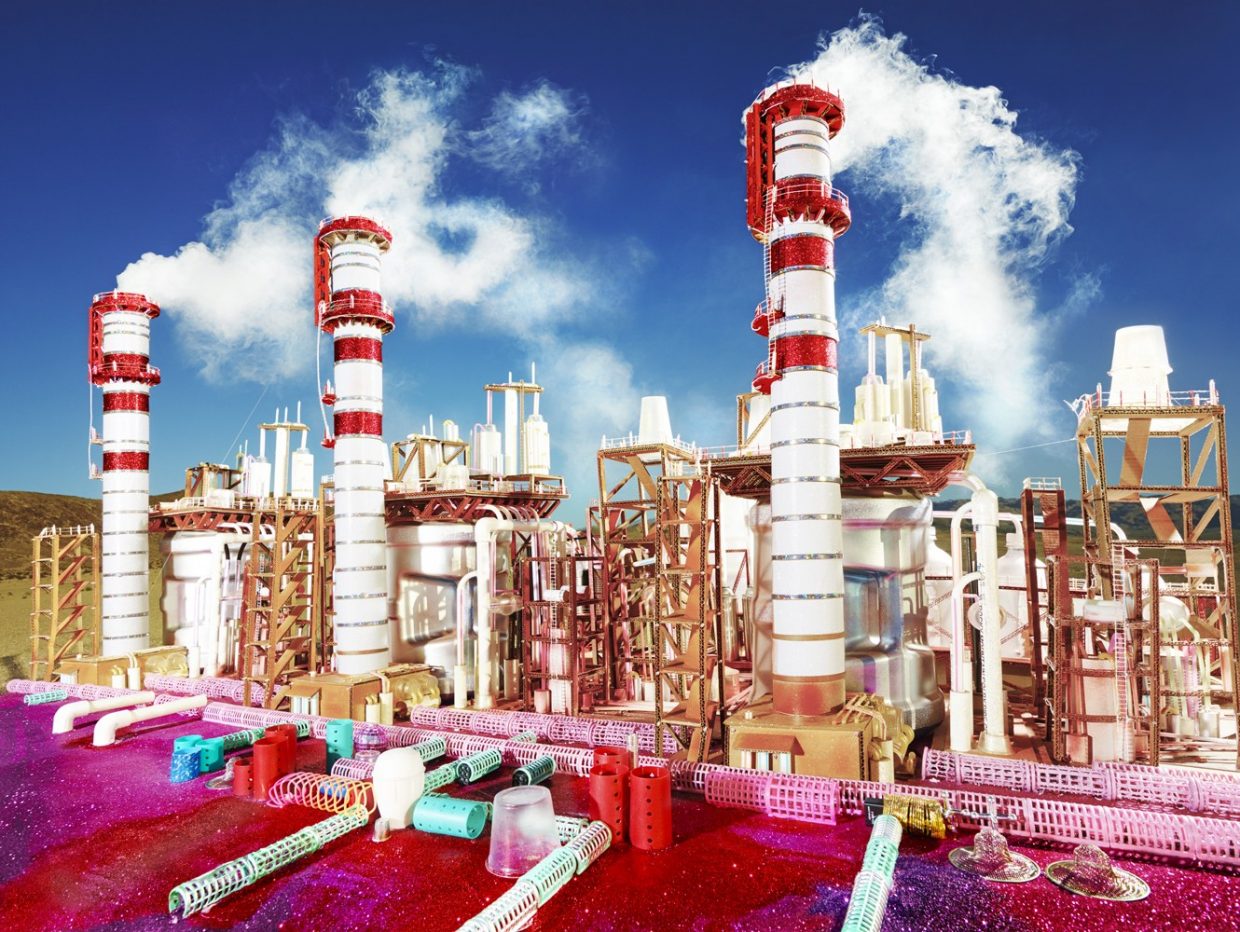 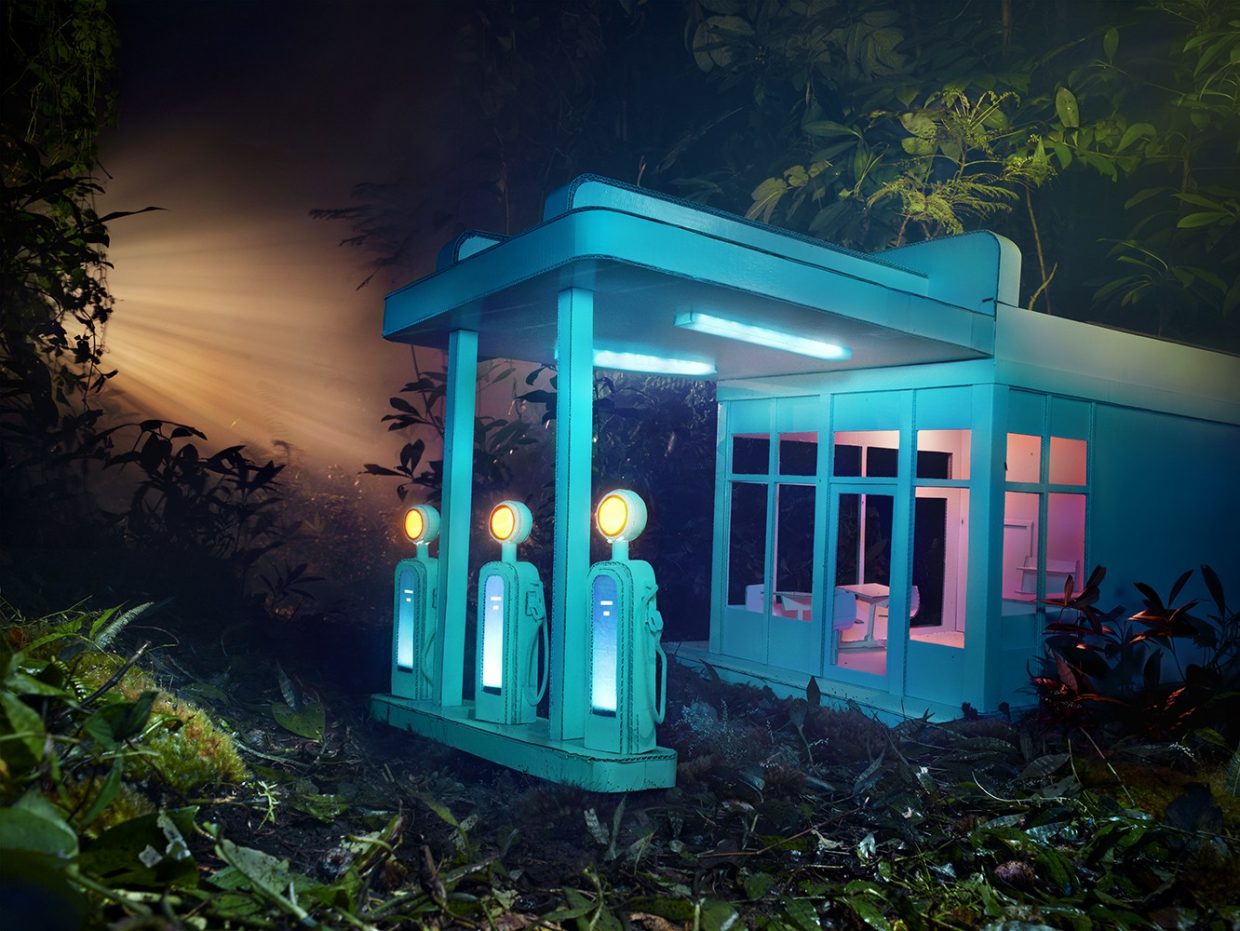 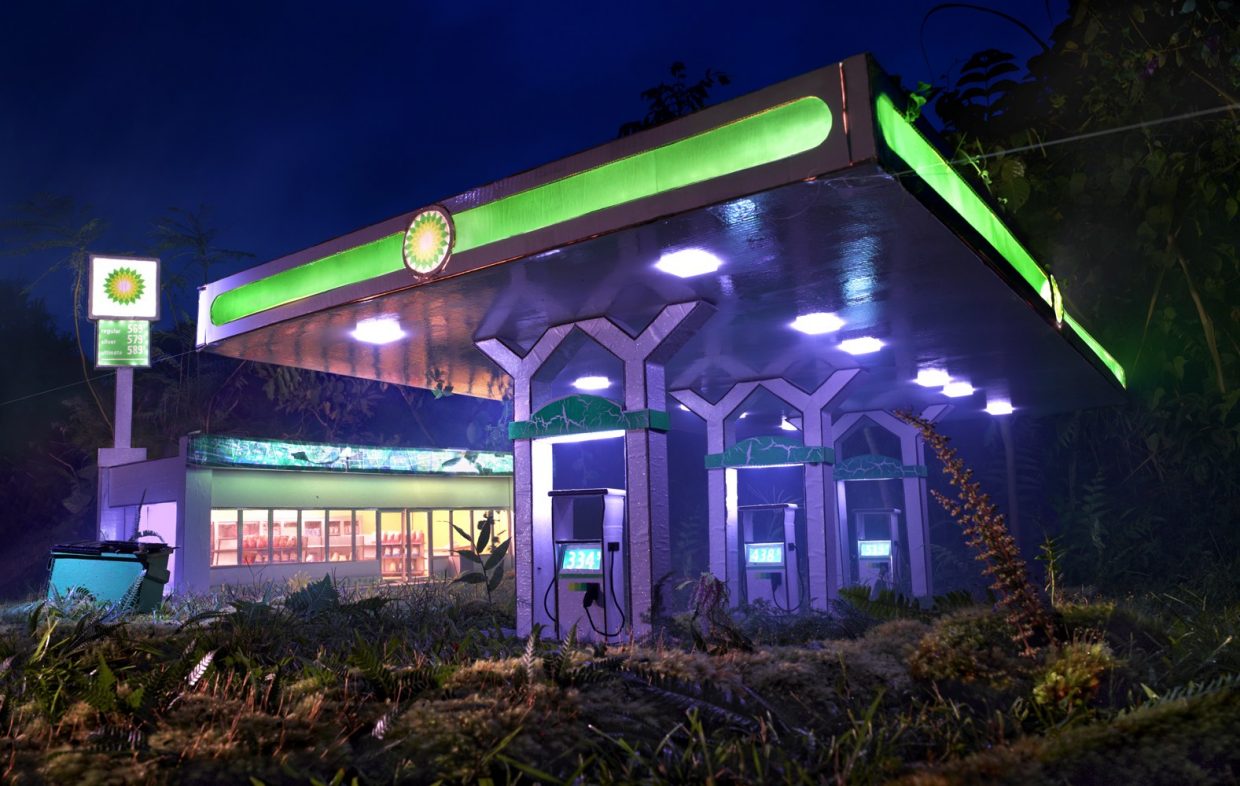 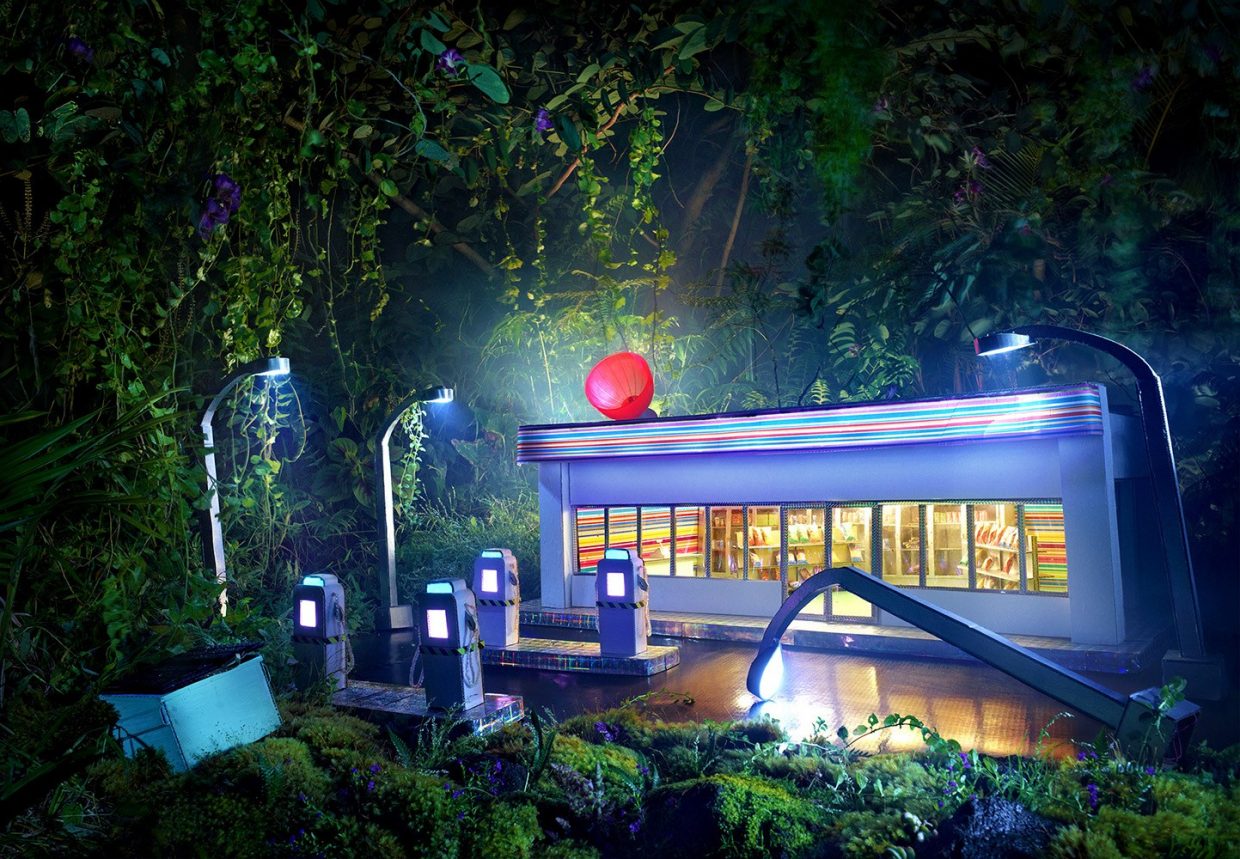 “The sites depicted in LaChapelle’s LAND SCAPE represent the globally networked industrial infrastructure of oil production and distribution. The gas stations and refineries that populate iconic locations are staged as architectural avatars of a planet coping with the stresses of peak-oil — even as the buildings’ dazzling spectacle and retro-future aesthetic distracts from the dangers of their function. Both bodies of work use handcrafted scale models, constructed of cardboard and a vast array of recycled materials from egg cartons to tea canisters, hair curlers, and other by-products of our petroleum-based, disposability-obsessed culture.” —Shana Nys Dambrot, LAND SCAPE

The Gas Station series was shot on location in the rainforest of Maui, and the Refineries were photographed in the expansive deserts and along the majestic coastlines of California. In the Gas Station photographs, the rain forest envelops the fueling stations acting as an organic force that is both generative and destructive; it represents the source of fossil fuels, but it also has the power to re-engulf these man-made creations. Their eerie, subtly surrealist lighting and composition suggest art-historical influences from Edward Hopper to Ed Ruscha.

In the Refineries series, LaChapelle treats these scenes as shrines to the product and the lifestyle it makes possible. Bathed in an ethereal light and aglow with an otherworldly quality, we are as captivated as we are repelled. While decoding the construction materials and contemplating the surroundings provides delight, what the artist would like us to remember are the decidedly unmagical consequences of what occurs in the refineries.

LaChapelle draws on an immense lexicon of art historical references, current events, and popular culture, to make visually compelling images, each unique in their narrative and evocative content. His work is included in numerous public and private collections, and has been exhibited internationally at museums and institutions including the Musée D’Orsay, Paris; the Brooklyn Museum, New York; the Museum of Contemporary Art, Taipei; the Tel Aviv Museum of Art; the Los Angeles County Museum of Art (LACMA); The National Portrait Gallery, London; and the Fotographfiska Museet, Stockholm, Sweden. The National Portrait Gallery in Washington, DC will include LaChapelle’s work in the show American Cool, February – September 2014. LaChapelle lives and works in Maui, Hawaii.