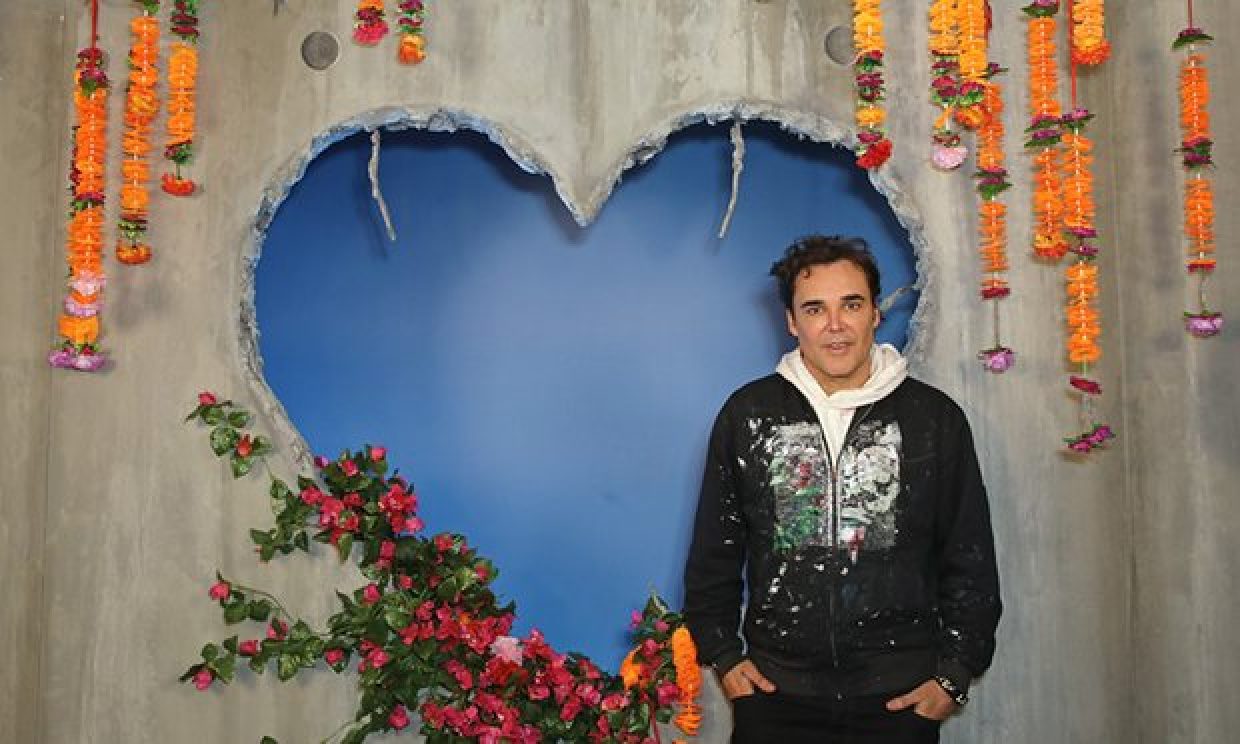 David LaChapelle: Can the king of hyper-real photography help heal the world?

David LaChapelle is sitting on a black leather sofa in a studio in Shoreditch, east London, rattling through a mind-boggling range of subjects: the fall of Rome, the 1966 Texas University shooting, the metaphysical theories of writer Marianne Williamson. He compares the vilification of Donald Trump at the Golden Globes to Hitler’s rejection by the Academy of Fine Arts Vienna. Then he reaches a crescendo, celebrating the progressive attitudes of America’s founding fathers: “Jefferson travelled more than George Bush, and this was before they invented aeroplanes,” he says. “These were worldly people. They had an organic garden!”

I have been interviewing LaChapelle for almost 20 minutes and have yet to ask a single question.

In the 90s, LaChapelle’s glossy, colour-saturated photography made him as famous as the celebrities he worked with. He shot for every fashion magazine worth mentioning and had Christina Aguilera writhing in chaps for the Dirrty video. His greatest hits included Courtney Love modelled after Michelangelo’s Pieta, celestially backlit and cradling a Kurt Cobain lookalike in Christ loincloth, and Naomi Campbell recreating Botticelli’s Mars and Venus, satyrs swapped for child soldiers. His work hit the sweet spot between sheen and social commentary. Understatement wasn’t really his thing.

In 2006, LaChapelle stepped back from celebrity and magazine shoots and moved to Maui, Hawaii, to focus on fine art photography. Now he lives in LA and occasionally takes on commercial projects he feels passionate about, such as the Diesel campaign that brings him to London. Badged “Make Love Not Walls”, it centres on a band of shiny, happy people – gay, straight, transgender, multiracial – breaking a heart-shaped hole through a barbed wire-topped wall using an inflatable rainbow-coloured tank, while pink smoke billows in the background. The hole fills with colourful flowers and serves as the backdrop for a gay wedding at which one of the grooms wears a keffiyeh-like headdress fashioned from denim.

LaChapelle’s aesthetic is so unforgettable that when we meet I half expect to find him bare-chested and covered in oil, with a herd of elephants and stack of gold bars in the background. In fact he is dressed head-to-toe in immaculate black athleisure – a black hoodie, tracksuit bottoms and T-shirt – and wears a black wooden bangle with the word “Love” carved into it, with line tattoos covering his fingers.

The wall in the Diesel campaign was a metaphor partially inspired by Trump or, as LaChapelle describes him, “this crazy lunatic talking about building a wall in Mexico”. When they shot the images, however, “none of us thought it was actually going to happen”. Since then, he says: “Everything has changed in America. People are shellshocked.”

LaChapelle, now 53, was a Studio 54 regular in his youth – Andy Warhol gave him his first job, at Interview magazine in the 80s – and he crossed paths with Trump on the New York scene. “I was repulsed by this guy,” he says. “And I’m not saying that in retrospect – when I was 21, I could not stand him. He was always, always after the celebrities.” Trump’s victory, he continues, “is giving people the permission to be mean. It’s ‘greed is good’, this Bonfire of the Vanities idea of society where the bully wins”. He launches into another dizzying speech that spans his Lithuanian mother’s arrival in Ellis Island during the second world war (“She didn’t talk about it much, it was very painful, but I read books and you think, how can this happen?”), reproductive rights, Obamacare, Sandy Hook, Bob Fosse’s Cabaret, the bleaching of the world’s coral and the theory that: “They say that what enabled us to survive as human beings was our ability to adapt, but that may also be our downfall.”

This is a pertinent time for LaChapelle to return to high profile commercial work, aesthetically as well as politically. Echoes of his style can be seen everywhere, from the gilt walls of Mar-a-Lago to Snapchat filters to Beyoncé’s Instagram feed, on which a very David Lachapelle-ish image of the singer – glossy and fecund against a wall of flowers – was recently released to announce the singer’s pregnancy. LaChapelle beams when I ask him about it: apparently Beyoncé’s photographer, Awol Erizku, was his intern. “He worked for me for over a year. He had such a great spark, he was so enthusiastic. You can see – this one’s really got it.” He puts his current influence down to the fact that “all those kids that were buying the books then are maturing, and the crew that were resistant to it are kind of retiring or moving on to the next chapter or … they’re not alive, ha! I started really young, luckily.”

LaChapelle does not argue that one fashion campaign can solve the world’s current problems, but he clearly believes that imagery can be very powerful. He cites the reaction to his first campaign for Diesel – a 1995 recreation of the famous 1945 Victory photograph, featuring two male sailors kissing – as an image that “actually made a positive change”, which motivated him to work with the brand again.

This is an attitude echoed by Diesel’s creative director, Nicola Formichetti – the Italian-Japanese stylist who oversaw Lady Gaga’s look during the meat-dress years – who approached LaChapelle with the idea of shooting an advertising campaign with particular meaning this year. “I think it’s my duty to celebrate diversity and as much as possible to educate people,” says Formichetti. “We have a voice – we have a loud voice – and we have to use it in a positive way.”