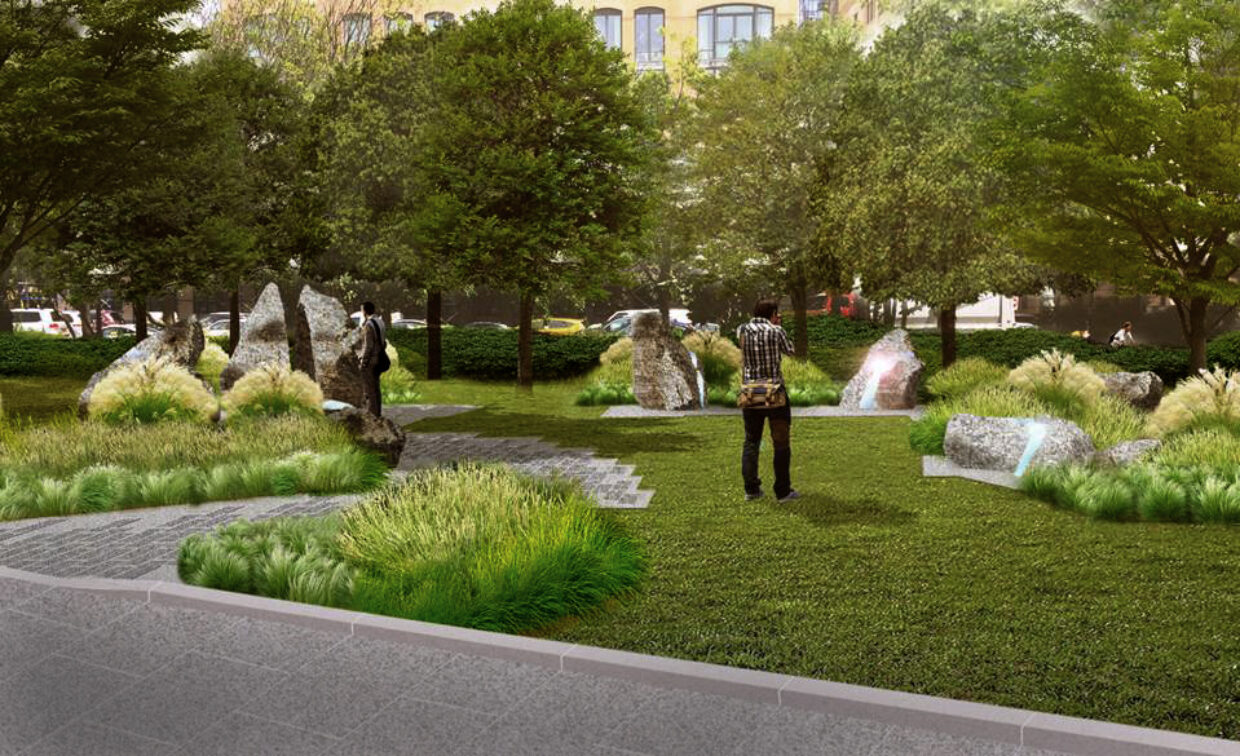 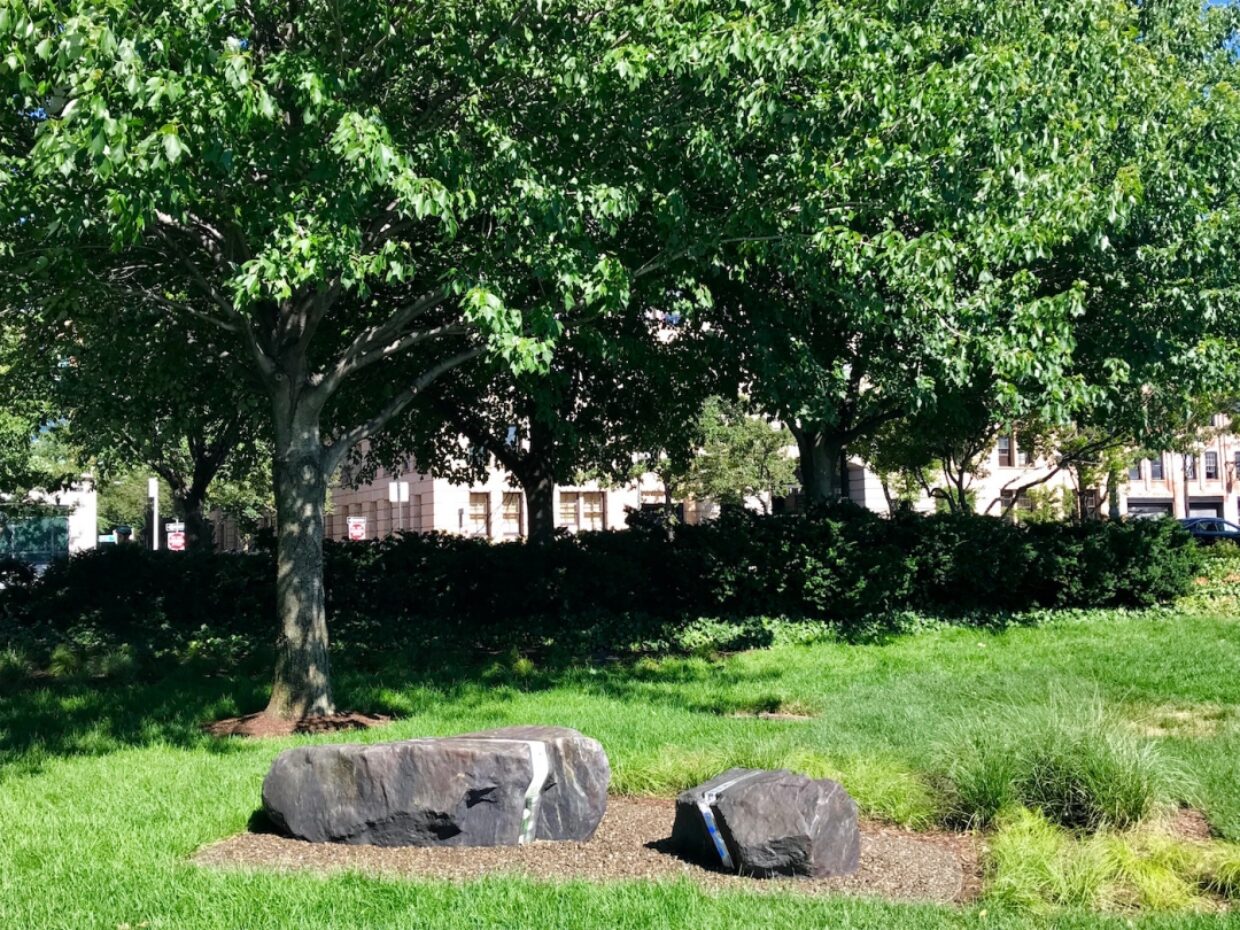 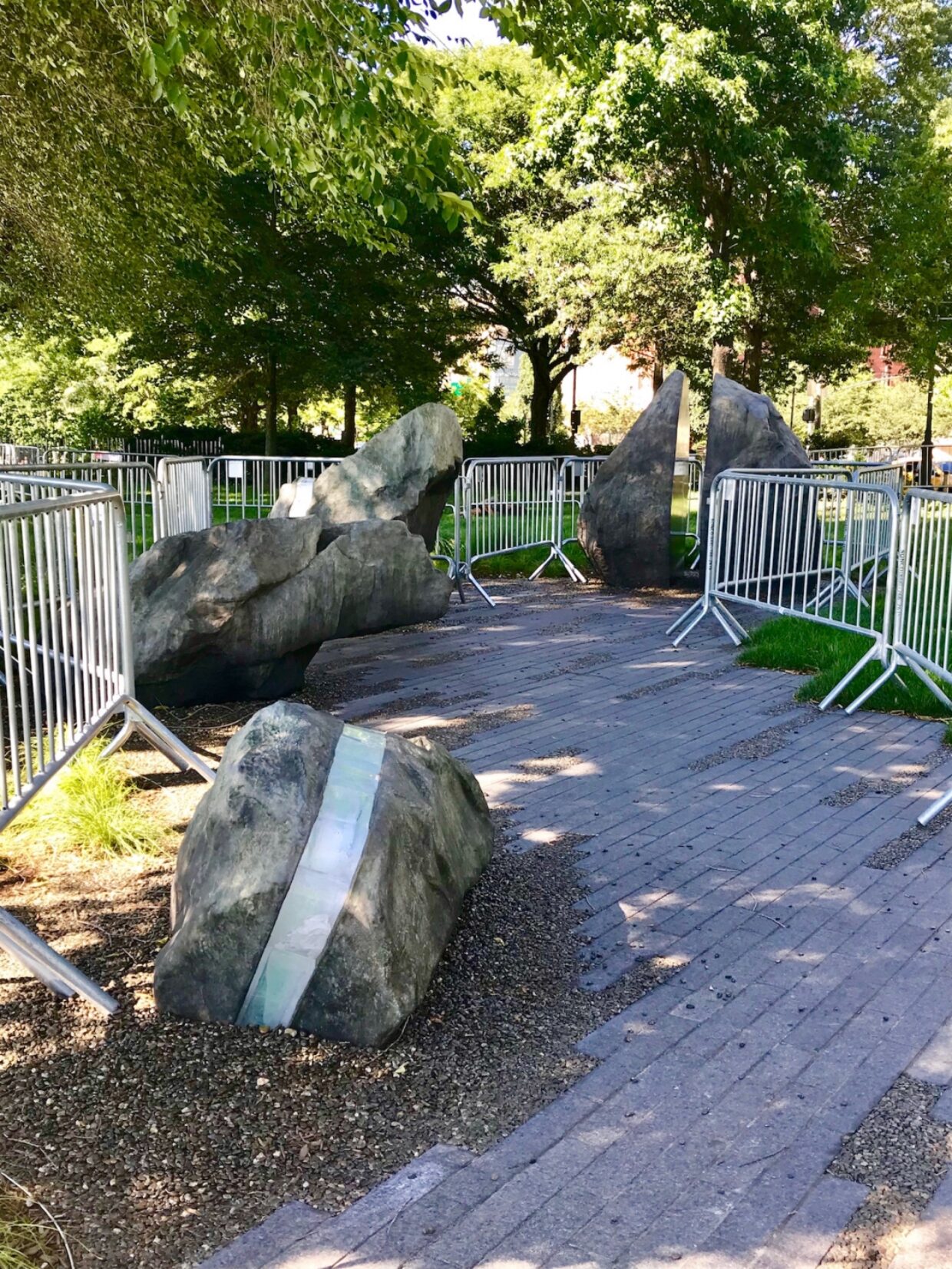 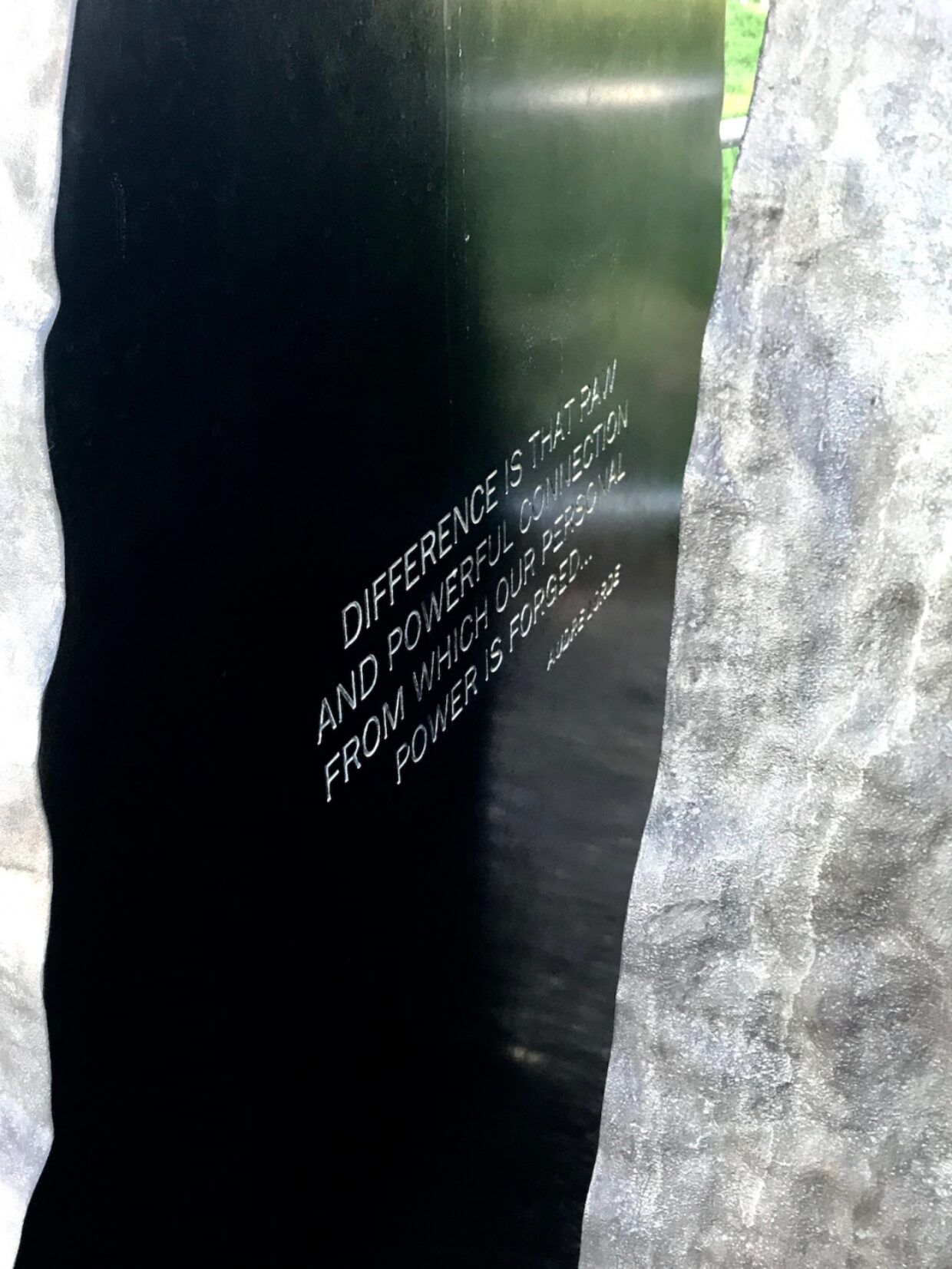 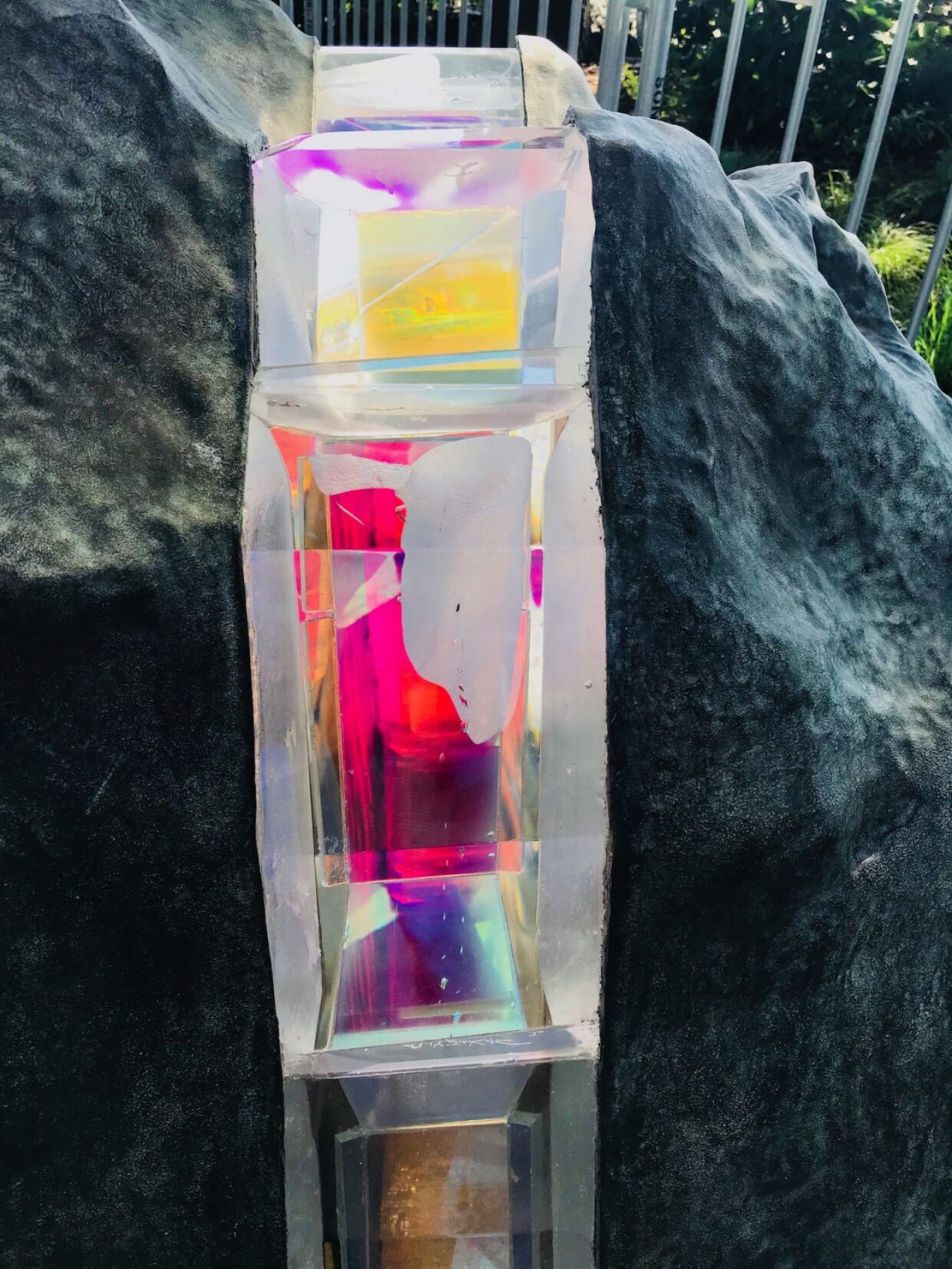 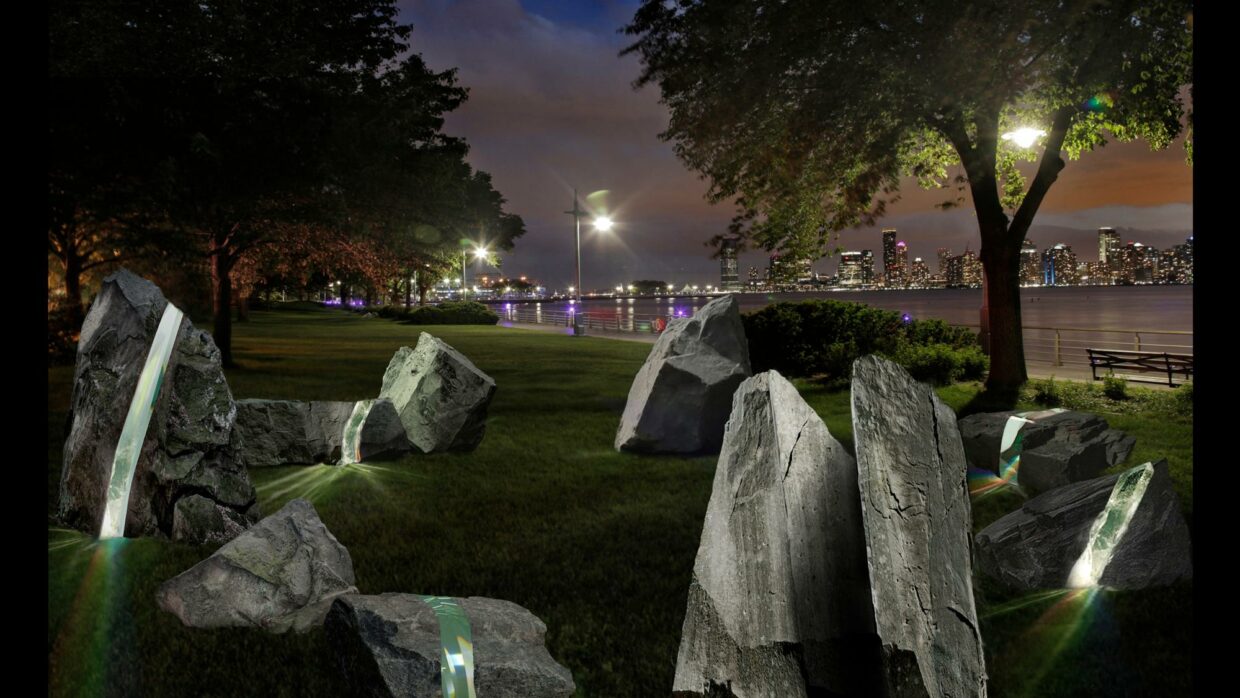 Nearly a year after it was first announced, New York City’s first official memorial dedicated to the LGBTQ community is set to debut in Hudson River Park. Governor Andrew Cuomo, along with City Council speaker Corey Johnson, Senator Brad Hoylman, and other elected officials, unveiled the monument, two years in the making, which is intended to honor “the LGBT community, those lost in the Orlando Pulse nightclub shooting in June 2016, and all victims of hate, intolerance and violence.”

Located on the waterfront, roughly between West 12th Street and Bethune Street, the memorial comprises nine large boulders that sit in a circular pattern. Six of these boulders are bisected and then bonded together again with glass.

“Traditionally glass is something delicate and fragile, but here it is used to make the boulders stronger,” Anthony Goicolea, the Brooklyn artist who was commissioned by New York state to create the memorial, told Curbed in a recent phone conversation.

The glass was also used for its refractive qualities—the rainbow is an icon in the LGBTQ community, and when the light hits the glass properly, it projects subtle, colorful patterns. Goicolea recently saw a rainbow reflected on a foreman’s arm at the West Village site, where both the artist and workers have been adding the finishing touches in anticipation of the unveiling.

The largest of the six split stones features what appears to be a hollow void but on close inspection reveals an inscription by LGBTQ activist Audre Lorde, which talks about the importance of celebrating each others’ differences. This inscription, according to the artist, is the monument’s “inner voice.”

Its location in Hudson River Park is especially meaningful for Goicolea. When he first moved to New York City a couple of decades ago, he would often run through the park and past the Christopher Street piers, where the city’s LGBTQ community has long congregated. Goicolea grew up in Georgia, and had never quite experienced LGBTQ life being celebrated so openly; the community he found offered a sense of belonging and family, and so the memorial is also a poignant nod to that slice of his past. It faces the old piers, as well as the Statue of Liberty—another beacon of freedom.

It was also important that the sculpture react with the built environment. Goicolea says that the memorials and monuments that have struck him the most were ones that made sense in regards to their environment. For the LGBTQ Memorial, he wanted to create a space where you feel like you’re in a park and feel a sense of community—the boulders are to sit on and interact with, not to just observe from a distance.

“The people who visit this memorial become a part of it, in a sense,” says Goicolea. “This is more than just about one person.”

And indeed, every visitor will likely take away something different from the abstract piece, which was exactly the artist’s intent. Goicolea designed the monument in such a way that it continues to unravel as you approach, and you’ll walk away with a totally different experience if you spend some time in the lawn and among the boulders.

For Goicolea, the months since he was awarded the commission have been emotional; he says it was incredible to see something he had visualized in his head come to life in a way that was identical to how he had imagined it. He said that he had a gut feeling about the project when he first proposed it (before he was selected by the Governor Andrew Cuomo)—that it would come to fruition in some form or another, in some public space. Now, his dream has been fulfilled.

“The idea of having an environment that reflects who you are and your community is particularly important when so many groups are being squashed today,” explains Goicolea. “A place that celebrates diversity is needed and welcome right now, and sends a powerful message.”